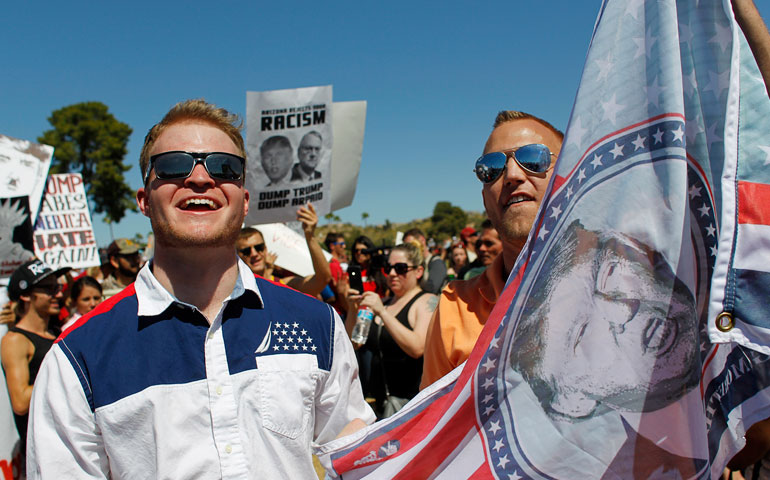 Supporters of Republican presidential candidate Donald Trump hold up a flag emblazoned with his picture as they stand amid anti-Trump demonstrators during a campaign rally in Fountain Hills, Ariz., March 19. (Newscom/Reuters/Ricardo Arduengo)

WHY THE RIGHT WENT WRONG: CONSERVATISM -- FROM GOLDWATER TO THE TEA PARTY AND BEYOND
By E.J. Dionne Jr.
Published by Simon & Schuster, 544 pages, $30

The godfather of American conservative politics, Bill Buckley, once mused, "I've spent my entire lifetime separating the right from the kooks."

It's no stretch to say that Buckley's once kooky radical right has gone on to become the mainstream of the Republican Party, creating an ideological frenzy and guerrilla warfare against President Barack Obama. But the Grand Old Party has lost the presidency in four out of the last six elections and Donald Trump could further marginalize it.

In Why the Right Went Wrong, E.J. Dionne Jr. has laid out how the party turned sharply to the right and what that could mean to American politics and government.

Dionne recounts how a reflective brand of conservatism was destroyed by endless incantations about shrinking government, lowering taxes, hardcore social values, and genuflecting to American business.

He calls it Goldwaterism, after Arizona Sen. Barry Goldwater, who fostered the turn to the right when he lost the 1964 presidential campaign to Lyndon Johnson.

For the Republicans, politics became "a zero-sum game," writes Dionne. "If it cannot take power, the GOP is committed, on principle, to preventing its adversaries from governing successfully."

They have, in effect, eliminated serious debate about the country's future and made a mockery of finding common ground in policymaking, a key element in what really made America great.

Gone was the serious talk about the nation's future that you could find in the party of Abraham Lincoln, Teddy Roosevelt and Dwight Eisenhower. Gone, too, was the bipartisanship that became the cornerstone of post-World War II foreign policy but now is considered consorting with the enemy. And the last two Republican presidents -- the public-service-oriented Bushes who were in the White House for 12 years -- are now being squeezed out of party history.

But the Republicans still have majorities in Congress and, as Dionne says, could extend this reign.

Senate majority leader Mitch McConnell of Kentucky, a one-dimensional thinker who became the GOP's titular leader, had two goals: make Obama "a one-term president" and make it clear that "this experiment in big government has lasted long enough."

But the congressional leadership was not radical enough and House Speaker John Boehner was hounded out of office by what he called the "knuckle-draggers" in his own party.

America needs serious policy debate to deal with sweeping changes in our lives and a globalized world. But bereft of fresh ideas, the Republicans instead forced on us paralyzing budget battles, demonized the president, and fulminated about executive actions by Obama that have actually solved crucial problems. And the knuckle-draggers shut down the federal government once in the Obama years and twice under Bill Clinton.

Dionne describes how the right wing drove the moderates out of the party and called any less radical approach to conservatism "illegitimate." FOX News became the voice of "conservative orthodoxy" and Rush Limbaugh and other right-wing commentators with their mind-bending distortions of government have done the daily thinking for millions of loyal listeners.

Ronald Reagan remained the all-purpose party icon, though, as columnist Charles Krauthammer has put it, "you can choose your own Reagan." And as president, Reagan gave lip service to many of the ideological commandments he had helped create.

And now a new whirlwind has stunned the GOP establishment, as the tea partiers and others who felt taken for granted and a wide swath of voters angry about politics and government have swallowed Trump's red meat whole.

Fareed Zakaria, writing in The Washington Post, suggests that 2016 could be like 1964, where the party found their radical-right candidate and began putting the more moderate establishment on the run. He speculates that Trump as nominee would turn the GOP into "a blue-collar, populist, nationalist movement with a racial element" and make it a "very different party" from the one that followed Reagan's and now House Speaker Paul Ryan's commandments.

But this would run counter to a new fact of political life that the Republicans have been unable to come to grips with: the need for this aging white male party to broaden its appeal to the minorities who are remaking the electorate. Our biggest state, California, already is about 60 percent nonwhite and a study shows that in four years white children will be in the minority in America's schools.

The Republicans' stabs at "compassionate conservatism" and attempts to appeal to blacks and Hispanics by parading as "job creators" failed to connect. Real reform would mean the equivalent of a political gender change for hundreds of Republican officeholders.

Right now, you need to wash your mouth out with soap if you utter the word "multicultural." And led by Trump's jingoism, the Republican know-nothings and establishment candidates joined forces to turn the presidential nomination into an anti-immigrant hate campaign.

In Why the Right Went Wrong, one of America's most respected journalists has produced a thoroughly documented, eminently readable account of GOP conservatism up to the party's newest turn. But the book needs an addendum, since no one can be sure what effect the Trump revolt might have on party doctrine and its positions on issues. As America is being transformed and social values are changing dramatically, who can say whether the party will ever return to classic conservatism and the more meaningful public debate of policy Dionne sees as essential?

Meanwhile, the cost to all of us of the GOP's obstructing America's urgent needs has been staggering.

When Goldwater declared half a century year ago that "extremism in the defense of liberty is no vice and moderation in the pursuit of justice is no virtue," Goldwaterism was born.

But Goldwater himself was no firebrand. He hobnobbed with Democrats, admired President John F. Kennedy and later gave the Republican right fits over his views, including carrying the banner for gay rights.

Writing just before the newest Republican revolt blossomed, Dionne had this message for leftover thinking conservatives and whoever else may wind up running the GOP: For the sake of their party and "the nation they revere," they need to recognize that "extremism in pursuit of their political goals" is a vice and "moderation in dealing with the problems of governing is a virtue."

[Lewis Wolfson is professor emeritus of communication at American University and a longtime analyst of Washington, politics and the media.]

A version of this story appeared in the April 22-May 5, 2016 print issue under the headline: Kooky turns mainstream.