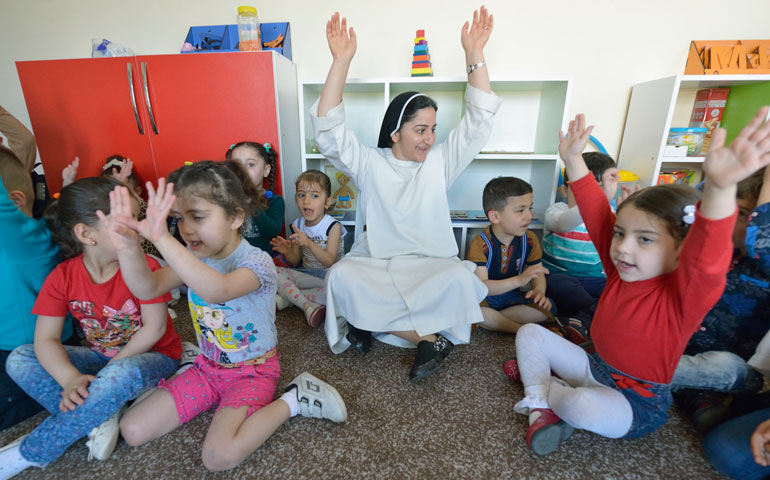 Sr. Ferdos Zora sings along with students April 7 in a preschool for displaced children run by the Dominican Sisters of St. Catherine of Siena in Ankawa, Iraq. (CNS/Paul Jeffrey)

The fate of some 120,000 displaced Iraqi Christians is being held hostage by uncertainty. Since the genocidal attacks by the Islamic State on Mosul, Iraq's second-largest city, and nearby Qaraqosh, its largest Christian city, two years ago, causing a desperate flight to safety in the Ankawa district of Erbil, Iraqi Kurdistan, it's clear that the displaced are not returning home any time soon, as ISIS continues to control both towns. It's anybody's guess as to when it will be safe to return home.

In March, U.S. Secretary of State John Kerry declared that the Islamic State group, also called Daesh, is committing genocide against Christians, Yazidis and Shiite Muslims in Iraq and Syria.

"Daesh is genocidal by self-proclamation, by ideology, and by actions -- in what it says, what it believes, and what it does," Kerry said in a March 17 press briefing.

"Daesh captured and enslaved thousands of Yezidi women and girls -- selling them at auction, raping them at will, and destroying the communities in which they had lived for countless generations," he said.

Christians have been in Iraq since the first century.

U.N. investigators issued a 40-page report, titled "They Came to Destroy: ISIS Crimes against the Yazidis," that sets out a legal analysis of the Islamic State's intent and conduct aimed at wiping out the Kurdish-speaking group, whom the Sunni Muslim Arab militants view as infidels and "devil-worshipers," according to a Reuters report. The Islamic State's campaign against the Yazidis has been aimed at "erasing their identity" and meets the definition of the crime as defined under the 1948 Genocide Convention, according to the report.

The 2014, ISIS attacks caused a massive humanitarian crisis, as tens of thousands of Iraqis arrived in Ankawa with whatever they could carry and the clothes on their backs. Aid came pouring in from the Kurdistan Regional Government, the Federal government in Baghdad, and charities around the globe.

In the U.S., the Catholic church and Catholic organizations rallied to alleviate the suffering and persecution of Iraqi Christians.

In September 2014, Louisville, Ky., Archbishop Joseph Kurtz, president of the U.S. bishops conference, called for a national collection to assist suffering Christians in Iraq, Syria and Gaza. The collection raised close to $9 million, which was dispersed to Catholic Relief Services (CRS), the Catholic Near East Welfare Association (CNEWA) and other organizations.

Aid to the Church in Need and the Knights of Columbus are also significant donor organizations to Iraqi relief efforts.

New York City-based CNEWA has been serving the needs of Christians and others in the Middle East for 90 years. It has acquired a sophisticated understanding of the cultures and customs, developed important contacts and has learned what works and what doesn't work.

The association has a long record of working with displaced populations: Assyro-Chaldean and Greek refugees in the 1920s, Palestinian refugees since 1948, displaced Lebanese villagers, and now Iraqis and Syrians.

"We have learned to listen; to proceed quickly but prudently; to plan, but to be flexible, as the fluidity of the theater can make your plans a fool's folly," said Michael La Civita, CNEWA's communications director.

In 2015, association dispersed more than $2 million in funding projects in Egypt, Iraq, Jordan, Lebanon, Palestine and Syria, according to a financial report it issued. In Ankawa, funds were used to create health clinics and to fund the work of women religious like the Dominican Sisters of St. Catherine of Siena and the Daughters of the Sacred Heart.

CNEWA organized a pastoral visit to Iraq in April for its board chair, New York Cardinal Timothy Dolan, and board member Bishop William Murphy of Rockville Centre, N.Y. This writer also joined the small delegation.

Catholic Relief Services has been actively involved in the region in a close partnership with Caritas Iraq, headquartered in Baghdad. Together, they have provided humanitarian assistance to approximately 124,000 people. CRS has 60 staff members in Iraq and works with more than 250 Caritas Iraq staffers and volunteers.

The CRS budget for fiscal year 2015 was approximately $10 million. For 2016, it will be approximately $12 million. Some three-fourths of the funding comes from public donors like the U.N. World Food Program, and the U.S., Dutch, German and Canadian governments. The balance comes from private donors, including Catholic family foundations and individuals.

For the past two years, CRS and Caritas Iraq have focused their efforts on providing emergency aid, such as food and clothing; housing; and education. The agencies have undertaken a windows-and-doors project to complete partially built and abandoned homes that are now being used by displaced Iraqis. A thousand homes have been improved.

In Baghdad, CRS is sharing an office with Caritas Iraq and will start programs in June serving displaced people from Anbar province around the Baghdad area.

NCR spoke by Skype with Kevin Hartigan, Catholic Relief Services' regional director for the Middle East, Europe and Central Asia, who was in Paris.

"I'm very concerned that many will view Iraq as solely a military and political problem, when in fact it's a serious humanitarian story," he said. "Our focus has been on children and education." When people are displaced, it is critical to enable children to continue their education, he said.

Tent-like structures have been erected that, upon entering, have the look and feel of a classroom with pictures on the wall and are child-friendly by design. Teachers and counselors work with the young students and are especially on the lookout for signs of trauma.

CRS tries to reach a subgroup of the displaced who are underserved and often found in smaller towns and villages. The organization has a significant presence in Dohuk, a northern Iraqi town near the Turkish border. A new office recently opened up in Kirkuk and it has an office in Erbil. Since Kirkuk remains very dangerous, CRS and Caritas Iraq staff commute to the office, but do not stay overnight. Other parts of Iraq are relatively safe.

"One of our goals is to strengthen Caritas Iraq and to provide high-level technical support in areas like education, financial oversight and management," said Hartigan.

The Brooklyn, N.Y.-based Aid to the Church in Need began sending funds in support of displaced Christians in 2011, when isolated attacks by ISIS started to emerge. Since 2014, both the U.S. branch and the European branch of the organization have sent a combined $16 million in aid to Iraq. The U.S. portion is approximately $3.5 million. Aid to the Church in Need does not accept U.S. government grants.

The organization does not have team of people on the ground in Iraq, but has a regional representative covering the area.

The charity connects its 32,000 donors to specific requests made by local bishops in Iraq. In the case of Erbil, working with Chaldean Archbishop Bashar Warda, Aid to the Church in Need has focused on food, housing, schools and health care. Its funds helped feed, house and educate some 13,000 families, and construct nine schools serving some 900 students ages 6-18.

Since the initial crisis is over, Aid to the Church in Need is currently serving some 10,600 families, as the others have left the area. CNEWA estimates that approximately 7,200 Iraqi families have left for Jordan and Lebanon and elsewhere.

"Our goal is to accompany the suffering in Iraq at the direction of the local bishop and connect our donors to the displaced Christians," said Ed Clancy, outreach director for Aid to the Church in Need. "We support Archbishop Warda's desire to build a peaceful future through the education of the young, to keep displaced families intact, and to allow bishops to be the voices of peace."

Since 2014, the New Haven, Conn.-based Knights of Columbus has supported relief efforts throughout the Middle East region, including in Syria, Jordan and Lebanon.

In Iraqi Kurdistan, the Knights of Columbus has funded projects such as medical clinics in Erbil and Dohuk; provided more than $800,000 to feed 13,500 displaced Iraqi families for a month; provided funding for long-term housing for the displaced; provided winter coats for children; supported Syriac priests displaced from Mosul; and supported catechesis programs.

"Over the past two years, the Knights of Columbus has focused on both immediate needs and the long-term sustainability of the Christian community in Iraq," said Andrew Walther, vice president for communications and strategic planning. "The sustainability of this community has been and continues to be a priority for us, and we will continue to support projects that contribute to the long-term prospects of Christians there and throughout the region."

The initial, intense scramble to create housing in the form of displacement camps, health clinics and schools has given way to longer-term planning and decision-making. As to the future, no one knows how things will play out or when the displaced Iraqi Christians can go home, if ever.

Aid organizations live with the tension of whether to fund the building of permanent structures like in Ankawa, as it would send the message to the displaced that they are not going home, while at the same time trying to determine what kind of facilities will meet the needs of the suffering.

The displacement camps are full and becoming overcrowded due to marriages and new births. Some displaced families are doubling up in already cramped containers that serve as homes. So new housing is needed.

Additional health care options are also needed. Addressing the psychological impact of these traumatized people remains urgent. And creating livelihoods or jobs for the displaced is critical.

"We do not have any predictive insight on the military and political future in Iraq," said Hartigan, who was heading to Iraq at the end of June. "We want to avoid a lost generation because displaced children often miss school. Even with all we and many others are doing in Iraq, it remains inadequate in comparison to the scope of the need."

[Tom Gallagher is a regular contributor to NCR on domestic and foreign affairs.]

A version of this story appeared in the July 1-14, 2016 print issue under the headline: Catholics rally to aid the displaced in Iraq.