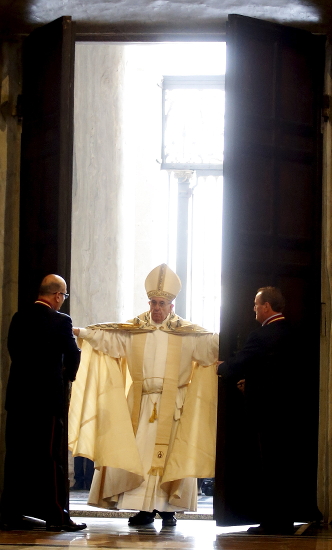 Pope Francis has launched his yearlong push for a global Catholic church of mercy and forgiveness, starting the Jubilee year focused on the subject by opening the holy door at St. Peter’s Basilica and calling for a church that always puts mercy before judgment.

In a solemn Mass attended by tens of thousands in a chilly St. Peter’s Square and marked by an unusually high security presence, the pontiff also praised the work of the Second Vatican Council and said the newly-opened Jubilee "compels us not to neglect the spirit which emerged" from that event.

"This Extraordinary Holy Year is itself a gift of grace," Francis said during the homily at the Mass. "To enter through the Holy Door means to rediscover the deepness of the mercy of the Father who welcomes all and goes out to meet everyone personally."

"How much wrong we do to God and his grace when we affirm that sins are punished by his judgment before putting first that they are forgiven by his mercy!" the pope exhorted.

"It is truly so," he said. "We have to put mercy before judgment, and in every case God’s judgment will always be in the light of his mercy."

"Let us abandon all fear and dread, for these do not befit men and women who are loved," said Francis. "Instead, let us live the joy of encounter with the grace that transforms all."

The pontiff was speaking in the Mass opening the Jubilee year of mercy, which will continue from Tuesday through Nov. 20, the day celebrated next year as the feast of Christ the King.

A Jubilee year is a special year called by the Catholic church to receive blessing and pardon from God and remission of sins.

While most Jubilees have been focused on calling pilgrims to Rome to receive such pardon, Francis has widely expanded his Jubilee, asking that dioceses throughout the world open their own holy door at a cathedral or other church to expand the practice globally.

A holy door is a door normally designated in special churches -- like the four papal basilicas in Rome -- to be opened only during Jubilee years as a sign of the possibility of re-entering into God’s grace.

Francis opened the holy door in St. Peter's Basilica towards the end of the Mass Tuesday. Standing in front of the door, located at the northeast corner of the Vatican basilica, the pontiff asked God to grant "a year of grace, a favorable time to love you and our brothers and sisters in the joy of the Gospel."

Calling Jesus "the shining face of your infinite mercy, safe refuge for us sinners, needing of forgiveness and peace" and saying that Christ is the door "through which we come to [God]," the pope pushed through the door open slowly with both hands while walking through.

Retired Pope Benedict XVI, looking a bit frail while grasping a cane to walk, was the second person to follow Francis through the door, and the two pontiffs embraced and spoke briefly both before and after the opening of the threshold.

Both Francis’ homily at the Mass and the ceremony itself also paid tribute to the Second Vatican Council, which officially closed its work on Dec. 8, 1965.

The Council, known colloquially as Vatican II, has been a hot point for conversation in Catholic circles over the past 40 years, with some praising its work to reform certain aspects of the church's teachings and others saying those reforms may have gone too far or have been misinterpreted.

The Eucharistic celebration Tuesday was opened with readings of excerpts from the Council’s four constitutions and its documents on ecumenism and religious liberty. In his homily, Francis said the Council documents "verify the great advance in faith" made at the event.

"In the first place, however, the Council was an encounter," said the pontiff. "A true encounter between the Church and the men and women of our time."

"An encounter marked by the force of the Spirit, who pushed the Church to emerge from the shoals which for many years had kept her closed in herself, to set out once again, with enthusiasm, on her missionary journey," he continued.

"It was the resumption of a journey of going to meet every person where they live: in their cities, in their homes, in their workplaces," he said.

"Wherever there is a person, the Church is called to reach out to them to bring the joy of the Gospel," said Francis. "After these decades, we again take up this missionary push with the same power and enthusiasm."

"The Jubilee challenges us to this openness, and compels us not to neglect the spirit which emerged from Vatican II, that of the Samaritan, as Blessed Paul VI reminded at the conclusion of the Council," he said. "May our passing through the Holy Door today commit us to making our own the mercy of the Good Samaritan."

Francis' opening of the holy door in St. Peter's Tuesday is just one of a number of signs and symbols the pope and the Vatican will undertake in coming days to stress the opening of the Jubilee year and the focus on the boundless nature of God's mercy.

The pontiff already made one special sign during his November visit to the Central African Republic, opening a holy door at the cathedral in the capital of Bangui a full eight days before the official opening of the Jubilee.

Francis will open the door of Rome’s Basilica of St. Mary Major, the fourth papal basilica, on Jan. 1.

In preparation for visitors coming to Rome to celebrate the Jubilee, the Vatican has opened a new office on the main road into St. Peter's Square to welcome pilgrims and to centralize services such as obtaining tickets to walk through the holy door at St. Peter's.

They have also placed dozens of new metal detectors under the iconic colonnades in the Square to streamline security access to the basilica. Hundreds of volunteers will be available each day of the year to assist pilgrims.

Security measures for Tuesday’s Mass were among the most stringent seen at the Vatican since at least 2014’s canonization of Sts. John Paul II and John XXIII, with a bag check at the far east end of the Roman road entering St. Peter’s Square forcing tens of thousands to face long queues to enter the event.

Uniformed military were also patrolling crowds as they lined to enter the Square, uniformed and plainclothes police officers were patrolling streets around the Vatican, and police boats were even sighted on the normally abandoned Tiber River.

Francis has also said he will be making a special sign of mercy one Friday of the month each month during the Jubilee. The first will come Dec. 18, when he is to open a door at a Caritas center in Rome that provides shelter and food for those in need.

The holy year will get a special push Feb. 10, Ash Wednesday next year, when the pontiff will commission some 800 priests from around the world to serve as "Missionaries of Mercy," giving them a special mandate to go among dioceses and forgive even canonical penalties normally reserved to the Holy See.

In a special Angelus prayer following the Mass Tuesday with pilgrims in St. Peter’s Square for the feast of the Immaculate Conception, Francis said the celebration of Mary’s birth becomes a celebration for all through a daily "yes" to let go of selfishness and to make the lives of our brothers and sisters in the world happier.

"Today’s feast of the Immaculate Conception has a specific message to communicate to us: It reminds us that in our life all is gift, all is mercy," said the pontiff. "The Holy Virgin … helps us to rediscover always more divine mercy as the distinctive characteristic of the Christian."

"It is the synthesis-word of the Gospel, mercy," he said. "It is the fundamental trait of the face of Christ: that face that we recognize in the diverse aspects of his existence: when he goes out to meet all, when he heals the sick, when he sits at table with sinners, and most of all when, nailed to the cross, he pardons; there we see the face of divine mercy."

The closing of the Mass Tuesday emphasized that while the Jubilee year is oriented towards evincing God's immeasurable mercy towards us, it also is meant as a forceful push to show Catholics around the world to be merciful to one another -- and to everyone else.

"Be merciful as your Father is merciful," a deacon intoned, ending the liturgy.