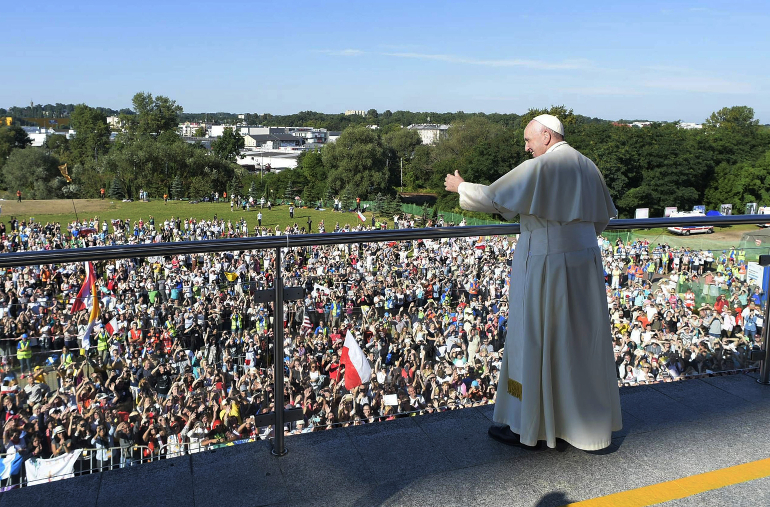 Pope Francis greets the crowd as he visits the Divine Mercy Shrine in Lagiewniki, a suburb of Krakow, Poland, July 30. (CNS photo/Paul Haring)

Pope Francis told Poland's Catholic clergy Saturday that the key challenge of the Gospel is that it remains unfinished -- that Jesus looks to us to "take concrete care" of his wounds by serving our brothers and sisters, "those close at hand and those far away, the sick and the migrant."

In a Mass with the country's bishops, priests and religious at a shrine dedicated to the memory of their hero-Pope John Paul II, the pontiff said the Gospel "still has many blank pages left."

"It remains an open book that we are called to write in the same style, by the works of mercy we practice," the pope continued, asking the clergy: "What are the pages of your books like? Are they blank?"

"By serving those who suffer we honor the flesh of Christ," Francis exhorted.

About 7,000 people attended the Mass at the shrine, which contains a series of colorful modern mosaics depicting biblical events and also houses many relics of John Paul II, including the bloodied white cassock he was wearing the day he was shot in St. Peter's Square at the Vatican in 1981.

The event was the only occasion during Francis' Wednesday-Sunday visit to Poland dedicated specifically to the country's clergy, and the pontiff took advantage of the opportunity to again outline his vision for the Catholic church.

Reflecting on the story in John's Gospel about how the apostles locked themselves in an upper room in fear following Jesus' death, the pope said Jesus' appearance to them was a reminder that he wants his followers not to be locked up but to be going out.

"Jesus sends," said Francis. "From the beginning, he wants his to be a church on the move, a church that goes out into the world. And he wants it to do this just as he did."

"He was not sent into the world by the father to wield power, but to take the form of a slave; he came not 'to be served, but to serve' and to bring the Good News," said the pope.

"In our lives as priests and consecrated persons, we can often be tempted to remain enclosed, out of fear or convenience, within ourselves and in our surroundings," said the pontiff.

"But Jesus directs us to a one-way street: that of going forth from ourselves," he continued. "It is a one-way trip, with no return ticket. It involves making an exodus from ourselves, losing our lives for his sake and setting out on the path of self-gift."

Before celebrating Mass at the John Paul II Shrine Saturday, Francis also visited the nearby Divine Mercy Sanctuary, dedicated to the devotion promoted by 20th-century saint and mystic Faustina Kowalska.

The pontiff entered the sanctuary through the church's special holy door for the continuing Jubilee year of mercy and prayed before the saint's tomb. He also heard confessions from eight people, speaking in Spanish, Italian and French.

Writing in the sanctuary's guestbook in Spanish, the pope quoted Jesus' exhortation in Matthew's Gospel: "I desire mercy, not sacrifice."

On Saturday afternoon, Francis' had a private lunch of traditional Polish food with 12 young people from around the world. At a small press conference following the lunch, one of the young women who took part described how the pope took a selfie with the group and took questions as they ate.

"It was like being with our father and we were just his children," she said.

Later Saturday Francis will attend a prayer vigil with pilgrims for World Youth Day, expected to attract crowds in the hundreds of thousands.