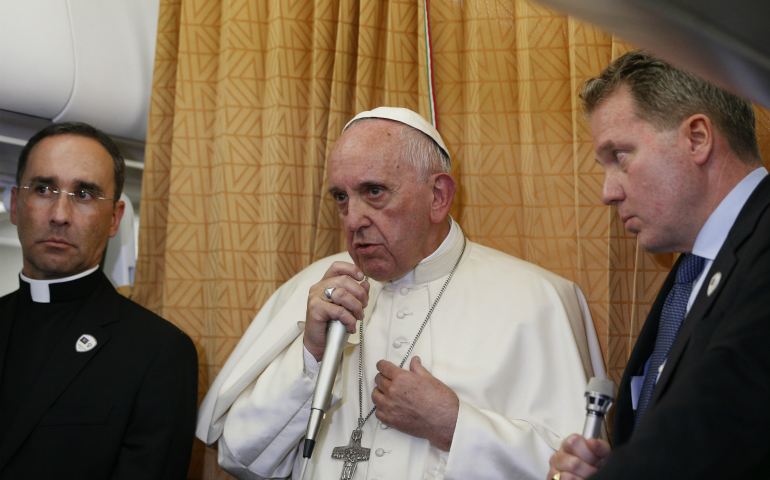 Pope Francis responds to a reporter's question about the U.S. presidential election aboard his flight from Baku, Azerbaijan, to Rome Oct. 2. At left is Father Mauricio Rueda Beltz, papal trip planner; at right is Greg Burke, the new Vatican spokesman. (CNS photo/Paul Haring)

Pope Francis has advised U.S. Catholics voting in November's presidential election to study the proposals of the candidates well, to pray about it, and then "choose in conscience."

In a lengthy press conference aboard the papal flight back to Rome Oct. 2 after a weekend visit to Georgia and Azerbaijan, the pope was asked what counsel he might give to Catholics who are unhappy with both Democratic candidate Hillary Clinton and Republican candidate Donald Trump.

"I never say a word about electoral campaigns," the pope replied. "The people are sovereign. I will only say: Study the proposals well, pray, and choose in conscience."

Francis was asked about the election campaign during a 50-minute conference in which he also spoke about how Catholics should treat transgendered people, revealed his travel plans for 2017, and gave hints about when he might create more cardinals for the Catholic church.

After specifically addressing the U.S. election, the pope continued to speak about selection of political candidates in a more general way outside the context of the presidential contest.

"When it happens that in a country, any country, there are two or three or four candidates that do not satisfy everyone, it means that the political life of that country maybe is too politicized," said the pontiff.

Regarding his upcoming trips abroad, Francis revealed that he is planning to visit Portugal, India, and Bangladesh in 2017. He also said he is hoping to visit Africa but is unsure about which country as "it depends on the political situations and wars there."

More from the trip: In Muslim Azerbaijan, Francis calls for interreligious unity against violence

The trip to Portugal, Francis said, would likely be brief and only to Fatima, celebrating the 100th anniversary of the famous apparition of Mary, May 13. The pontiff said the India and Bangladesh trip is "quasi-sure."

He also said he is still considering a trip to Colombia following the historic peace agreement between the government and FARC rebels there, but wanted to wait until everything was "locked-up" or "when everything is sure, sure, sure" for the success of the peace deal.

Francis said he did not have a firm date yet for when he would create new cardinals but "it could be the end of the year, or the beginning of the next."

"At the end of the year there is the problem of the end of the Holy Year, but you can resolve it," he said, referencing the Nov. 20 closing of the Jubilee year for mercy. "Or at the beginning of the next year."

The pope said his criteria for choosing cardinals is having some "from everywhere" so "you see in the College of Cardinals the universality of the church."

"The list is long but there are only 13 spots," he said, in an apparent reference to the current limit imposed by Pope Paul VI of having only 120 cardinals under the age of 80. "You have to think about having a balance."