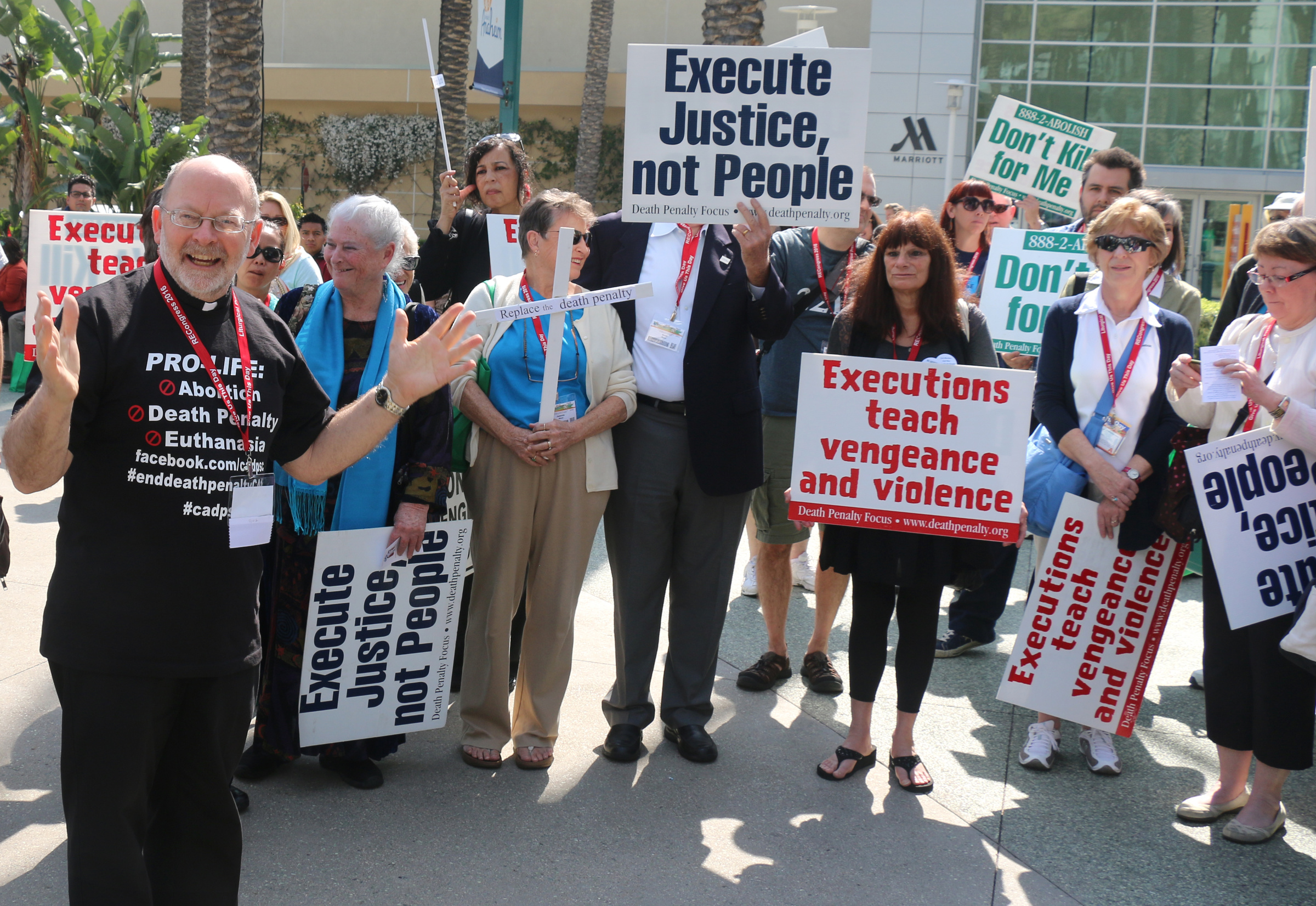 An unidentified priest leads a demonstration against the death penalty Feb. 27 as part of the Los Angeles Religious Education Congress in Anaheim, Calif. (CNS/The Tidings/J.D. Long-Garcia)

Christians around the world will pause in silence before crosses on Friday as part of a Holy Week journey toward Easter. The Roman Empire's instrument of execution is central to the story of Jesus' suffering, death and resurrection. For many people then and today, how a tree of despair and death is transformed into a throne of hope and new life defies any reason. Only through the eyes of faith do we see differently, reclaim the meaning of the Cross.

Good Friday observances will take place this year not only as an iconic spiritual date on the Christian calendar, but against a backdrop of growing political and religious attention to the persistence of state executions.

During a historic speech to Congress last fall, Pope Francis called for the abolition of capital punishment, highlighting how "every life is sacred, every human person is endowed with an inalienable dignity."

The pope reiterated his consistent appeal for abolition during a recent address in Rome that included a specific ask that Catholic public officials "make a courageous and exemplary gesture that no sentence is executed" during what Francis has called a Year of Mercy.

Catholic governors such as Terry McAuliffe of Virginia, a Democrat who opposes the death penalty, and Greg Abbott of Texas, a Republican who supports it and oversees one of the most flawed and prolific state execution machines in the world, stand at the nexus of contentious debates over crime and punishment, policy and morality.

The Virginia Senate has approved a bill that would bring back the electric chair if lethal injection drugs are not available. The House previously approved a version of the bill and will make minor changes before it goes to McAuliffe, who has not yet signaled his position.

Despite his opposition to the death penalty, McAuliffe does support bipartisan legislation that would cloak Virginia executions in what The Washington Post describes as "unprecedented secrecy." The bill is aimed to encourage manufacturers of lethal injection drugs to keep up supply in the state by shielding them from public scrutiny. At a time when some foreign companies have stopped selling these drugs because of a growing political backlash against the death penalty -- underscored by a series of high-profile botched executions --- the bill states that "all information relating to the execution process" would be exempt from the state's open-record laws.

"He is a Catholic, so there is a moral component to his position on the issue, but he's the governor, and he will enforce the law," a McAuliffe spokesman told the Post.

In Texas, Abbott, who last year was honored at the National Catholic Prayer Breakfast in Washington, seems unlikely to reflect on the pope's challenge. During his campaign for governor, Abbot was asked about whether his Catholic faith and pro-death penalty position raised any moral tensions. "Catholic doctrine is not against the death penalty, and so there is no conflict here," he breezily told the San Antonio Express-News editorial board. His answer conveniently distorts the essence of Catholic teaching.

Pope Francis is not going rogue when it comes to the Catholic position on executions, which he has described as "cruel, inhumane and degrading." More than 15 years ago, the U.S. Conference of Catholic Bishops issued "A Good Friday Appeal to End the Death Penalty." The Catechism of the Catholic Church, while not excluding the use of capital punishment if it is the only available recourse to protect society, quotes Pope John Paul II's encyclical "The Gospel of Life" in clearly stating that those situations are "very rare, if practically non-existent."

During a 1999 visit to the United States, John Paul preached that the "dignity of human life must never be taken away, even in the case of someone who has done great evil."

The United States is one of the few nations in the world that still regularly executes people. While a majority of Americans approve of the death penalty, that support is lower than it has been in two generations, according to a 2015 Pew Research Center survey.

The shift in public opinion is the result of a range of factors, including the common use of DNA evidence now that did not exist in previous decades.

Data from the Public Religion Research Institute shows that religious Americans support or oppose capital punishment at varying degrees, depending on their denomination.

White evangelicals and white mainline Protestants show the strongest support, while Hispanic and black Protestants are least likely to endorse.

The National Association of Evangelicals made headlines last year with a new resolution that for the first time in its history acknowledged that opposition to the death penalty is a legitimate posture rooted in Christian ethics.

"This is coming from very conservative evangelicals who are staunchly pro-life," Rodriguez told The Washington Post. "They don't see it as a liberal issue."

Christians who identity as "pro-life" because of their opposition to abortion should be at the forefront of ending the death penalty. As 400 Catholic and evangelical leaders wrote in a Holy Week statement last year: "All who reverence the sanctity of human life, created in the image of God, must never remain silent when firing squads, lethal injections, electric chairs and other instruments of death are viewed as morally unacceptable. ... In many ways, capital punishment is the rotten fruit of a culture that is sown with the seeds of poverty, inequality, racism and indifference to life."

The challenge ahead is clear.

More than four months after the Nebraska legislature voted to abolish the death penalty – a significant victory in a conservative state – a petition drive from supporters of capital punishment succeeded. A statewide referendum on the ballot in November will decide the future of the death penalty there.

The U.S. Supreme Court recently ruled that Florida's death penalty system is unconstitutional because the state, which has 400 inmates on death row, allows judges rather than juries to hand down a capital punishment verdict. Lawmakers responded with a new bill that would require at least 10 jurors to recommend a death sentence. The governor has signaled he will sign the bill in an effort to preserve the state's capital punishment system.

Meanwhile, an Alabama judge has also ruled that the state's death penalty is unconstitutional, based on the same Supreme Court ruling that struck down Florida's death penalty.

In the most recent vivid example of how morally grotesque it is for the state to be in the business of killing, a divided Ohio Supreme Court just last week found that a second execution attempt on a death row prisoner would not constitute double jeopardy or cruel and unusual punishment. In 2009, Ohio first tried to put Romell Broom to death but the execution was called off after repeated failed attempts to insert the IV.

During Holy Week, as we reflect on the suffering and death of Jesus at the hands of the state, the death penalty remains a profound injustice. How will pro-life Christians respond?

[John Gehring is Catholic program director at Faith in Public Life. He is author of The Francis Effect: A Radical Pope's Challenge to the American Catholic Church. You can follow him on Twitter @gehringdc.]