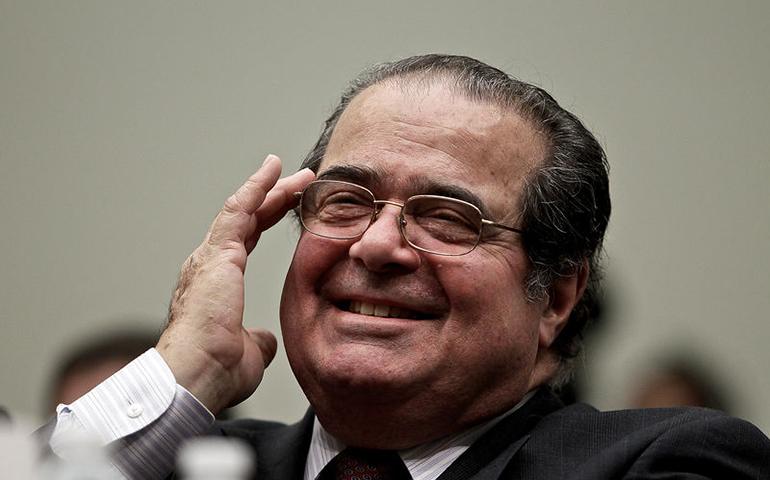 Justice Scalia’s dissent in the court’s 2013 gay marriage rulings set the stage for the overturning of same-sex marriage bans in dozens of states.

The newspaper quoted U.S. District Judge Fred Biery, who said he had been told of the death.

Scalia, 79, was a guest at the resort in West Texas, the Cibolo Creek Ranch, reportedly as part of a private group of about 40 people. When he didn’t appear for breakfast Saturday, someone went to his room to check on him and found a body.

Texas Gov. Greg Abbott issued a statement Saturday afternoon extending condolences to Scalia’s family. He called the justice "the solid rock who turned away so many attempts to depart from and distort the Constitution."

Over nearly three decades on the high court, Scalia’s sharp intellect and acerbic opinions made him a hero to conservatives and a target for liberals. Yet he also was a close friend to a leader of the court’s liberal wing, Justice Ruth Bader Ginsburg.

Texas Sen. Ted Cruz, a 2016 Republican presidential hopeful and himself a former clerk on the Supreme Court, posted a statement on Facebook mourning the death of "one of the greatest Justices in history." Cruz said, "A champion of our liberties and a stalwart defender of the Constitution, he will go down as one of the few Justices who single-handedly changed the course of legal history."

"My reaction is it’s very unfortunate," Biery told the newspaper. "It’s unfortunate with any death, and politically in the presidential cycle we’re in, my educated guess is nothing will happen until the next president is elected."

President Obama could nominate a candidate to fill the vacancy, but winning confirmation by the Republican-controlled Senate in an election year would be difficult. The opening undoubtedly will fuel at debate in the presidential campaign about the importance of choosing his successor on a closely divided court.

Scalia managed to steer the federal judiciary toward his twin theories of “originalism” and “textualism” — strictly reading the Constitution and federal statutes to mean what their authors intended, and nothing more. Yet he leaves with more disappoinments than achievements and a legacy written in acerbic dissents.

The first Italian-American to serve on the court when he was named by President Ronald Reagan in 1986, "Nino" Scalia established himself as a firm opponent of abortion, gay rights and racial preferences. He was the lone dissenter when the court opened the Virginia Military Institute to women and consistently opposed affirmative action policies at universities and workplaces. When the court struck down the key section of the federal Defense of Marriage Act in 2013, he angrily predicted that it would lead to same-sex marriage -- and in 2015, he was proved right.

On the winning side of the ledger, Scalia was best known for authoring the court’s 2008 ruling in District of Columbia v. Heller upholding the right of citizens to keep guns at home for self-defense. The 5-4 decision, he said, was "the most complete originalist opinion that I’ve ever written."

But Scalia’s sharp-elbows brand of conservatism more often showed up in testily worded dissents and even what The New York Times labeled "furious concurrences," in which he agreed with the end result but ranted about the reasoning.

"Dissents are where you can really say what you believe and say it with the force you think it deserves," he said. And if they prove correct years later, he went on, it "makes you feel good."

That was the case in Morrison v. Olson, in which the court upheld Congress’ establishment of an independent counsel within the executive branch but beyond the president’s control. Scalia, as the lone dissenter in just his second term, said it infringed on presidential power.

“Frequently an issue of this sort will come before the court clad, so to speak, in sheep’s clothing,” he wrote of the balance-of-powers issue. “But this wolf comes as a wolf.”

In time, many conservatives and liberals came to distrust the power given to independent counsels, including Kenneth Starr, whose four-year investigation of President Clinton culminated in his impeachment. Congress let the law expire in 1999.

“It turns out that everything that Justice Scalia says in that opinion … is true,” his liberal colleague, Justice Elena Kagan, said recently.

Scalia also dissented vehemently from a 2012 ruling in an Arizona case that restricted the rights of states to regulate immigration. “You’re not a sovereign state if you can’t control your borders,” he groused.

No retreat, no surrender

He opposed the president and favored Congress in the more recent test of President Obama’s recess appointments power. While agreeing with the court’s majority that Obama exceeded his authority by going around the Senate to name members to the National Labor Relations Board, Scalia argued that such power should be limited far more than the court allowed.

“The majority practically bends over backward to ensure that recess appointments will remain a powerful weapon in the president’s arsenal,” he wrote. “That is unfortunate, because the recess appointment power is an anachronism.”

Never one to compromise his principles, Scalia spent most of his career on the court watching helplessly as its moderate members — Justices Sandra Day O’Connor and, later, Anthony Kennedy — cut the deals that led to majority opinions on issues such as abortion and gay rights.

His objections, he said recently, were not based on policy views but on “who decides” — and his answer almost invariably was the Constitution, the Congress or the president, not unelected judges with lifetime appointments like himself.

“Don’t paint me as anti-gay or anti-abortion or anything else,” he said. “We are a democracy. Majority rules.”

Despite his sometimes petulant personality, which he used on occasion to berate unprepared litigators standing alone at the lectern, Scalia was popular with his colleagues. He maintained close friendships with liberals such as Kagan and Justice Ruth Bader Ginsburg, with whom he bonded in the 1980s when they served together on a federal appeals court.

Ginsburg recently recalled listening to Scalia deliver a speech to the American Bar Association. She disagreed with the thesis, she said, but “thought he said it in an absolutely captivating way.”

Kagan, whom Scalia taught to hunt for ducks, deer and other game, called him “funny and charming and super-intelligent and witty.”

“If you can’t disagree on the law without taking it personally,” Scalia was fond of saying, “find another day job.”

A stickler for language

Scalia’s entire career on the high court was spent alongside two chief justices — William Rehnquist, a nominee of President Richard Nixon who became chief when Scalia joined the court in 1987, and John Roberts, who took over upon Rehnquist’s death in 2005.

Scalia harbored faint hopes of getting the top job then but acknowledged that, at 69, he was too old to give President George W. Bush a chief justice who might serve for several decades. Roberts, at 50, fit the bill.

Instead, Scalia’s claim to fame remained his reliance on the plain language of the Constitution and congressional statutes to guide his decision-making. The founding documents, he said, should not be subject to “whimsical change” by five judges.

“The Constitution means what the people felt that it meant when they ratified it,” he said. “Only in law do we say that the original meaning doesn’t matter.”

While he faced difficulty convincing liberal members of the court to follow his lead on the Constitution, he had more luck when it came to statutory interpretation. “He has won that battle,” Kagan said.

On the bench, Scalia was one of the court’s most active and incisive questioners. Virtually every year, he led all justices in quips that elicited laughter in the courtroom, according to careful tabulations by Boston University law professor Jay Wexler.

Along with Ginsburg and Justice Sonia Sotomayor, the high court’s first Hispanic member, Scalia also was a hot ticket on the speaking circuit. He was the inspiration for several theatrical endeavors, including a play, The Originalist, which ran for three months to rave reviews in Washington, D.C., and a comic opera, Scalia/Ginsburg.

While the Heller decision on the right to bear arms was perhaps Scalia’s most famous, he later admitted that the right is not unlimited. Many states impose restrictions on firearms outside the home, such as requiring a demonstrated need to carry a gun, whether concealed or in plain sight. Most lower courts have upheld those restrictions.

“There are doubtless limits – but what they are, we will see,” he said. Still, he waxed sentimental about the days when, as a student, he could carry a .22-caliber rifle on the New York City subways.

At times hard to categorize, Scalia joked that he “should be the pin-up for the criminal defense bar” because of his oft-stated defense of the Fourth Amendment’s prohibition on unreasonable searches and seizures and his belief that defendants have the right to confront their accusers in court.

Inside the marble-columned courtroom, Scalia led the way toward more intense interaction between the justices and lawyers. Only his ideological soul mate, Justice Clarence Thomas, refuses to participate in the rapid-fire questioning.

“It’s a very noisy court, not just me,” Scalia said. Another time, he acknowledged that “I often ask a question just for the hell of it.”

“I really do enjoy oral argument,” he said. “The intellectual thrust and parry — it’s almost like an English play.”

Yet he despised displays of overt partisanship, such as those at the president’s annual State of the Union addresses. Scalia boycotted the event for many years, arguing that for the justices to sit quietly in the front row gives “dignity to a childish spectacle.”

He was never a fan of the media, complaining that most news reports of the court’s work focused only on the result, rather than the underlying reasoning. He imposed strict limits on press access at his public appearances and remained a firm opponent of letting cameras into court.

"It will be 'man bites dog,'" he said of the imagined spectacle. "Why should I participate in the mis-education of the American people?"

A proud and productive life

Antonin Gregory Scalia was born March 11, 1936, in Trenton, N.J., the only child of a Sicilian immigrant father and second-generation Italian mother. His family moved to the borough of Queens in New York City during his childhood, and he established himself as a devout Catholic and a quick study in school.

After graduating from Georgetown University, Scalia said, "I had no idea what I wanted to do." He chose law school and "just loved it … everything about it is what I liked to do."

After Democrat Jimmy Carter’s election in 1976, Scalia returned to academia at the University of Chicago Law School, where he became one of the first faculty advisers to the fledgling Federalist Society, now the institutional bulwark of conservative legal doctrine.

Reagan’s election gave him a shot to become U.S. solicitor general, whose job it is to represent the federal government before the Supreme Court. He lost out but in 1982 was named to the U.S. Court of Appeals for the District of Columbia Circuit, a well-worn stepping-stone to the Supreme Court. Four years later, he won unanimous Senate confirmation.

Along the way, he and his wife, Maureen, had nine children who in turn, at last count, produced 36 grandchildren. He frequently credited his wife for raising the family.

"I take care of the Constitution. She takes care of everything else," he said. "That’s the deal."