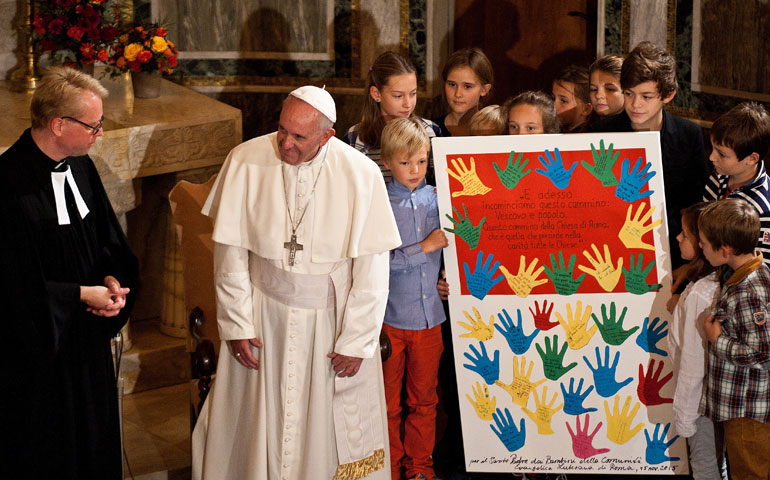 Pope Francis receives a gift from children during a visit to Christuskirche, a parish of the German Evangelical Lutheran church, in Rome on Nov. 15, 2015. (CNS/Catholic Press/ Massimiliano Migliorato)

As we approach the year of events leading up to the 500th anniversary of the Protestant Reformation on Oct. 31, 2017, a resurfacing question will be: Do we celebrate? Repent? Commemorate? Perhaps all three?

This is the first time the centenary observance of the Reformation will occur in an ecumenical era. Since the Joint Declaration of the Doctrine of Justification by the Vatican and the Lutheran World Federation in 1999, we've reached a new stage. We've made more progress in the last 50 years toward healing the wounds of our divisions than we have in the last five centuries.

Top Lutheran theologians participated as observers at the Second Vatican Council (1962-65). The international dialogue between the Vatican Secretariat for Ecumenism and the Lutheran World Federation started in 1967. After five sessions, they came out with the Malta Report in 1972 in which it was clear they decided to take on in the ensuing years a whole range of issues: Scripture and tradition; admission to the Eucharist; justification by faith; church law; ordination.

At a weeklong conference on "Fifty Years of Lutheran-Catholic Dialogue" last July at the Lutheran Institute for Ecumenical Research in Strasbourg, France, Dominican Fr. Hervé Legrand, a participant in the dialogue, gave an overview of the dialogue commission's work.

Discussion on Eucharist and ministry led to a new document in 1978 on "The Lord's Supper." Catholics and Lutherans agreed: Celebration of the Eucharist doesn't "repeat" the sacrifice of the cross or add to its salvific value. In the document, giving Communion under both kinds and preaching at every Mass was asked of Catholics, while a weekly celebration was asked of Lutherans. There is extensive agreement on the real presence under the signs of bread and wine.

As Lutherans only have two sacraments -- baptism and Eucharist -- they do not profess the sacramentality of ordination. For them, it is more of a collegial reality, whereas for Catholics it has an indelible character, that is, it marks one for life and cannot just be given up or repeated. There was a convergence of understanding on this, but a lack of accord on who can be ordained.

On the question of the ordination of bishops, for Catholics, if one becomes a bishop, one enters the college of the apostles. This historical link made sense to the Lutheran representatives for universal unity in apostolic teaching.

The Malta Report ended with the recommendation, based on growing theological agreement, that occasional sharing in the Eucharist should be allowed. "Not enough attention and action has been given to this recommendation," said Legrand.

"Canon law remains a huge obstacle in the ecumenical movement," Legrand observed, "and is tying the hands of Pope Francis as well."

He reflected that Vatican II was too short, inasmuch as it was primarily a theological council. There wasn't enough time to make the called-for adaptations in canon law in which, for example, there is no place for synods.

"The law is not fruitful for ecumenical dialogue," said Legrand. "Primacy is never to be thought about without collegiality."

Cardinal Johannes Willebrands, president of the Pontifical Council for Promoting Christian Unity from 1969 to 1989, noted that Vatican II accepted many of Luther's demands. Thanks to Luther, he said, many good ideas have been introduced into the Roman Catholic church, such as the use of the vernacular in liturgy; offering of both species in holy Communion; need for constant reform; priesthood of all believers; and more attention to Scripture and preaching. What we have in common is more important than what divides us.

Our task now, said Legrand, is to outline a path toward unity. The way forward is to drop the condemnations of the past. To recognize legitimate diversity. To collaborate in ministry. To reach a common understanding of episcopacy, the college of bishops, apostolic succession, and the office of Peter.

A version of this story appeared in the Oct 21-Nov 3, 2016 print issue under the headline: Lutherans and Catholics chart path to unity.