In England and Wales, 16,500 weigh in on Vatican synod survey 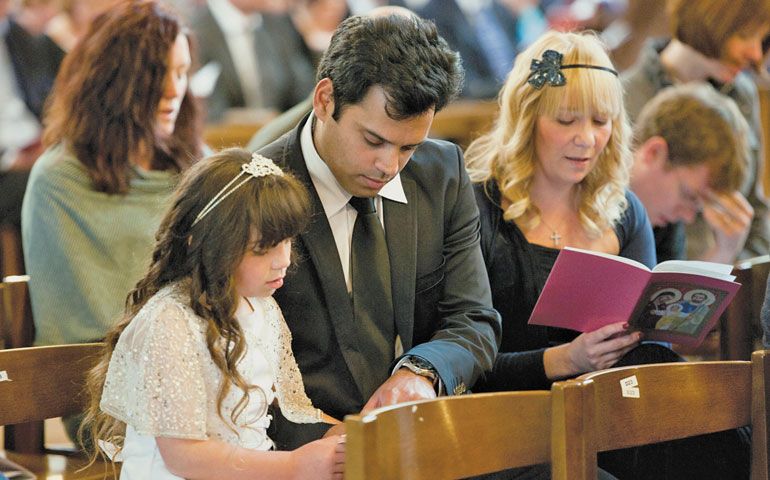 People attend a Mass of thanksgiving for marriage at Westminster Cathedral in London May 18, 2013. (CNS/Bishops' Conference of England and Wales/Marcin Mazur)
This article appears in the Synod on the Family feature series. View the full series.

London — This past Valentine's Day, a group of friars who run a busy parish in West London discussed over lunch how young Catholics seem to struggle to find husbands or wives who share their faith.

The Augustinians decided they could play Cupid and came up with the idea to offer "speed-dating" sessions in their parish where young men and women meet in quick-fire dates of just a few minutes each.

The friars' concern has been shared by many in the church in England and Wales, given the decline in the number of Catholic marriages in recent years. The number of Catholic couples entering marriage fell by almost 20 percent from 12,056 in 2001 to 9,763 in 2011, according to figures compiled by the Pastoral Research Centre Trust.

So when the Vatican announced its survey -- or "questionnaire" as church officials here have recently been stressing -- ahead of the Synod of Bishops on family life later this year, the bishops of England and Wales seized the initiative and were the first in the world to put it online.

It was a bold move that, judging by the level of response, paid off. In total, 16,500 responded to the survey, including many lapsed Catholics. Eighty percent of those who filled out the questions concerning Communion for the divorced and remarried, same-sex marriage, and contraception were laypeople and 69 percent were married.

But unlike other European bishops, such as the German and Swiss, the English and Welsh hierarchy decided not to publish the results of the consultation.

The move was greeted with frustration verging on anger. An editorial in the London-based Catholic weekly The Tablet argued: "The failure to inform English and Welsh Catholics how their views have been summarized comes close to a breach of faith." One lay Catholic wrote to Cardinal Vincent Nichols of Westminster to ask: "Can you explain why we are not being given access to the results which is, in fact, our data?" The reason given is that they are following a request from the Holy See to keep the survey results private.

But what did Catholics in England and Wales say in the survey?

Anecdotal evidence suggests they are at odds with church teaching against cohabitation before marriage and the ban on contraception in much the same way that Catholics in Germany and Switzerland appear to be.

Mark Molden, the chief executive of Marriage Care, a Catholic charity that provides marriage preparation courses for some 3,000 couples a year, says that the average couple attending a course will have lived together for five years. Marriage Care, which submitted answers to the synod survey, noted that "most couples have made their decisions on the form of contraception they use."

Nichols did not release synod survey findings for his archdiocese, but he had his director of marriage and family life, Edmund Adamus, respond to or analyze the data in an article in the archdiocesan newspaper. The article drew criticism because instead of exploring why Catholics aren't following some church teachings, Adamus concluded that Catholics are confused about conscience when it comes to issues such as fertility and responsible parenthood and that they need to be better informed of Church teaching on marriage.

Adamus said the young must be encouraged to aspire to marriage as "a loving and stable union open to life."

Molden, meanwhile, says that his experience has shown him that people are inspired by the church's vision of marriage with the majority of couples seeing it as a sacramental and lifelong commitment.

[Christopher Lamb is assistant editor for home news at The Tablet in London.]

Accountability | In England and Wales, 16,500 weigh in on Vatican synod survey

NCR Podcast: What happened at the US bishops' fall meeting?

Faithful Fools chip away at the boundaries

'Youth of the church are here to help back you up'

Belgian bishop insists he is not a pedophile