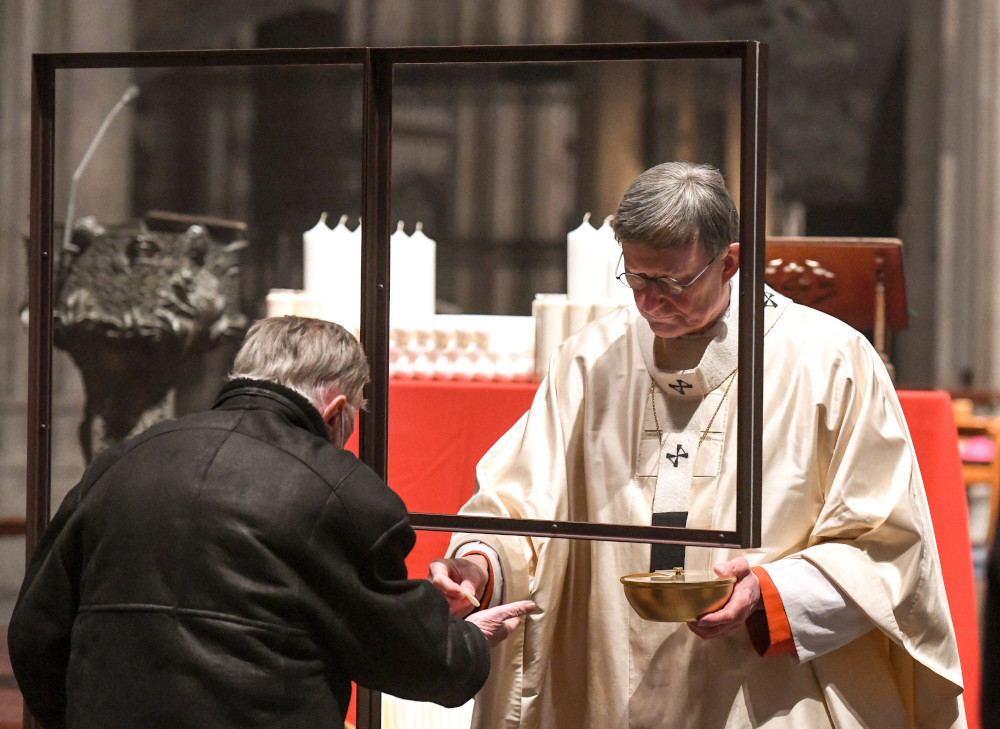 German Cardinal Rainer Maria Woelki of Cologne distributes Communion through a protective barrier as he celebrates Mass at the cathedral in Cologne Feb. 2, 2021, during the COVID-19 pandemic. The cardinal faces deep criticism for his handling of abuse allegations in the archdiocese. (CNS photo/KNA/Harald Oppitz)

The Archdiocese of Cologne, which has the largest membership in the German-speaking world with almost 2 million Catholics, is sliding into a crisis of confidence.

The German Catholic news agency KNA reports that parish councils, priests and most recently the diocesan council have criticized Cardinal Rainer Maria Woelki for his handling of an abuse investigation, and the ferocity of their criticism is unusual.

Tim Kurzbach, archdiocesan council chairman, said in late January that Woelki had "failed as a moral authority" and was not confronting the problem. In protest, the council, made up of elected representatives of Catholic laypeople, said it was suspending its cooperation on diocesan reforms.

It was a rare step, and it was taken despite the cardinal's pledge to conduct a rigorous investigation.

At the end of 2018, the cardinal had commissioned a Munich law firm to examine the archdiocesan leadership's handling of cases of sexual violence. After additional law professors were asked for advice on the completed report and declared in October that it contained "methodological deficiencies," the archbishop canceled his cooperation with the law firm and commissioned a new report from Cologne criminal lawyer Björn Gercke. He is to present his findings March 18, and Woelki seems intent on riding out the criticism until then.

Meanwhile, increasing numbers are quitting the church in Cologne, and protests are mounting, KNA reported. The 10 representatives of the diocesan council in the archbishop's highest advisory body, the archdiocesan pastoral council — which includes religious as well as lay members — are no longer prepared to discuss the planned merger of parishes and are blocking a process that already has ample potential for conflict. Woelki wants to merge the 500 or so mostly smaller parishes into 50-60 large parishes. Parishioners have been critical of the planned structural reform for a long time, and now the indignation is being compounded by the handling of abuse cases.

The lay archdiocesan council has demanded the publication of the Munich report. In addition, its representatives want former and current members of the diocesan leadership to come clean about their breaches of duty in dealing with abuse cases, independently of any expert reports.

Cologne's city dean, Msgr. Robert Kleine, also supports that demand. Those who know that their actions are currently being investigated should admit their mistakes now, he said. At the very least, consequences must be taken immediately after the presentation of the report, Msgr. Kleine added.

"In any case, we cannot wait until after March 18 for this to be discussed in whatever circles," he said.

Two groups of Catholic priests have written angry letters to Woelki, KNA reported. In one, 34 priests complained that more and more believers were distancing themselves from the church because of the "failure to come to terms with the abuse." Catholics' loyalty to the church had been severely strained, the letter warned. Another 20 clergymen expressed similar sentiments in a separate letter, and several bishops from other dioceses also voiced criticism. In December, Bishop Georg Bätzing, president of the German bishops' conference, said, "It's not good that this has now led to a real disaster and is rubbing off on all of us."

In January, a Catholic women's protest movement appealed to Pope Francis and asked for an apostolic visitor "so that you can get an idea of the situation and we can seek new ways together."

The criticism has been reinforced by a number of incidents that have put the diocesan leadership in a bad light. After one priest called on Woelki to resign, the archdiocese threatened him with legal consequences, then took back the threat.

There also was criticism of the archdiocese's decision to block the homepage of the Catholic Chaplaincy for Students in Cologne because members of its staff did not remove a position paper containing strong criticism of church sexual morality.

Then, Cologne Auxiliary Bishop Ansgar Puff came under fire for his ill-chosen use of a quote by Nazi propaganda chief Joseph Goebbels to not only criticize false claims made by former U.S. President Donald Trump but also the repeated reports about the "supposed misconduct of bishops" — a remark for which he later apologized.

Puff is the only member of the archdiocesan leadership still answering journalists' questions. Speaking to regional public broadcaster WDR, he ruled out that the cardinal would resign. However, on the diocese's own media site, domradio.de, he voiced understanding for criticism and regretted mistakes in communication or "perhaps also in the commissioning of the expert report."

At the same time, Puff said he was convinced that Woelki was committed to investigating past abuse. He urged the public to wait for the new report. He said he had been questioned by both law firms about his time as head of personnel from May 2012 to August 2013 — and that Gercke, the newly commissioned legal expert, had been much more precise in his follow-up questions.

The diocesan leadership was focusing on holding talks among small circles of people in the run-up to the publication of the report, Puff said.

"I also know that the cardinal is going out and visiting priests," said Puff. "We should talk to each other a lot without wanting somehow put the other side down."