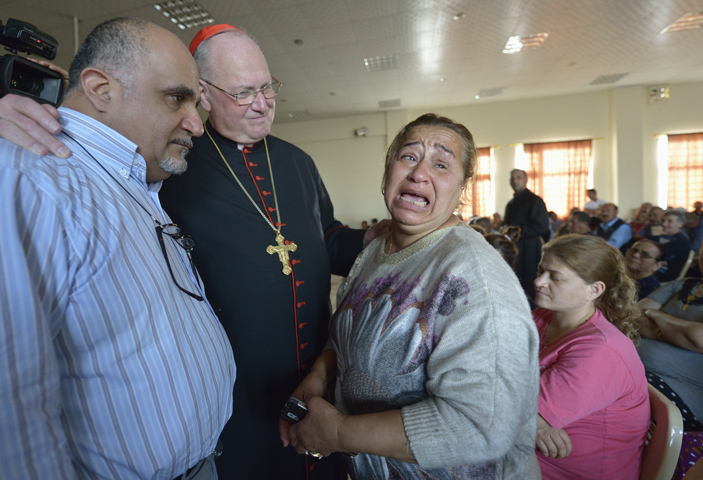 Cardinal Timothy Dolan listens to Amal Mare during a visit to a camp for internally displaced families in Ankawa, Iraq, April 9. (CNS/Paul Jeffrey)

Editor's Note: This past week Cardinal Timothy Dolan, Archbishop of New York and chair of Catholic Near East Welfare Association, traveled to Iraqi Kurdistan on a pastoral visit to that region's displaced Christian families. NCR was a part of this small delegation. In addition to Cardinal Dolan, Bishop William Murphy of the diocese of Rockville Centre, N.Y., and Msgr. Kevin Sullivan, head of Catholic Charities of the Archdiocese of New York, were a part of the delegation.

The delegation visited multiple health clinics, displacement camps for Iraqi Christians and Yazidis, and met many religious sisters and priests who are on the front lines of caring for the displaced, as well as bishops of different religious traditions.

Dolan and Murphy sat down with NCR while still in Erbil, Iraq, for a brief reflection on the visit. NCR’s reporting on the trip will continue over the next several days.

NCR: In addition to prayer, what practical assistance can dioceses, parishes, Catholic organizations and individuals do to assist Christians persecuted and suffering in Iraq and the Middle East?

Dolan: One of the reasons we come here is to get the word out and let people know what’s happening. First of all, I know you didn’t intend it this way, Tom, but we can never diminish the value of prayer. And that has to be first and foremost. If I've ever seen that vindicated, it’s in the vivid faith of the people here. I mean prayer, worship, liturgy, faith means the world to them. And as one lady told us yesterday, "Where else are we going to go, but to our faith?" We can never diminish prayer. I know you didn’t intend it that way.

What can we do? I think we need to get practical. Let’s start supporting vigorously organizations like the Catholic Near East Welfare Association. Let’s start reminding our people of Aid to the Church in Need. You and I and Bishop Murphy and Msgr. Sullivan have just spent almost five days going to places that are really 'loves and fishes' operations, creating miracles with the little bit of money that they have. We literally stand breathless and in admiration for the work they are doing. Think of what they can do with ten times more resources.

You saw today what the people say to us when we saw the magnificent doctors and pharmacists: "Sometimes we don’t have the medicine." So let’s not apologize for letting our people in the United States know that they need to be extraordinarily generous, as is their character, to organizations like CNEWA and like Aid to the Church in Need. We've seen the work they do on the ground firsthand. I don’t want to leave out other Christian organizations. I don’t want to leave out the Knights of Malta. This is just phenomenal and you see the gratitude of people for it. They point to the signs [hanging at the funded enterprises] and say, "Thank you, thank you, thank you." But they also say, "If you are able to do more, please do so." So that’s one practical thing we can do.

Number two: Let’s advocate. Do you remember when [President] Ronald Reagan for the first time met with [Soviet Union President] Mikhail Gorbachev? He told the American people that he had a list in his pocket of the names of people who were in prison for their religious beliefs in the Soviet Union. He intended to ask Mikhail Gorbachev about each of them. And it worked.

We hold in high regard the advocacy of our Jewish neighbors, especially in New York. They are first to tell us, people like Bishop Murphy and me, "What’s taking you so long? Why are you afraid to advocate with the government on behalf of your people?" We need to do that.

I’ve been moved with the fact that I haven’t detected any anger against the United States among these wonderful people [the internally displaced Christian Iraqis]. In fact, I detect a love for America, almost a trust that America could do something for them. And we can’t let them down. We’ve got to do it. I’m not just talking about humanitarian aid. I’m talking about the plea from them [displaced Iraqi Christians] that we heard over and over again: "We just want to go home. We just want to go home." So let’s advocate.

Bishop Murphy and I intend when we get home to meet with some of our Congressional leaders, to let the Secretary of State, to let the White House know what we have seen, what we have heard, good and bad. We cannot let up on the plight of these people. We're just not talking about military stuff, of which there is an over dependence on military intervention -- which is part of the problem anyway -- we're talking about humanitarian [aid], we’re talking about diplomatic, our government advocating with our allies to do something stronger for these people. Anything to add Bishop Murphy?

Murphy: Just one thing. When you think about it, those of us involved in the "stop the genocide of Christians," that was a comparatively short-life effort and all of a sudden without any fanfare, [U.S. Secretary of State] Kerry agrees. Now we’ve got the word ["genocide"], now we need the action. That’s the next question. If this is the case -- that this is genocide [the killing of Christians in the Middle East], then how does that insert itself into some kind of policy?

There is a significant population in the U.S. that is anti-refugee, anti-immigrant and anti-Muslim. How do you change the hearts and minds about what is happening to both Christians and Muslims here in the Middle East?

That having been said, yes, there are going to be some who for basic survival have to move on. And if the United States of America is not loyal to its birthright as giving a warm embrace to the world, then we’ve lost something essential to the American character. Bishops in the United States say over and over again that safe and secure borders is a right and a duty that our government has to provide, but that doesn’t mean that the door is closed and locked. It means there is a careful, solicitous approach and darn it, the ones who needed it the most [to come to the United States], should be given the first chance.

When you look at the U.S. bishops conference structure, you’ve got a single committee -- the Committee on International Peace and Justice. When you experience the desperate plight of the Christians in Iraq, for example, it strikes me that this single committee is not robust enough to answer the call of what millions of people are experiencing in the Middle East. Should we as a U.S. church be thinking about a new structure or platform to address this urgent need?

Dolan: Bill [Bishop Murphy], you’re on that committee so I defer to you to answer this question.

Murphy: It’s true that we [the committee] probably cover too much. And we have to do priorities better than we do them now. I don’t know what the alternative might be, except for the fact that if we have some people who want to organize as Catholic lay leaders, they should be able to have their voices heard. They should be able to stand up and do what we bishops can’t do.

In the U.S. we have seen for the past 2-3 years the religious-persecution fight over contraception. But the Christian people here in Iraq and in the Middle East are dodging bullets and beheadings and it strikes me that there’s a cognitive dissonance between these two senses of religious persecution. How do you integrate these different realities?

Dolan: You’re right. You’re right. We bishops know that. If you go back to my final talk to the U.S. bishops conference when I had the honor to serve as president, while I would consider our advocacy for religious freedom -- the most cherished liberty -- to be one of our strong points, our concerns about religious liberty are insignificant to what we see here. You’re talking about survival. You’re talking about actual life and death matters.

Now they will be the first to tell us, in fact, the priest we saw today at the clinic, I said, "Are we going to see you at Mass [later today]?" He said, "No. I’m going to a conference on religious liberty." Because they too are concerned [about religious liberty]. You might, Tom, say that there is an ad extra religious liberty and that’s what we’re seeing here for that. There’s ad intra religious liberty. They [e.g., Iraqi Christians] are not only being attacked from the outside by vicious fanatic forces, but there’s also a need for them to be culturally [free] and with the government to protect their right to freely exercise religion in the country in which they live and serve. Now it’s that second one that we bishops are most attentive to. Our attentiveness to that issue of which we are very proud and should remain as vigorous as ever, cannot dull us to the much more urgent, towering concerns of religious freedom elsewhere.

[Tom Gallagher is a regular contributor to NCR on domestic and foreign affairs and is the lead writer for the newspaper's Mission Management column.]