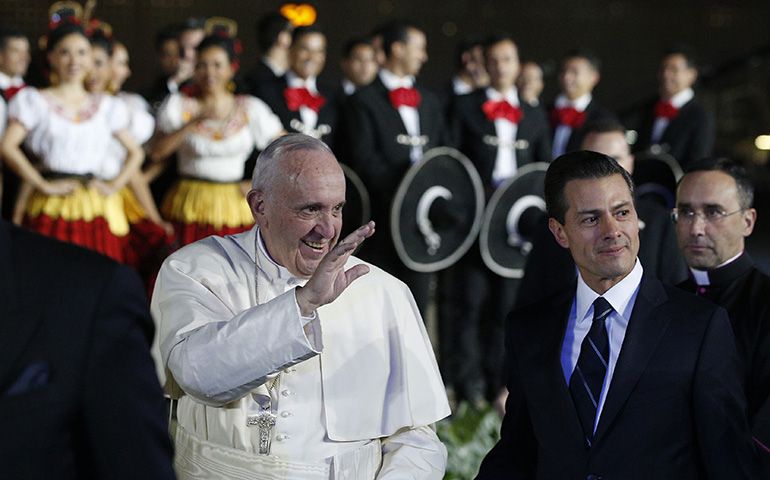 Mexico City — Pope Francis has given one of his most direct and blunt outlines for what he expects from Catholic bishops, forcefully telling the Mexican episcopate what they should and should not be doing -- warning them against words that are "empty figures of speech" and inaction that "squanders" their country's history.

In a detailed 41-minute address to the country's bishops Saturday, the pontiff also offered a comprehensive vision for the future of Mexico. Plotting a path away from recent drug violence and political corruption, the pope called on the bishops to help build a society of solidarity and integration of cultures.

At times giving the bishops specific directions on how to respond to their country's challenges, Francis infused his address with rich references to the country's cultural history and to the struggles Catholics faced under governments of the 19th and 20th centuries.

"Be bishops who have a pure vision, a transparent soul, and a joyful face," the pontiff directed the prelates at one point. "Do not fear transparency. The Church does not need darkness to carry out her work."

"Be vigilant so that your vision will not be darkened by the gloomy mist of worldliness," he exhorted. "Do not allow yourselves to be corrupted by trivial materialism or by the seductive illusion of underhanded agreements.

"Do not place your faith in the 'chariots and horses' of today’s Pharaohs, for our strength is in 'the pillar of fire' which divides the sea in two, without much fanfare," he continued.

When the Mexican people look at their bishops, Francis said later, they "have the right to witness the signs of those 'who have seen the Lord,' of those who have been with God."

"This is essential," said the pontiff. "Do not lose time or energy in secondary things, in gossip or intrigue, in conceited schemes of careerism, in empty plans for superiority, in unproductive groups that seek benefits or common interests. Do not allow yourselves to be dragged into gossip and slander."

"If our vision does not witness to having seen Jesus, then the words with which we recall him will be rhetorical and empty figures of speech," said the pope.

"They may perhaps express the nostalgia of those who cannot forget the Lord, but who have become, at any rate, mere babbling orphans beside a tomb," he continued later. "Finally, they may be words that are incapable of preventing this world of ours from being abandoned and reduced to its own desperate power."

Addressing the continuing violence of the Mexican drug trade, estimated to have killed tens of thousands in the past decade, Francis was the most blunt.

"I urge you not to underestimate the moral and antisocial challenge which the drug trade represents for Mexican society as a whole, as well as for the church," he told the bishops.

"The magnitude of this phenomenon, the complexity of its causes, its immensity and its scope -- which devours like a spreading cancer -- and the gravity of the violence which divides with its distorted expressions, do not allow us as pastors of the church to hide behind anodyne denunciations," the pope forcefully said.

"Rather they demand of us a prophetic courage as well as a reliable and qualified pastoral plan, so that we can gradually help build that fragile network of human relationships without which all of us would be defeated from the outset in the face of such an insidious threat," he told the prelates.

The pontiff then called on the bishops to support families, saying it is only through the help of families that people will "finally escape the raging waters that drown so many, either victims of the drug trade or those who stand before God with their hands drenched in blood, though with pockets filled with sordid money and their consciences deadened."

Francis was speaking Saturday to Mexico's 176 bishops in a meeting at Mexico City's Cathedral of the Assumption of the Most Blessed Virgin Mary. It was the second of three public events on the pontiff's first full day in Mexico.

Earlier on Saturday, Francis met with Mexican President Enrique Peña Nieto and the country's political leaders at the National Palace. Later in the day he will celebrate Mass at the Basilica of Our Lady of Guadalupe, which houses the famous image of Mary.

The pope is visiting Mexico through next Wednesday. Although he is staying each night in Mexico City, he will be traveling in coming days to the Mexico's southern and northern borders, as well as to Morelia, one of the cities most affected by the drug violence.

Speaking in formal remarks to Peña Nieto Saturday, Francis called Mexico a "great country" and said how excited he was to continue on with his travels through the week. But the pontiff also seemed to obliquely criticize the unequal distribution of wealth and power in the country.

"Experience teaches us that each time we seek the path of privileges or benefits for a few to the detriment of the good of all, sooner or later the life of society becomes a fertile soil for corruption, drug trade, exclusion of different cultures, violence and also human trafficking, kidnapping and death, bringing suffering and slowing down development," he told the president.

Some of Francis' directions in the later meeting with bishops also had political echoes, with the pontiff especially telling the prelates they must move ahead in the work for the country.

"I urge you to not fall into that paralysis of standard responses to new questions," the pope told the prelates. "Your past is a source of riches to be mined and which can inspire the present and illumine the future. How unfortunate you are if you sit on your laurels!"

"It is important not to squander the inheritance you have received by protecting it through constant work," he said. "You stand on the shoulders of giants: bishops, priests, religious and lay faithful ... who have offered their lives so that the Church can fulfill her own mission."

Francis also repeated his call against clericalism in the church, stating: "It is necessary for us pastors to overcome the temptation of aloofness and clericalism, of coldness and indifference, of triumphalism and self-centeredness."

Saying the small details in the image of Our Lady of Guadalupe are a way of knowing the features of God, the pope said: "Guadalupe teaches us that God is known by his countenance, and that closeness and humble bowing down are more powerful than force."

Speaking in the largest cathedral in the Americas, known for its two high towers and complex and expansive stone work, Francis also pleaded for a church of humility and smallness.

"When the Church congregates in a majestic Cathedral, she should not fail to see herself as a 'small home' in which her children can feel comfortable," the pontiff urged. "We remain in God’s presence only when we are little ones, orphans and beggars."

"A casita, 'small home,' is familiar and at the same time sagrada, 'holy,' for it is filled by God’s omnipotent greatness," said the pope. "We are guardians of this mystery. Perhaps we have lost the sense of the humble ways of the divine and are tired of offering our own men and women the casita in which they feel close to God."

Anticipation for the pope's visit to Mexico has been extraordinarily high, with people lining the entire nine mile path from Mexico City's apostolic nunciature to the National Palace Saturday to try and catch a glimpse of the pontiff.

A festive, joyous atmosphere marked the pope's arrival at Benito Juarez International Airport Friday. As Francis disembarked the papal plane, he was greeted by thousands of Mexicans seated in temporary risers, waving flags and using the flashbulbs or screens on their cell phones to make a wall of light for the evening arrival.

After a formal welcoming on the tarmac by Peña Nieto, the pope spent some 20 minutes walking among the crowd. He greeted disabled children as well as a mariachi band dressed in traditional clothing, pausing to briefly put on a musician's black sombrero.

Francis ended his address to the bishops Saturday with a call for respect of both Mexican indigenous cultures and the work of lay people in the church. He also again pleaded with the bishops to be leaders steeped in the needs of their people.

"Mexico and its vast, multifaceted Church, stand in need of bishops who are servants ... guided by his Spirit who is the life-giving breath of the Church," said the pontiff.

"We do not need 'princes,' but rather a community of the Lord’s witnesses," he said. "Christ is the only light; he is the wellspring of living water; from his breath comes forth the Spirit, who fills the sails of the ecclesial barque."

Francis concluded with an affirmation that he as pope is "sure that Mexico and its Church will make it in time to that rendezvous with themselves, with history and with God."

Mexican bishops express solidarity with migrants as caravan is disrupted