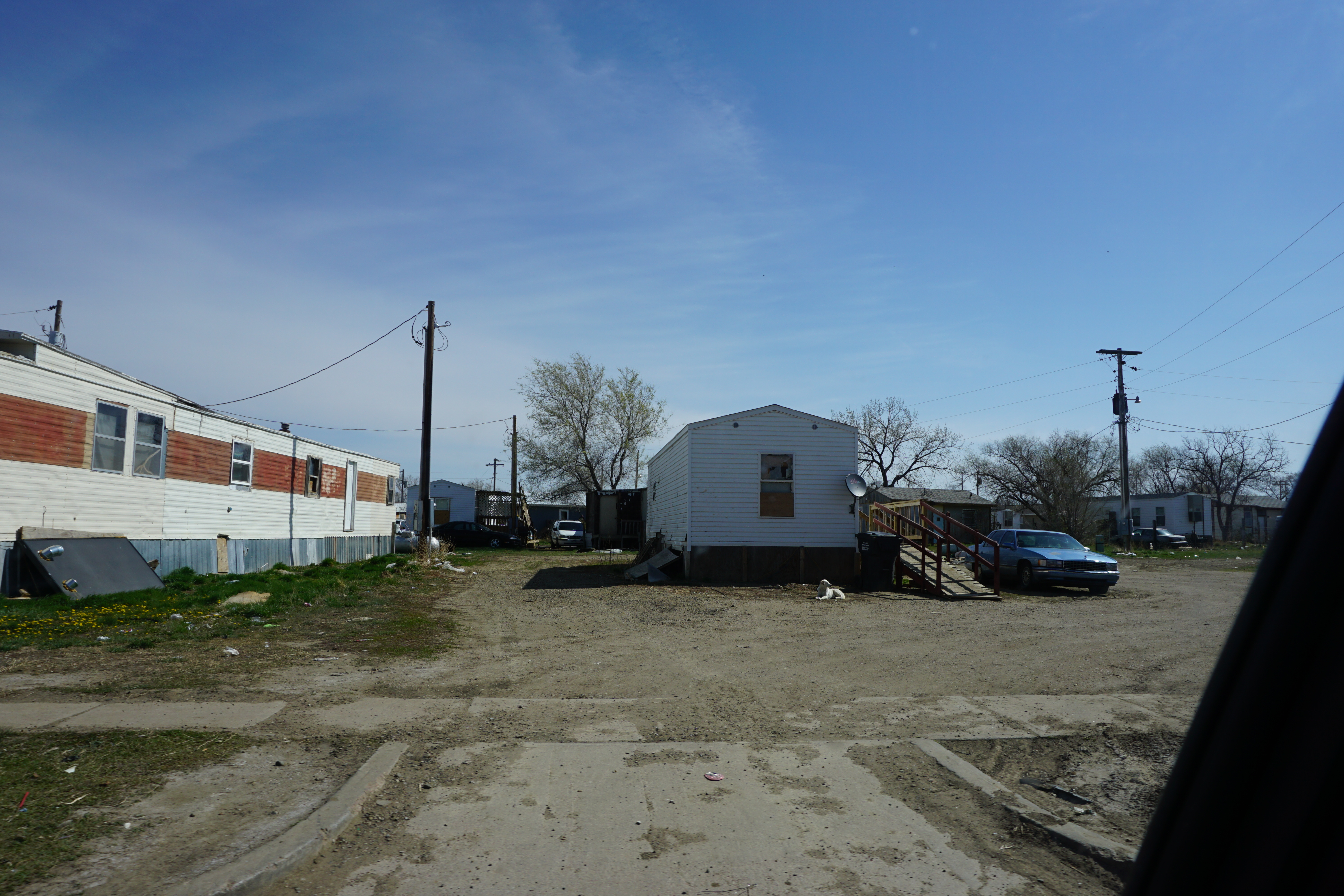 How does this history affect life in Cheyenne River today?

A visitor's first impressions can be deceiving. The physical environment is awe-inspiring. The sky casts a presence. Land rolls before the eye. There is a power here.

The Lakota people tend to be friendly and easygoing. Many display a solid sense of humor. You don't shake hands hard in Cheyenne River. That's rude. Traffic moves slowly and respectfully in Eagle Butte. Time passes with a stillness and quietude that vanishes "out in the rest of America."

It would be a refreshing place to visit — if not for the ever-present human suffering.

The homeless aren't hard to find in Eagle Butte — just look around. The produce at the local grocery store is often yellowed or rotten.

"How's it going?" a dollar store cashier is asked.

"Still breathing," he says, eyes to the ground.

Waiting in line, a young man in basketball shorts and an oversized T-shirt slouches. A row of fresh stitches from an unknown wound lines the back of his shaved head.

Out in the country, away from Eagle Butte — out in the prairie and down in the valley — decorated mounds of dirt dot rural Episcopal cemeteries.

They are fresh graves.

"This one was a burial I did," said the Rev. Marguerite Watson, an Episcopal priest. "A 12-year-old committed suicide. He hung himself in his closet."

Watson spends an astonishing amount of time burying people in Cheyenne River, where funerals last 24 hours and "death is a reality that constantly proves itself."

It's not all the Berkeley, Calif., native deals with, of course. "I have 10 congregations in an area roughly the size of the state of Connecticut," she said. "The whole reservation is, in the old-fashioned Anglican language, what would be called a cure, or a parish."

"I do a lot of liturgy," Watson said, explaining her priestly duties. "Book work and paperwork to hold me accountable to the diocese. … Prayers from the heart — I was brought up saying prayers from a book, so I really tried to learn to pray from the heart, and still be theologically cognizant. … I do a lot of anointing and healing prayer. … I do some pastoral counseling. … I've been asked to clean a house of spooks or ghosts or spirits."

She deals with conflict, "anything you might find in the inner city, guns, violence." Gang activity, too.

But death takes up most of her time.

"The suicide rate is off the map," Watson said. Each year, between five and six people under the age of 25 take their life, she said.

For his part, Hollow Horn said he has attended "about 29" suicide funerals, young and old, in his lifetime.

Watson, who lives in Eagle Butte with her husband, Joel, also an Episcopal priest, said she has averaged 55 burials a year since coming to Cheyenne River. This is her fourth year.

"There are two types of suicide on this reservation," she said. "Slow and fast. Drinking and drugs and diet. Diabetes is so prevalent around here."

She added, "I would say about 70 percent of the people I bury are under the under of 50. Those under the age of 30 are accidents, drunk driving, or suicide. And those between the age of 30 and 50 are drugs and alcohol. At least two a year freeze to death."

Watson said that 20 percent of the funerals she presided over the last year were for infants or stillborn children.

"Some families I see two and three times a year to bury a family member," she said.

Poverty and inequality are rampant in Cheyenne River.

The descendants of white homesteaders — people who were given reservation land at little to no cost in years past through a series of federal laws called the Homestead Acts — are present throughout Cheyenne River. Some of the ranchers own highly profitable farms. Others rent to out-of-state cattlemen for grazing purposes.

Otherwise, most live in small, beat-up residences. FEMA trailers are not uncommon, oftentimes stuffed to the brim with people.

Karen Ducheneaux, the daughter of Candace Ducheneaux, possesses a detailed knowledge of the poverty that exists in Cheyenne River. Over the past few years, she helped perform research for a charitably funded study called "Cheyenne River Voices" that created a "baseline data source" for the reservation, not unlike the U.S. Census.

"In a lot of ways our data differs" from that of the U.S. Census, Ducheneaux said. The reservation population that the study tallied, for instance, was about 30 percent higher than that of the census — 10,564 versus 8,470.

Similarly, "when we calculated income, it came out much, much, much lower, about half of what the United States identifies," Ducheneaux said.

According to the "Cheyenne River Voices" report, the median annual income for reservation families is $18,156. Meanwhile, annual family expenses are listed at a median of $14,055.

"That means you only have $4,000 of disposable income [a year] to save or to take your kids to a doctor's appointment," Ducheneaux said. "We're just talking about utilities, and monthly bills, like car payments, credit card payments … that's $300 a month for our families to do all their business."

On top of it all, the infrastructure in Cheyenne River is old and failing. "Our water system put a moratorium on building," Ducheneaux said. "You cannot build a new house; you cannot put a house where a water pit does not already exist. There are no empty houses. There are no houses sitting around for rent."

In Cheyenne River, about 75 percent of the tribe is currently living in poverty or hovering just above it, Ducheneaux estimates. "Even people with jobs," she said, "if something happens and they miss one paycheck, it just collapses."

How does that level of poverty compare to other U.S. reservations?

"If you look at the numbers, particular in Rosebud and Cheyenne River, those reservations in the Dakotas are some of the most dire in Indian country," said Blythe George, a doctoral candidate studying reservation poverty at Harvard University under noted sociologist William Julius Wilson.

Despite the limited housing, the poor economy, the failing infrastructure, the history of abuse and rampant death, "every year, our population increases," Ducheneaux said.

"It sucks," she said, wiping away tears.

Editor’s note: It may seem like papal statements from 500 years ago are ancient history. But Native American activists and scholars insist that Catholicism's past continues to affect the present. Papal bulls from the 1400s condoned the conquest of the Americas and other lands inhabited by indigenous people. The papal documents led to an international norm called the Doctrine of Discovery, which dehumanized non-Christians and legitimized their suppression by nations around the world, including by the United States. Now Native Americans say the church helped commit genocide and refuses to come to terms with it. This is Part Three of a six-part series on the legacy of the Doctrine of Discovery.