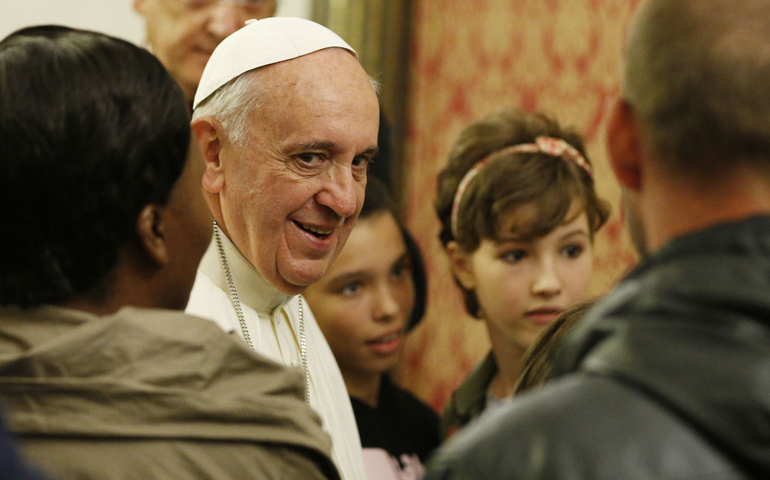 Pope Francis leads a meeting with the poor in the archbishop's residence Oct. 4 in Assisi, Italy. The meeting was in the famous "stripping room," where St. Francis stripped off his rich clothes, gave them to his father and began a life of poverty dedicated to Christ. (CNS/Paul Haring)

I have never expected to be affirmed for the work that I do. So it was shocking and a little disorienting to receive affirmation for my often-less-than-appreciated efforts from the very last place I would expect: the highest authority of the Roman Catholic church.

I have been working at the Catholic Worker soup kitchen on Los Angeles' Skid Row for over 40 years. I have published articles and books that have criticized prelates and politicians. I have occupied the cardinal's bell tower and his bulldozer to protest the exorbitant expense of a new cathedral. I have blockaded the mayor's bathroom, calling for porta-potties for the homeless. I have laid my body under city dump trucks to protect the personal property of the homeless from confiscation by city officials. I have gone to jail twice with the Occupy folks, protesting the excesses of Wall Street. I have always taken the part of marginal people, suffered the ire of the powerful, and felt the sting of being on the margins myself.

So I was thrilled to read Pope Francis' manifesto sharply criticizing the excesses of capitalism, calling for "a Church which is bruised, hurting and dirty because it has been out on the streets." This is not the church I have known since my days at St. Mary's Grammar School. It sounded a bit like what I have been doing for the last 40 years. I felt like the spy who came in from the cold, the voice in the wilderness suddenly propelled from the margins to the center of the very church I have spent my entire adult life criticizing.

Now for the first time in my life, I could hear a voice within the institutional church that echoed my own. Pope Francis' two fundamental issues are the same as mine: "the inclusion of the poor in society and ... peace and social dialogue." His is a strident voice calling for priests to leave the confines of their cozy rectories and secure sanctuaries and head out to care for and defend the victims of unmerciful financial markets. It is a voice that is not afraid to attack the only true "religion" of our era: capitalism. He tells us that "everything comes under the laws of competition and the survival of the fittest, where the powerful feed upon the powerless."

While I do not agree with every papal utterance, especially those regarding women and sexuality, this may be a revolution in rhetoric only with no official policies to make structural changes within ossified church structures. For instance, I don't expect the pope to sell off the treasures of the Vatican and give it to the poor anytime soon or to fire all of the conservative prelates appointed by his predecessor. But in the meantime, I don't care.

This is a pope who cooks his own food and refuses to fly first class, live in a papal palace, ride in a limousine or wear the royal trappings of his office. This is a pope who is the solitary world figure with institutional authority that has the temerity to speak out against the idolatry and misanthropic nature of the world capitalist system. This is the only world figure to speak out boldly against the systematic starvation of the poor.

This is a pope who occupies the bulliest of all bully pulpits in the world and has radically moved the discussion of Catholic theology from what happens below the waistline to what happens in the streets. And if nothing else happens, he has removed theological justification from every parish priest or bishop who wants to build an extravagant, unnecessary church or purchase sumptuous satin vestments. He has prevented Catholic legislators like John Boehner and Paul Ryan from wrapping Ayn Rand capitalism in the mantle of Catholic social teachings. He has ripped the mask of rectitude from the leaders of the developed world who can no longer preach trickle-down capitalism as if it were the gospel of salvation.

But most of all, he has given hope to the poor as well as to the lone voices in the wilderness, "bruised, hurting and dirty" from their thankless work for justice on the streets. They can now speak not only with the authority of Jesus and the Gospels, but with the authority of the Roman Catholic church itself. Finally, the message of those in the margin has been heard in the halls of power. As one of my favorite poets once said: "The times, they are a-changin'."

[Jeff Dietrich has been a member of the L.A. Catholic Worker for over 40 years. His most recent book is Broken and Shared: Food, Dignity, and the Poor on Los Angeles' Skid Row.]