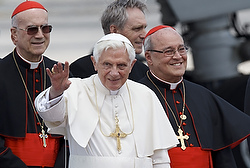 HAVANA -- A few hours before they planned to attend an outdoor Mass celebrated by Pope Benedict XVI, members of a Catholic dissident group were reportedly arrested by Cuban police.

The previous evening, Garcia and Labrada had given an interview to Catholic News Service at Labrada's home in the city's Old Havana neighborhood.

The Ladies in White, relatives of former political prisoners, march every Sunday after Mass at Havana's St. Rita of Casia Church to protest human rights violations by Cuba's communist regime.

The organization originated to protest the 2003 imprisonment of 75 Cubans connected to the Varela Project, an initiative promoting free elections and other political reforms. Those people and more than 50 others were released in 2011 under a deal brokered by Havana's Cardinal Jaime Ortega Alamino. Most of those released went into exile abroad.

The group has continued protesting on behalf of prisoners of conscience who they say are still inside Cuban prisons. Members are frequently arrested and released in less than 24 hours. They also have been attacked by what they say are government-controlled mobs.

In the run-up to Pope Benedict's March 26-28 visit, the Ladies had issued a public appeal for a meeting with him. Several members have said they were warned not to attend the pope's liturgies in the cities of Santiago de Cuba and Havana. During the trip, the cellular phone numbers of several suddenly became unreachable after they spoke with foreign reporters.