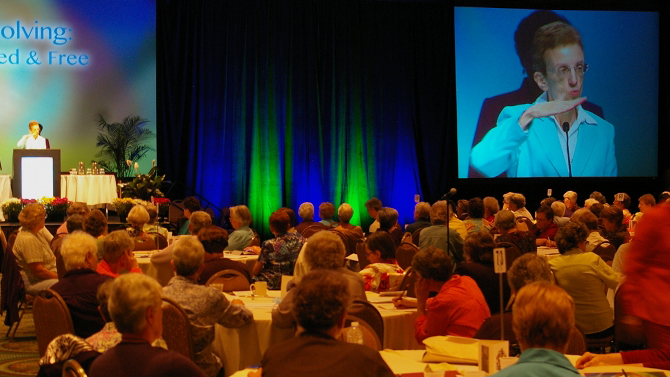 As U.S. Catholic sisters consider the future of their orders and their way of life, they should live with an “evolutionary spirit” and an understanding of the age and complexity of the universe, a theologian-sister told some 825 peers gathered for their annual assembly.

Evolution, Franciscan Sr. Ilia Delio told the members of the Leadership Conference of Women Religious (LCWR), does not describe a biological function but rather “a continuing process of unfolding involving the hands of God.”

In that process, Delio said, the sisters have an “awesome vocation.”

“We are about drawing in the poor, the lonely, the marginalized, all those seeking to be part of a whole,” she said. “This is nothing more and nothing less than the most awesome vocation, and that is to give birth to God.”

Delio’s remarks came on the second day of the annual LCWR assembly, which is to last through Friday. LCWR, which represents about 80 percent of the some 57,000 U.S. sisters, is meeting 18 months after the Vatican issued a sharp critique of the group and ordered a U.S. archbishop to exercise control over its statutes and programs.

That prelate, Seattle Archbishop J. Peter Sartain, is present at the assembly and is expected to address the sisters at length in a closed-door session today. Also present at this year’s assembly is Archbishop Carlo Viganò, the Vatican’s apostolic nuncio, or ambassador, to the U.S.

The sisters are expected to receive an update from their leadership in a closed executive session this morning on the outcome of conversations they have had with Sartain over the past months, one member told NCR.

Discussion between LCWR and Sartain have largely taken place outside public scrutiny.

The sister, who spoke Wednesday on condition of anonymity because the group’s leadership has asked members to refrain from talking to media about the Vatican mandate, said Sartain is expected to speak to the assembly this afternoon in another closed session.

Sisters, the source said, have been told by LCWR leaders to expect the archbishop to speak for 30 minutes before taking questions from “several representatives” of the more than 100 tables at which the sisters are seated.

LCWR president Franciscan Sr. Florence Deacon asked the LCWR members not to discuss Sartain’s meeting with members of the press in remarks at the opening of the assembly Tuesday.

“Only at the conclusion [of the assembly] will we make any public statement about the proceedings,” Deacon said. “Please do honor that and refrain from making any commentary to the process about what is occurring each day as we go on.”

The keynote address by Delio, who holds doctorates in pharmacology and theology and is known for her work on environmental issues, was titled: “Religious Life on the Edge of the Universe.”

Speaking in two sessions for more than a combined 2.5 hours -- and taking questions for another hour -- Delio first focused on the continuing human understanding of the history and function of the 13.8 billion-year-old universe before asking how the historical and mystical persons of Jesus Christ fit into those understandings.

“A dynamic universe provokes the idea and the understanding of a dynamic God,” Delio, the director of Catholic studies at Georgetown University, said. “This is not a stay-at-home God.”

“This is a God who is deeply immersed in a love affair with the beloved, the creation which flows out of his divine heart,” she continued. To say that God is love, she said is “to mean that God is eternally and dynamically in love.”

Drawing from her description of an evolutionary universe, Delio said there were four lessons she wanted to highlight for the sisters:

Peppering her talk with references to theologians and scientists, ranging from Plato and Aristotle to Galileo and Newton to Aquinas and Fr. Raimon Panikkar, Delio also told the sisters to consider Jesus as a “whole-maker” -- someone who “brings together what is fragmented and divided.”

“For too long we have had a sense of Catholic as sameness,” Delio said. “In the person of Jesus of Nazareth there is a new spirit -- a spirit of gathering. Jesus is constantly going out and gathering in.”

“To live in the risen Christ is to see the world in new eyes, to be gatherers … to live from a new center of love,” she said. “What happens in Jesus is to continue in our lives as well, if the Christ is the fullness of what our lives are intended to be.”

On Wednesday morning, before Delio’s talk, the sisters had Mass with Sartain and Viganò, who concelebrated.

Later in the morning, the sisters prayed in a 30-minute ritual that involved reflection on the Chinese character for self-emptying love and on the mantra: “Deep within us, shared among us, may we ever keep the mind and heart of Jesus Christ.”

On Friday, the group will bestow its highest honor on Franciscan Sr. Pat Farrell, who led LCWR from 2011 to 2012 and guided its initial response to the Vatican mandate. LCWR says it is honoring the former president for the leadership she showed "through an exceptionally challenging time."