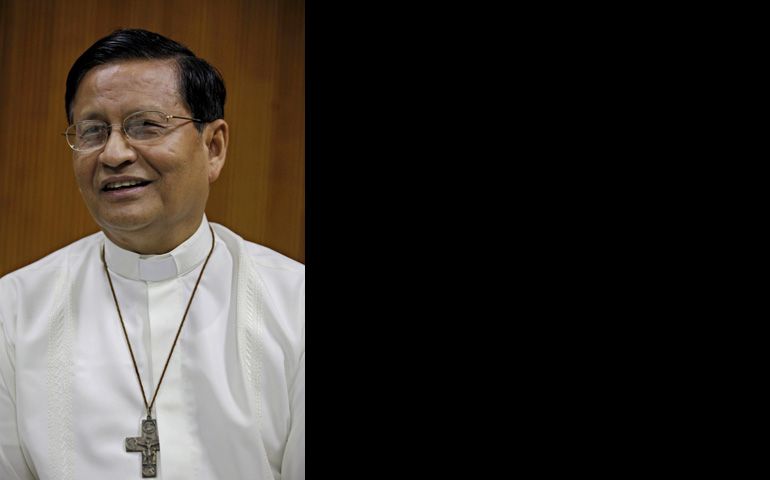 Cardinal-designate Charles Bo of Yangon, Myanmar, smiles during a press conference at his office in Yangon Jan. 6. He is one of 20 men Pope Francis will elevate to cardinal in a Feb. 14 consistory. (CNS photo/Lynn Bo Bo, EPA)
This article appears in the Consistory 2015 feature series. View the full series.

Myanmar — Cardinal-designate Charles Bo's appointment as Myanmar's first cardinal is seen as support for his efforts to push national reconciliation, peace, justice and freedom as his people struggle with religious and ethnic tensions and other problems.

The new position draws attention to Cardinal-designate Bo's country, formerly Burma, which is going through a transitional period and is gaining a new status in the world scene, said Spiritan Fr. William Headley, an American sociologist.

Pope Francis announced Jan. 4 that the archbishop of Yangon would be among 20 men elevated to cardinal Feb. 14.

Headley worked with Bo on activities of the U.S. bishops' Catholic Relief Services in Rome, Myanmar and other places in Asia.

He noted Bo's dedication to justice and peace.

"He will have a chance to apply that (world status as cardinal) in his own country with some of the justice concerns there and it could be an example -- a model -- to some places in Asia struggling with the same kinds of questions," Headley told CNS.

Bo, 66, also chairs the Office of Human Development of the Federation of Asian Bishops' Conferences and is a member of the Pontifical Council for Culture.

In his pastoral letters, he "has been very sympathetic to the Muslim minorities" in Myanmar, Headley observed. He said the cardinal-designate's way of helping ethnic and religious groups of people in his country offers an example "at a time when we're approaching our celebration of 'Nostra Aetate,'" the Second Vatican Council's 1965 Declaration on the Relation of the Church to Non-Christian Religions.

In his message for the New Year, Bo decried "violence toward our Muslim brothers and sisters" and other groups, saying these did not only kill people and destroy buildings, but also led "to the death of fraternity and the destruction of brotherhood." He stressed relationships must be restored to achieve true peace.

Accusations of rape, killings and other disputes in 2012 sparked riots, razing of communities and other violence between Rohingya Muslims and Buddhists. While some people say Rohingya -- estimated to number 800,000 -- are indigenous to Myanmar's Rakhine state, the government considers them illegal migrants from what is now Bangladesh and refuses to grant them citizenship.

Myanmar's population of more than 50 million is predominantly Buddhist. It has about 700,000 Catholics.

Charles Maung Bo was born in Mohla, Oct. 29, 1948. He was ordained a Salesian priest in 1976 and served as pastor in various parishes until he was assigned as formator in 1985. In 1990, he was ordained bishop for Lashio Diocese. He headed other dioceses as its bishop or administrator before he was made archbishop of Yangon in 2003.

Fr. Gabriel Htun Myint of Myanmar said he believes the bishop's ministry among the Kachin people and now in Yangon among the "most troubled" ethnic minorities, and the fact that he is well-versed in their languages, contributes to his enthusiasm to work for national reconciliation.

His creation as cardinal is "recognition of the coming of age of the church of Myanmar" that celebrated its 500th anniversary in 2014, said Filipino Claretian Fr. Samuel Canilang who directs the Institute for Consecrated Life in Asia. Fifty-two Myanmar priests, religious and lay pastoral workers have graduated from the institute over the years.

He said the church in Myanmar is "very vibrant. Priests, sisters, and laypeople -- even young ones -- work and live with the people and help with pastoral services of the church," said the priest, who visits graduates and bishops there periodically.

In separate interviews, Canilang and Headley noted Bo's calm disposition, "even while he speaks out against injustices and advocates for democracy and rights of all people," Canilang said.

The cardinal-designate is a "gentle man" who is "not excitable, and I think he'll be a force for stability in his country as it tries to move forward," Headley said.

After elections in 2010, a government with elected officials replaced a military junta in Myanmar.