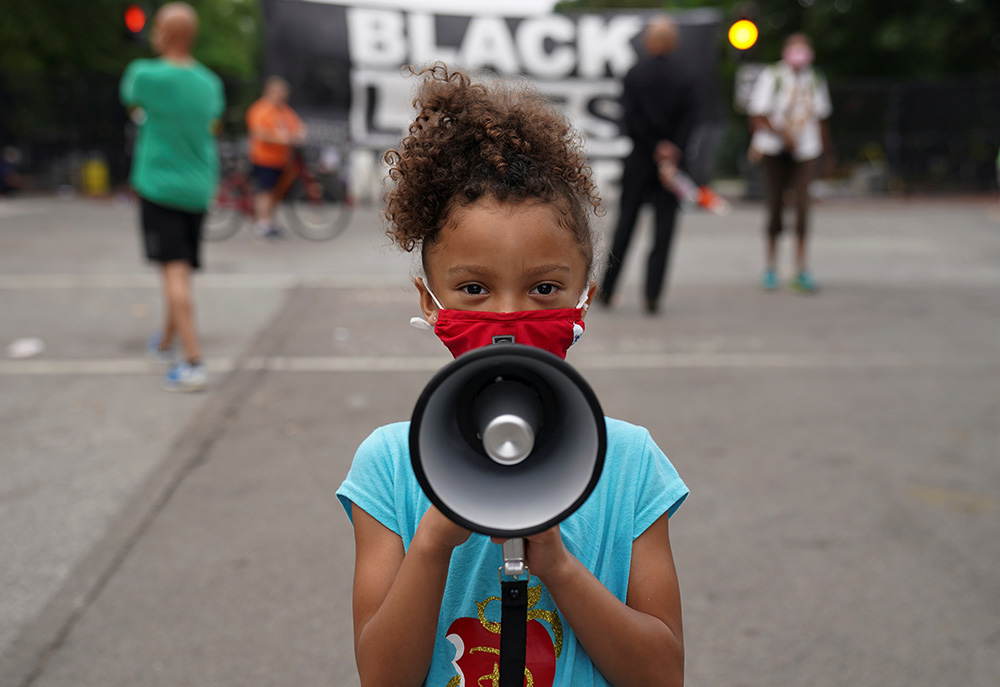 Mischa, 6, from Maryland, holds a bullhorn in front of a "Black Lives Matter" protest sign near the White House in Washington June 10, 2020. (CNS/Reuters/Kevin Lamarque)

Nine years ago, in her "Love Letter to Black Folks," Black Lives Matter co-founder Alicia Garza discerned the signs of the time. She used social media to prophetically highlight Black Americans' griefs and anxieties after George Zimmerman's acquittal in the death of Trayvon Martin. She wrote on Facebook, "We don't deserve to be killed with impunity. We need to love ourselves and fight for a world where Black lives matter. Black people, I love you. We matter. Our lives matter."

Millions of Americans responded to her message because it expressed genuine love for Black persons, not a social theory about anti-Black oppression.

"Black Lives Matter" captures the essence of the entire Black prophetic tradition. In the eyes of God and Christ's followers, Black lives matter. Despite this, in recent years, many Americans and, unfortunately, many prominent U.S. Catholic bishops have made countless disparaging comments about a movement committed to Black life.

In a video message to a meeting of the Congress of Catholics and Public Life in Madrid last November, Los Angeles Archbishop José Gomez criticized the new political and social justice movements in the United States as pseudo-religions seeking to replace traditional Christian beliefs.

Last April, in an interview about his book on Catholic social teaching, Los Angeles Auxiliary Bishop Robert Barron correctly explained how Catholics should "never think of economics and politics as secular, if by that we mean divorced from God and God's purposes." However, in the same interview, Barron links so-called "woke" ideologies championed by many across the United States to European modern and postmodern thinkers like Marx, Nietzsche and Foucault. According to Barron, these thinkers advocate social theories that divide humanity into two classes of oppressors and oppressed, focus too much on identity, demonize the market economy and ignore God's command to love our enemies.

To appreciate the Black prophetic tradition, we must first turn to Judaism, prophecy and the Hebrew Bible (or Old Testament). In his classic book The Prophets, Rabbi Abraham Joshua Heschel defined prophets as persons who say no to their unjust society, and their no springs from God's pathos or concern for the oppressed. God so loves the world that God pays special attention to neglected creatures in the world. When it comes to good and evil, God is never neutral but always partial to justice.

"All men care for the world," says Herschel, "The prophet cares for God's care." Suffering pains God, and oppression enrages God. As spokespersons for God, prophets express God's deep concern for the least among us through their words and deeds.

In the opening lines of Gaudium et Spes, the Second Vatican Council beautifully summarized how all Christians should live into their prophetic identity. "The joys and the hopes, the griefs and the anxieties of the men [and women] of this age, especially those who are poor or in any way afflicted," says the council, "these are the joys and hopes, the griefs and anxieties of the followers of Christ. Indeed, nothing genuinely human fails to raise an echo in their hearts."

Black Christians know deep in their hearts that God cares immensely about Black children, women and men who suffer under the enduring legacy of chattel slavery and U.S. apartheid and continue to struggle under worldwide systemic racism and white supremacy. The pathos of God for Black lives is the wellspring for the Black prophetic tradition in the U.S.

The leaders of the Black Lives Matter movement do not reject Christians or Christianity; they reject respectability politics with churches that minimize the prophetic witness of Black women and LGBTQ persons.

The Black prophetic tradition began on the shores of West Africa, where tribes and villages attempted to resist captivity. It found its spiritual vitality during the Middle Passage when "the Spirit interceded with sighs too deep for words" in the hearts of African women, children and men chained in the belly of slave ships (Romans 8:26).

It found its earliest expression in spirituals or religious folk songs. Despite laws denying them adequate education or religious freedom, anonymous poets and musicians composed songs that expressed their prophetic no. They sang, "No more auction block for me," and "O, freedom over me." They connected God's concern for Israel under Egyptian slavery with their enslavement. We see this connection in numerous spirituals such as "Go Down Moses," "Didn't Old Pharaoh Get Lost in The Red Sea," "O Mary Don't You Weep," and "I Am Bound for the Promised Land," to name a few.

We even hear this prophetic tradition in jazz and blues music. Billie Holiday adapted and sang Abel Meeropol's "Strange Fruit" because the poem reminded her of her father's denial of medical treatment at an all-white hospital for his chronic lung disease. Unlike many European and Euro-American expressions of Christianity, the Black prophetic tradition doesn't maintain a strict contrast between the sacred and secular. The prophetic often manifests in Black Christians' words and deeds outside the institutional church.

Often overlooked and marginalized, Black women have served as the greatest prophets within the Black prophetic tradition. Sexism in Black churches forced many Black women to prophesize about Black life and survival outside the institutional church.

After the lynching of her friend, Black journalist Ida B. Wells-Barnett investigated and reported internationally on white supremacist mob violence between the 1880s and 1930s. Along with Mary Church Terrell and Mary McLeod Bethune, Wells-Barnett started the Black women's clubs movement to combat racism and improve the lives of Black families.

The Women's Political Council (WPC) in Montgomery, Alabama, serves as another example. After hearing complaints from Black public riders, mainly women, the WPC started the Montgomery Bus Boycotts under the leadership of Jo Ann Robinson, an English professor at Alabama State University.

The leaders of the Black Lives Matter movement do not reject Christians or Christianity; they reject respectability politics with churches that minimize the prophetic witness of Black women and LGBTQ persons.

Because he spoke with rare clarity, Martin Luther King Jr. stands as a powerful witness to the Black prophetic tradition, yet we reduce him to his famous quotes and forget how immensely unpopular he was during his time for speaking out against poverty and war.

The Black prophetic tradition is more extensive than King — and it is all around us.

Banning critical race theory, intersectional feminism, "The 1619 Project" and The Bluest Eye will not destroy the tradition. Lauryn Hill reminds us that the New Jerusalem is in every ghetto and every urban place we know. The tradition is not a social theory; it uses social theory. It employs any means necessary — poetry, philosophy, music, art, tweets, journalism, fashion, slang or swagger — to declare a prophetic no to anti-Blackness and the affirming yes to Black life.

A version of this story appeared in the March 18-31, 2022 print issue under the headline: The Black prophetic tradition is all around us.