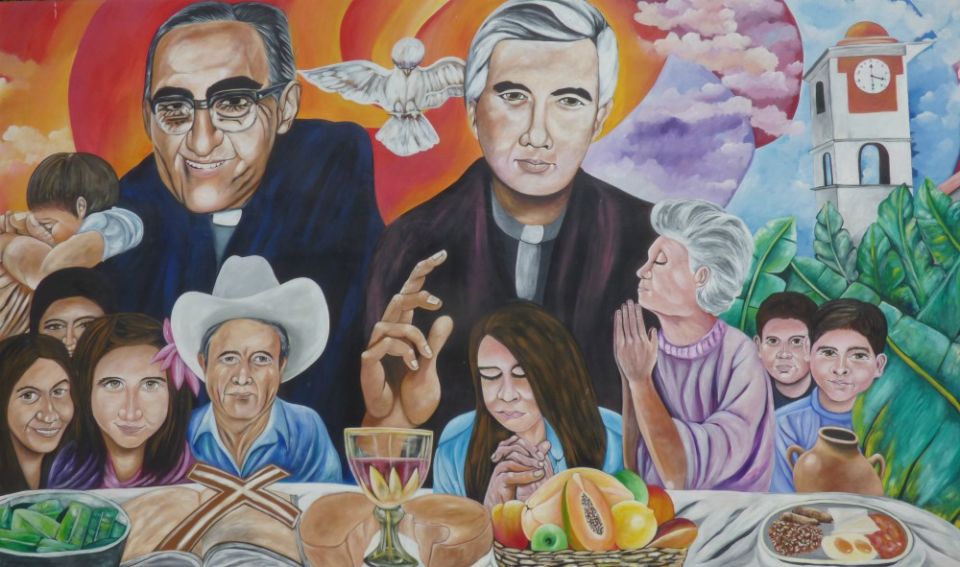 A painting of St. Óscar Romero and Jesuit Fr. Rutilio Grande is seen in the rectory of San Jose Church in Aguilares, El Salvador. (CNS/Octavio Duran)

When the pastor of a predominantly African American Catholic Church in Oakland, California, publicly accused his bishop of being a racist, overly sensitive to the opinions and wishes of the white and wealthy Catholics in his diocese, he spoke with the passion and intemperance of a biblical prophet.

Redemptorist Fr. Aidan McAleenan, pastor of St. Columba Church for the past 12 years, made the charges against Bishop Michael Barber in an emotional Facebook post June 14 and in his Pentecost homily.

He also declared that the bishops of the United States were not sufficiently supportive of the Black Lives Matter movement because they feared offending white Catholics.

"The bishops of the United States have their knee on the neck of the people of God, the church. We need as a church to be able to breathe," McAleenan asserted in his video.

I have never before heard a parish priest publicly confront what many progressive Catholics consider to be the church's other "shameful secret." McAleenan's accusation calls attention to the relationship between the church hierarchy and the wealthy and powerful in countries around the world.

The uncomfortable fact is that, more often than not, Catholic bishops and cardinals in the developing world have historically kowtowed to and served the interests of the oligarchs, the dictators and the generals, even when those individuals were killing the people of God with impunity through their wars and reigns of terror.

In Latin America, for example, some of the church's supposed servants of God socialized and fraternized with men who sent soldiers and militias to kill literally hundreds of thousands of peasants, indigenous persons, union leaders, teachers, Catholic lay ministers, nuns and priests.

The reasons for the unholy alliance between many church leaders and the rich and influential may vary, but one stands out as self-evident: The bishops need the money and political influence of these wealthy and powerful individuals because of the way the institutional church is structured.

Prelates have built soaring edifices to honor a wandering Galilean who had no place to lay his head. They have created luxurious homes and offices for themselves. All this takes a lot of money. The popular churches serving the poor and vulnerable may be rich in faith but they don't have much else.

Over the centuries, the church has convinced ordinary Catholics that expensive cathedrals and large churches are essential to the worship of God and as official homes for the Christian community. This situation can cause serious problems for an organization claiming to represent the authentic teachings and message of Jesus.

In our day and age, how many of the church's "shepherds" serve and consort with those who actively harm the sheep?

How many bishops have friends who pay their workers too little to live, do not provide them with safe working conditions and safety equipment where needed, who evict poor tenants or let buildings slide into decay in order to increase their wealth?

How many bishops have friends and do business with individuals who contribute generously to politicians to obtain legislation to lower their taxes or make it possible to pay none at all? These wealthy donors to the church do not care that taxes are absolutely essential to pay for necessities like health care, food and housing for poor children and families.

In America's Catholic churches, there have undoubtedly been countless sermons preached against abortion. Yet how many homilies can you recall railing passionately against business leaders, bankers and politicians whose policies harm and even result in the deaths of children once they are actually born?

An examination of church and Catholic school closures in the United States will show that those who lost their schools or places of worship to "economic realities" were disproportionately the poor and people of color. What does this say about the men making these decisions? Well, as Jesus proclaimed, "Where your treasure is, there will be your heart also" (Matthew 6:21).

What should be happening is this: The bishops, as exemplary followers of Christ, would approach the rich and powerful and convert them to embrace Gospel values. "Whatever you do to these the least of my brothers and sisters, you do it to me." For those wealthy persons willing to change and sincerely follow Jesus, offering a tithe of their riches to support the buildings, the clergy and the works of mercy in a diocese would simply be part of their Christian service to God.

Unfortunately, priests are not generally elevated to higher office because of their wisdom and virtue. They get there by being good fundraisers and skilled politicians.

Of course, there are wise, virtuous bishops attuned to the needs and care of the people. Archbishop Óscar Romero became one of these when the evil of the despots and oligarchs in El Salvador touched him personally in the murder of his good friend Jesuit Fr. Rutilio Grande.

Related: Our Romero moment: Time for US bishops to stand up against racism

Sadly, in many cases the conversion has gone the other way: the bishops have been converted to the ways of the rich and powerful.

In the fraying societies of planet Earth, at this moment filled with devastation for so many of our brothers and sisters, we need church leaders who will be of help and service to the vulnerable and the powerless. At this moment, when people are rising up against the hatred and evil of racism, we must have church leaders who will support and nurture people of color and their children, even if it means offending their white friends and wealthy donors.

Perhaps McAleenan's passionate if intemperate words can begin a conversation on how Catholics can demand that our bishops both be and create a church leadership that fully embodies and expresses the love and care of its founder. That would mean bishops and cardinals around the world working publicly to insist on government and corporate policies that make it possible for all — people of color, the poor, the sick and the most vulnerable — to live and to flourish in a just society.

What would Jesus do if he were to return in 2020? In the light of this profound question, why not invite Pope Francis to require a prayerful examination of conscience on the part of the members of the bishops' conferences in every country.

The questions: How well have you served the poor, the vulnerable and people of color in your diocese? In what ways have you failed to treat these as Christ would wish?

Then the pope — as an advocate for the "least among us" — could ask each national conference to report its answers, along with specific plans detailing how it can best put Jesus' intentions into practical action in its own dioceses.

This could transform our church and, with it, the entire world, and go a long way toward moving much further along the arc of the moral universe that "bends toward justice," in the immortal words of the Rev. Martin Luther King Jr.

[Siddika Angle is a former newspaper reporter and feature writer who has taught world religions, spirituality and biblical studies at various universities and parishes in the San Francisco Bay Area. She has recently published a novel, Song of the Turtle, about a Jesuit priest, a woman scholar and the war in El Salvador in the 1980s.]

Commentary | We need bishops who will challenge the rich and powerful