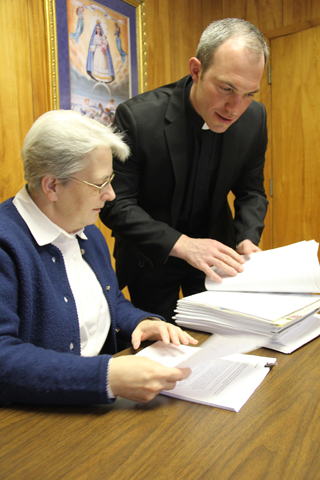 In the month since NCR published a story about the efforts of some Catholic dioceses to ascertain the thoughts of lay Catholics on a variety of issues related to the family, readers and diocesan officials have reached out to say that they, too, took part in the historic consultation with laity.

Four dioceses -- Charleston, N.C., Erie, Pa., Superior, Wis., and Trenton, N.J. -- sought opinions via an online survey and reported back results. Additionally, the Superior diocese surveyed parishes and reported general findings in its diocesan paper. (See all of the archdioceses and dioceses who sought feedback from the laity.)

Another four dioceses -- Evansville, Ind., Fort Wayne-South Bend, Ind., Owensboro, Ky., and Charlotte, N.C. -- and the archdioceses of Seattle and Dubuque, Iowa, offered an online survey but have not posted results.

Part of NCR's research was to ascertain how easily information could be found on a diocesan website. With the new information provided by readers' and diocesan officials' emails, still fewer than half of all U.S. dioceses have information about the synod on their websites.

As was first reported in NCR last October, the Vatican distributed to dioceses around the world a set of questions on issues related to family life. A letter accompanying the questionnaire asked that it be shared "as widely as possible to deaneries and parishes so that input from local sources can be received." The answers to those questions are to inform the agenda of the October Synod of Bishops on families in Rome.

Nearly 200 readers sent emails to NCR in response to the story "Some US dioceses report results of questionnaire." Many expressed disappointment that their particular diocese did not actively seek answers to the questions. In some cases, readers who lived and worshiped in a diocese that did participate said they were nonetheless unaware of the survey.

In another instance, the Seattle archdiocese cited the short time frame allotted for the consultation, and Archbishop J. Peter Sartain therefore asked priests to conduct consultations on the parish level. This method of consultation, not uncommon, led to some parishioners being surveyed and others not knowing about the process.

Daniel Cox, research director at the Public Religion Research Institute, said that a project of this magnitude required more time than dioceses were allotted to glean the most comprehensive information.

In particular, he said that former Catholics could provide invaluable information to the church.

The newly discovered dioceses that had shared findings from the consultation reported similar results as those of the dioceses highlighted in the first NCR story.

Bishop David O'Connell reported on the website of The Monitor, Trenton's diocesan newspaper, that just over 1,000 people had responded to the questionnaire, which had been available in print and online.

He wrote that most of the respondents "were unfamiliar with the concept of natural law." Some said they felt church teachings were "not sufficiently explained" or "irrelevant."

According to respondents, "many Church teachings are followed, but a majority voiced their opposition to the Church's ban on contraception," O'Connell wrote. In addition, "a significant number" questioned the church's position on same-sex marriage.

Like in other places, many Catholics in Trenton "advocated an easier process for obtaining marriage annulments."

Among the most frequently cited challenges facing the church, O'Connell wrote, were the clergy sex abuse crisis, priestly celibacy, the ordination of women, preaching, and the "lack of a lay voice in Church decision making."

O'Connell admitted in his column that he was unsure about how the synod would use the survey results, but he wrote, "As Bishop, I did feel that I should offer some sense of the information gleaned from my review."

The Charleston diocese also released a detailed report about the findings of its online survey, in which 1,308 people participated.

The survey used in Charleston appears to have been based on the questions distributed by the Vatican, asking participants if they agree with certain statements. For example, regarding same-sex unions, the survey states, "The Catholic Church provides excellent pastoral care to persons in same-sex unions." (The report states that only 6 percent of respondents "strongly agree" or "agree somewhat"; 75 percent "disagree somewhat" or "strongly disagree.")

Charleston also provided examples of narrative-style answers that participants were allowed to submit, often highlighting answers from individuals who advocated for the church to "re-educate those inside and outside the faith" on its teachings, as well as those who wrote that the church is out-of-date and needs to reach out to traditionally marginalized groups.

Many readers emailed NCR, expressing disappointment that they were not given an opportunity to participate in the consultation.

One reader wrote that if dioceses can coordinate announcements about diocesan fundraisers in every parish, they should have been able to promote the survey, too.

"Our bishop has recently initiated a special campaign for increased funds. Last Sunday a video appeal was shown at all masses in our parish and, I assume, all other parishes in the diocese. If we are important to the funding for a seemingly ever-increasing diocesan budget, it would follow that something as important as the Pope's request on family issues would also warrant our input," a reader from Florida wrote to NCR.

Even in dioceses that did offer a survey, some readers expressed frustration at not being able to easily find the survey or information about the synod.

In one case, a reader in a diocese that was not offering an online consultation found an online survey from another diocese and submitted answers there. In another, a reader took a survey distributed by the activist group Call to Action, and photocopied and distributed it to others in the parish.

Several noncanonical organizations, including Call to Action, published their own surveys online. Groups such as Catholics in Alliance for the Common Good and My Catholic Family Campaign launched their own versions of the survey shortly after the news broke about the Vatican's request for consultation.

[Michael O'Loughlin is a freelance writer in Washington, D.C.]

A version of this story appeared in the April 11-24, 2014 print issue under the headline: Additional survey reports tell similar stories.