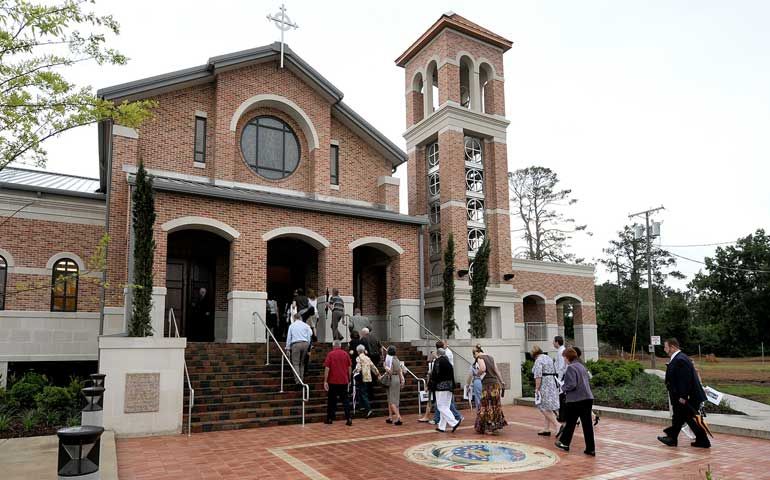 People walk into the new Our Lady of Lourdes Church in Slidell, La., before it was officially dedicated by New Orleans Archbishop Gregory Aymond in May 2010. A revised translation of the dedication rite for a new church or altar was among the items scheduled for a vote at the U.S. bishops' Nov. 10-13 meeting in Baltimore. (CNS/Clarion Herald/Frank J. Methe)
This article appears in the USCCB Fall 2014 feature series. View the full series.

Washington — The U.S. bishops' conference will hold its annual Fall General Assembly in Baltimore Nov. 10-13. The agenda includes a discussion of last month's Synod of Bishops on the family.

A number of liturgical items will be discussed and a handful of elections held. Additionally, Archbishop Joseph Kurtz of Louisville, Ky., elected president of the U.S. Catholic Conference of Bishops a year ago, will deliver his first presidential address.

In some ways, "the events surrounding the [synod on the family] have somewhat eclipsed the November meeting," Richard Gaillardetz, the Joseph Professor of Catholic Systematic Theology at Boston College, wrote in an email to NCR.

In his address as conference president, Kurtz will have a chance to talk about the synod, "and it will be interesting to see how he interprets the synodal process and preliminary results," Gaillardetz wrote.

"Some prominent bishops like [Archbishop Charles] Chaput in Philadelphia have been quite critical while others like [Cardinal Donald] Wuerl in Washington, D.C., have been more supportive. Will Kurtz focus on Francis' call for the primacy of mercy and the need for an open and respectful conversation, or will he align himself more with those bishops who seem particularly fearful of compromising church doctrine?"

Speeches aside, a number of votes will be held.

By most accounts, the bishops will vote to decide who to send to the ordinary General Assembly of the Synod of Bishops in October 2015. The U.S. bishops' conference is typically allowed three or four representatives.

Another vote will determine "whether to pursue a revision of the section of the 'Ethical and Religious Directives for Catholic Health Care Services' dealing with forming partnerships," in order to "incorporate guidance the U.S. Conference of Catholic Bishops (USCCB) received from the Vatican's Congregation for the Doctrine of the Faith this past February," according to a conference press release.

The guidance outlines how "to ensure that Catholic health care institutions neither cooperate immorally with the unacceptable procedures conducted in other health care entities with which they may be connected nor cause scandal as a result of their collaboration with such other entities," the press release said.

The conference will also hold votes for the conference's secretary-elect, as well as the chairmen-elect of five committees. The conference secretary election features candidates Archbishop Gregory Aymond of New Orleans and Archbishop Timothy Broglio of the Archdiocese for the Military Services.

The committee elections include candidates:

A press release from the conference said that liturgical items will include:

Generally, church observers say they will be watching to see if any of the votes or liturgical decisions reflect a change in tone within the U.S. bishops' conference.

"One of the big issues over the last 20 months has concerned the extent to which prominent leaders among the U.S. bishops would revise their current public stance and policy priorities in the light of the agenda of Pope Francis," Gaillardetz wrote. "For example, we still hear a lot more about religious liberty from some bishops even though it does not seem a priority, at least in the American context, for Pope Francis."

Why did the Vatican sack an anti-vaccine bishop in Puerto Rico?