Skip to main content
News
This story appears in the Francis: The Environment Encyclical feature series. View the full series. 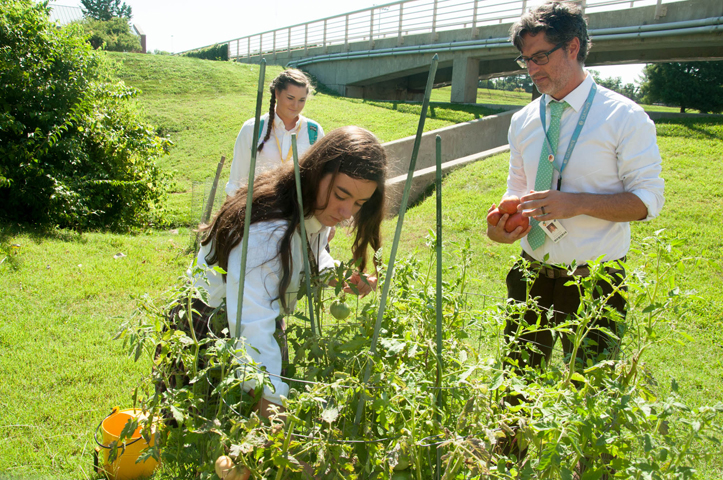 Father Ryan High School theology teacher Brent Fernandez grows a garden at home, raises chickens, and rides his bicycle to school when he can.

In the summer, he takes students to visit Bethlehem Farm in West Virginia, a Catholic intentional community where he once lived for two years.

He is passionate about treading lightly on the earth and embracing a less consumer-driven lifestyle.

"I'm not perfect, but I try to live sustainably as much as possible," he said.

On the June morning when Pope Francis' encyclical "Laudato Si', on Care for Our Common Home" was released, Fernandez "was like a teenager on the day their favorite band drops a new album." He pored over it, immediately connecting with so much of what Pope Francis wrote about, formulating how he would incorporate the encyclical into his junior-level Catholic social teaching class at Father Ryan.

Fernandez is one of many theology and science teachers at the three Catholic high schools in the Diocese of Nashville who will be incorporating the papal encyclical into their curriculum this school year.

"Laudato Si'" is the new appeal from Pope Francis addressed to "every person living on this planet" for an inclusive dialogue about how humans are shaping the future of our planet. Pope Francis calls the church and the world to acknowledge the urgency of our environmental challenges and to join him in embarking on a new path.

Local Catholic high school teachers see their classrooms as the perfect laboratory for participating in that dialogue.

Fernandez's class textbook does not address the environment until its final chapters, but he said the encyclical gives him license "to push it forward and talk about it right up front."

One of the most important points from the encyclical that Fernandez hopes to relay to students is the interconnectedness of all life on earth. "We like to put issues in separate containers, and we forget that they're all related," he told the Tennessee Register, newspaper of the Diocese of Nashville.

And, as Francis points out in "Laudato Si'," "those who are suffering the most from environmental degradation are the poor, people on the margins."

"Mr. Fernandez was the first teacher that showed me that every single social issue is like a huge web, and showed us how it all connects back to our faith," said Father Ryan senior Kelsie Hubbuch.

Hubbuch is the leader of the school's gardening club this year, which Fernandez moderates. They tend a small garden plot on the campus, which was overgrown during the first week of school, but still producing tomatoes, basil, peppers and peas.

Next to the garden is a compost bin, where kitchen scraps and yard waste regenerate into rich soil for the garden.

"I can see the paschal mystery in compost," said Fernandez, only half joking. "The cycle of life, death and resurrection;the garden is one of the easiest places to see it."

Teaching students about growing their own food organically, without using chemical pesticides, is just one small way to encourage them to better care for the earth, Fernandez said. "Being good stewards of the earth, we're not just doing this because it's a fad. Caring for creation is part of our faith."

At St. Cecilia Academy, students also tend a garden, complete with a greenhouse built out of recycled plastic bottles, and the school has started several other initiatives to reduce waste around campus. Some teachers have gone paperless in their classrooms, with students using iPads to take notes and complete assignments; the school also has a newly reinvigorated recycling program.

This year, several teachers will be using Pope Francis' encyclical to help students think more critically about their role as stewards of creation.

"Laudato Si'" was written "as a means to open a dialogue," said Charles Martinez, chair of the St. Cecilia science department, and he will be exploring it with his students in his advanced placement biology and chemistry honors classes.

"We'll be using the Socratic method. It will be me asking them questions, not feeding them the answers, and we'll wrestle with the truth," he said.

During the St. Cecilia interim program in January, Martinez will lead a trip to Arizona where students "will explore the beauty and diversity of God's creation" while reading "Laudato Si'" "in the natural laboratory that is present in a beautifully complex desert landscape," he said.

"It is my hope that girls will walk away from this trip equipped with knowledge and experience to guide them to pose their own questions and the confidence to seek answers that point us in the positive direction of giving praise to God by exploring and communicating the beauty of creation," Martinez said.

St. Cecilia teacher Louisa Bateman, who will be teaching environmental science this year, said that she is "really excited about using this impactful and rich document" as a teaching tool. Pope Francis' encyclical, she said, "is easy to read and accessible," which is especially helpful reaching a high school audience.

Bateman wants her students to see that the issues Pope Francis addresses in "Laudato Si'," such as climate change and the depletion of natural resources, are problems that will directly affect them.

She wants to show her students that their everyday choices can make a difference. Reusing their belongings, recycling, growing a garden, and using a refillable water bottle are some things teens can do, Bateman said.

Pope Francis' first encyclical is "very challenging to our way of life" in the United States, said Pope John Paul II High School theology teacher Catherine Vendetti. By addressing issues like water shortages, pollution and global inequality in stark terms, Pope Francis "rattles us up a little and calls for us to change our lifestyle."

When she teaches 11th-grade morality and social justice this year, Vendetti will discuss some of the topics in "Laudato Si'" with her students. She wants to challenge them to consider how much energy and water they use on a daily basis, compared to other, poorer countries.

"I think it will be a shock to them," said Vendetti, who has lived overseas in developing countries in the past.

Speaking in plain language in the encyclical, Pope Francis has made it clear that he's speaking to a universal audience. "This is not just the stuff of old, gray-haired men," she said.