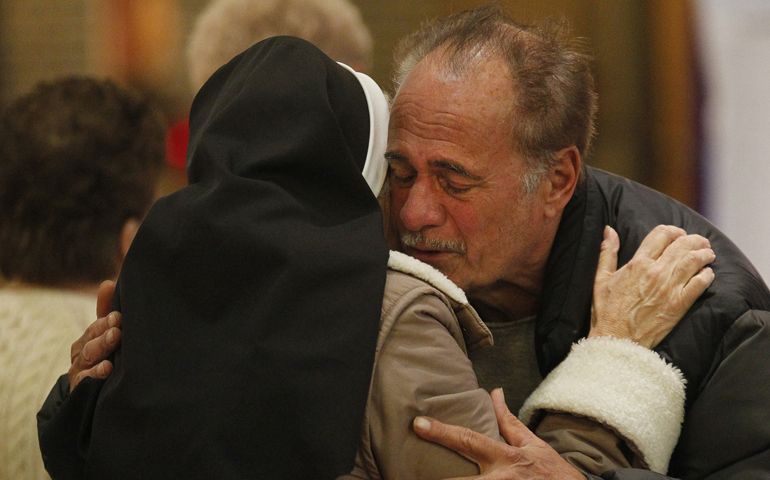 Dominican Sr. Jeanine Conlon embraces John Mennella following a Mass on Wednesday dedicated to people affected by Hurricane Sandy at St. Charles Church in New York's Staten Island. Mennella said he lost everything in his home during the monster storm that claimed the lives of three members of the parish. (CNS/Bob Roller)

Staten Island, N.Y. — St. Charles Catholic Church in Staten Island opened its doors to local residents who lost power during Hurricane Sandy, and to the families of three parishioners who lost their lives in that deadly storm.

John K. Filipowicz, 51, and his 20-year-old son, John C. Filipowicz, were found in an embrace after they drowned when floodwaters from the hurricane rushed their home.

A neighbor of the Filipowiczs and fellow St. Charles parishioner, Leonard Montalto, 53, also drowned in his Staten Island home the night Hurricane Sandy made landfall.

In the week following the storm, the funerals for all three of these parishioners were held at the church.

"It's a terrible blow to our parish," said Joan Paolino, a Staten Island resident who often meets fellow parishioners at the church before daily Mass to pray the rosary. "This hurricane devastated our community, but these deaths are a real tragedy. My heart breaks for their families."

Dominican Sr. Jeanine Conlon was well acquainted with the three men who died in the storm, but she had a special connection with John K. Filipowicz: She was one of his teachers when he attended St. Charles School in the 1960s and 1970s.

"He was a cute kid, he was a great guy," said Conlon, a pastoral associate at the Church of St. Charles. "As an adult I used to see him here. Funny guy, funny, funny fellow. A Marine. A strong, solid man, he came to Mass every Sunday. He'd wave to me and I'd wave back. A good parishioner."

The sadness of the St. Charles community was evident during the Monday funeral of the Filipowicz men and in preparation for the Montalto service Thursday, the Dominican sister told Catholic News Service, as she talked about how the parish had been impacted by the storm.

"There are 76 (St. Charles) school families displaced, that's a lot from one school," she said. "I'd say that is one fifth of our school."

During an 11:30 a.m. Mass on Wednesday, Fr. Antony Das S. Devadhasan told parishioners the storm may have caused despair among the faithful, but it can't rob them of their security, because God and their faith community would ultimately make sure they will be all right.

Following Mass, Devadhasan, Conlon and several parishioners comforted John Mennella, who became emotional when he talked about how his home sustained severe damage during the storm.

Conlon told him the people at his church would also help him. She also told CNS it's incumbent on the people of the community to come together and help each person in need during this extraordinary time.

Members of the church have already been collecting donations for storm victims and have organized other relief efforts, but Conlon said those efforts have to continue until people are once again whole.

"This is not going to be a short-term help," she said. "I mean, we have to pray, that's a given. But, while you're praying you've got to work. If people are hungry, you can't just say, 'I'll pray for you.'

"Your work is your prayer, and your prayer is your work," Conlon said. "So, that's what you have to do."

The paradox of a pro-life church without paid parental leave