Slow and steady wins the family synod on sexuality issues 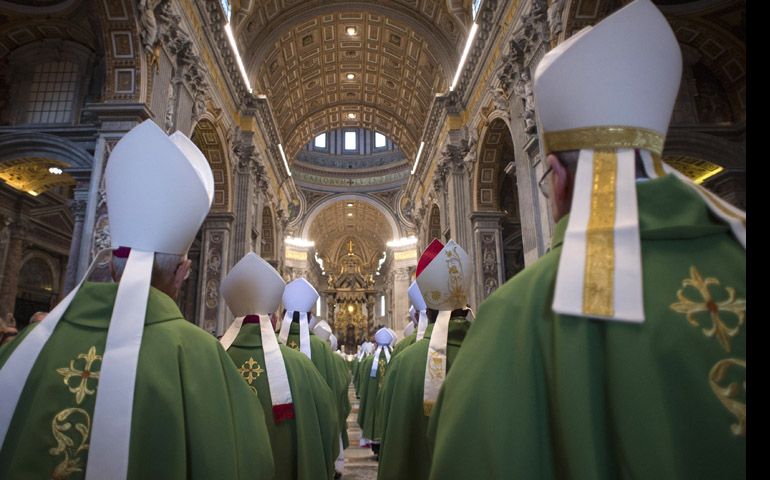 Bishops arrive in procession for the opening Mass of the Synod of Bishops on the family in St. Peter's Basilica at the Vatican Oct. 4. (CNS photo/L'Osservatore Romano, handout)
This article appears in the Family Synod 2015 feature series. View the full series.

Minneapolis — The Synod of Bishops on the Family is expected to result in some changes in church teaching on the touchy topic of sexuality, says Massimo Faggioli, associate professor of theology and director of the Institute for Catholicism and Citizenship at the University of St. Thomas, St. Paul, Minn.

Faggioli predicts the synod may move the dial on allowing divorced and remarried Catholics to participate in Communion and on welcoming gay people and their families into the church more fully without going so far as to bless same-sex marriage. While he says not to expect any changes to the official teaching on contraception soon,* Faggioli says that Francis has already reinterpreted Humanae Vitae, so that the teaching is not a big problem for the pontificate.

That may in part be the result of unprecedented lay input into the synod process.

"Until Francis, the synod was basically a boring show. With Francis it’s not a show, he is really listening. He has a real agenda," said Faggioli, an Italian who spends part of each summer at the Vatican doing research.

About 125 people, mostly in their 60s, 70s and 80s, paid $25 each to sip wine and share appetizers at a St. Paul, Minn., country club listening to Faggioli and human rights lawyer Barbara Frey address the question, "Can Francis change the church’s approach to sexuality?"

They spoke at the invitation of the Council of the Baptized, a 21-member panel of local Catholics who meet regularly to discuss concerns of conscience. The council is affiliated with the Catholic Coalition for Church Reform.

The short answer to the question of the evening is yes, but not alone. And not on a dime.

Since the start of his papacy, Francis' overarching agenda has been pretty clear: to be a church of mercy and compassion. To give people the benefit of the doubt. To be attractive to people by focusing more on the mundane than the arcane.

Not that he's throwing out the book, but he may simply be more pragmatic than his predecessors about how the world works and what Catholics actually do.

Yet between the pope and his people are his bishops, who tend to avoid the near occasion of change.

That's especially true regarding matters of sex and family life, such as the use of birth control, welcoming gays into the church more wholeheartedly, and allowing divorced and remarried Catholics to take Communion even without having received an annulment.

"The idea of the pontificate of mercy is also about the healing of wounds," Faggioli said. "The most dangerous wound in the body of the church in this country is that mentality that there is no common ground between different cultures in the church especially on below–the-belt issues."

How did the American hierarchy get so far apart from the people?

American bishops seem to reflect a more conservative political ideology than the actual practices of their Catholic flock.

A new Pew Research survey of 5,122 US adults including 1,016 self-identified Catholics found that 76 percent approve of artificial birth control, 46 percent say gay marriage should be recognized, 66 percent say it’s acceptable for gay couples to raise children, about a quarter have been divorced, and 44 percent have lived with a romantic partner outside of marriage.

"I have never seen a church as divided as the U.S. church, which has become part of the cultural wars between the two political parties. Catholic church teaching is captive of that war," Faggioli said.

Mary Ellen Jordan, an organizer of the St. Paul event, believes the stonewall on changing church teaching could be a combination of institutional hubris along with fear on the part of the average priest to disagree.

"I think the church is afraid to change, to say they were wrong, number one," said Jordan, "I think most priests are afraid of speaking out. Privately they will tell you one thing, but they will not speak out."

She and other members of the Council of the Baptized wrote a position paper, "Toward a Healthy Christian Theology of Sexuality," and sent it to all synod participants and the local acting Archbishop Bernard Hebda who has agreed to meet with the group.

It's important to remember that the American church is only a small percentage of the global church but can have outsized influence on the natural discourse.

One example of undue American influence, says Faggioli, is mistranslation of portions of last year's interim synod report from Italian into English, such as where the original Italian verb said that the church should "welcome" but was changed into English as "provide for" gays.

"It’s not clear if you are in or out," says Faggioli. "What surprised me is they thought they could get away with it. That was ridiculous."

What’s disturbing to Frey is that the Holy See — the church’s state department — has essentially strong-armed its agenda in some ways that actually contradict Francis’ emphasis on mercy and justice and his human rights focus.

Frey directs the Human Rights Program at the University of Minnesota and has a long history of leadership, advocacy and research on international human rights.

The Holy See has "become the standard bearer of the natural family movement on behalf of non-Christian countries," including those that foster an extremely misogynist society, such as Iran and Libya, she said.

"That is a very troublesome development," Frey said. "While I fully respect any religion or individual to hold strong moral positions, the problem is even as you are condemning sexual violence against women and girls, and only giving [the] option of natural family planning, it is not relevant to lived experience of women and girls around the globe."

When it comes to birth control, Frey pulled no punches. In 2012, contraceptive use prevented 218 million unintended pregnancies in developing countries, and, in turn, averted 55 million unplanned births, 138 million abortions (of which 40 million are unsafe), 25 million miscarriages, and 118,000 maternal deaths.

Then there is the life-saving benefit of barrier methods such as condoms, which prevent or lessen exposure to HIV/AIDS — the leading cause of death for women worldwide between ages 15 and 44.

"When we talk about contraception, we are talking about life and death matters," Frey told the group.

Frey said she feels somewhat hopeful that the pope's encouragement of lay Catholics' being including women in the synod process may prompt changes.

Slow and steady wins the race

In the end, there is no guarantee the synod voters will allow lay perspectives to shift their attitudes. In the end, the bishops will still carry the most weight in the final output of the synod.

And it's key for Americans to remember that the U.S. church is only 6 or 7 percent of the global church, Faggioli said. "In one sense, in the conservative sense, there is risk of Americanizing an event of the universal church. The difficulty of the synod is finding a consensus that all people can live with — churches that are culturally very different.

"[Francis] can’t change policies by himself overnight. If he does, it is the end of the Catholic church," he said. "There is a fiction of absolute papal power. He does not have legal tools to force 5,000 bishops to do as he says."

Faggioli believes there is potential for a major institutional rift if the U.S. bishops and other hard-liners feel backed into a corner.

Instead, what's likely in coming years is the church’s longstanding way of changing doctrine will take effect: that is, to simply allow untenable topics to fade from view, Faggioli said.

"I think we can expect slow and marginal changes in the language and official teachings of the church on issues that for decades we were not allowed to talk about.

"No pope wants a schism his watch."

[Kris Berggren is a freelance writer based in Minneapolis-St. Paul, Minnesota.]

*The original sentence, which read "... he [Faggioli] believes any change to birth control rules is off the table," was changed to better reflect Faggioli's fuller thought on birth control teaching.

Synod ends where it began, in disagreement

Pope Francis does it again!

The church must face its own role in violence against women