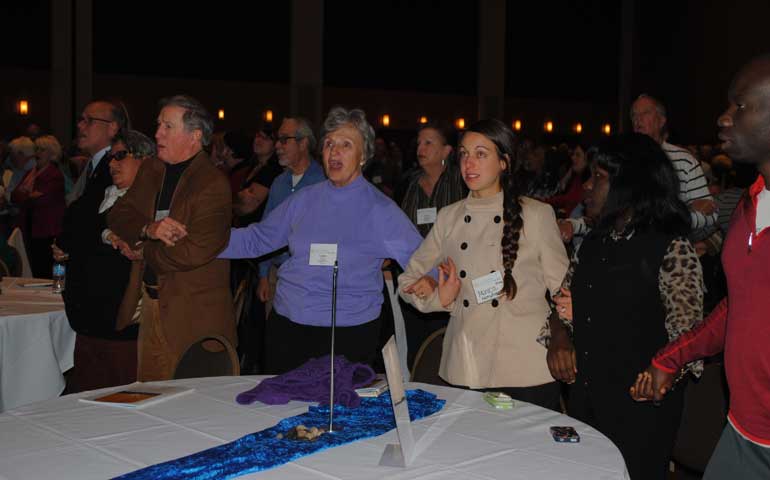 During the opening program of Call to Action's 2014 National Conference, audience members sing along with the LeMoyne-Owen College choir's performance of "We Shall Overcome" in Memphis, Tenn., Nov. 7.

Flannery drew such a large crowd for his Nov. 8 morning presentation that it had to be moved to a bigger space. CTA's conference, which ran Nov. 7-9, was the 11th spot on Flannery's 18-stop U.S. tour, sponsored by 12 Catholic reform movements.

In 2012, the Vatican's Congregation for the Doctrine of the Faith ordered Flannery to publish a statement saying he accepted both that there will never be women priests in the church, and that he accepted all Catholic moral teachings, including those against contraception and homosexuality. Flannery refused, and was forbidden to practice as a priest.

"I'm getting an extraordinarily broad picture of the church in the United States, and of the sort of issues that are relevant here, and the reform movements and how they operate," Flannery said in an interview with NCR Nov. 7. Flannery said his experience would be useful in Ireland, where Catholics are also dealing with parish closings and decline in priestly numbers.

Flannery considered this a critical time in the church, referencing Pope Francis and the recent Synod of Bishops on the family. The way the synod was conducted, Flannery said, showed that Francis is incorporating the spirit of the Second Vatican Council. "He's calling for people's voices to be heard, and he wants to know what people are thinking at all levels in the church," Flannery said.

During the tour, he observed "extraordinarily negative and damaging" impact of the attitudes of "culture warriors," bishops who have taken strong traditional stands in their dioceses. He said people in such dioceses seem much more frustrated than those in other dioceses.

"At a time when the pope is saying we should all be discussing these issues and making our voices heard, they feel that they're faced with a brick wall of a bishop or archbishop who's just not willing to listen to them at all. And the disconnect between the people and the bishop is enormous in some of these dioceses in America," Flannery said.

His message for American Catholics "is to realize the enormous significance of the time that we are living in, and to come together, organize themselves and strategically make their voices heard, so that the decisions that will be made in 12 months' time [at the next synod on the family] will reflect the real life experience of people," he said.

"It's terribly important that all people in authority in the church hear the voices of the sort of people who are gathered here this weekend, the reform-minded people," Flannery added.

With his presentations at the Call to Action conference, Flannery said, he's trying to "do my little bit" to energize and motivate people to continue their struggle to reform the church.

"If the church continues along the path that it has been for the past 20 or 30 years ... it will actually end up being a small, traditional sect," he said. "Whereas now ... there is an openness and a chance to really renew and re-energize the church. By God, that's a great chance."

Flannery participated in three conference presentations Nov. 8, all followed by lengthy Q-and-A sessions. The first topic was on the church and women; he highlighted women mystics and discussed how men have warped the depiction of women by minimizing their significance, such as their role in the life of Jesus. The second presentation focused on the church in Ireland. And in a late-afternoon four-panel discussion, Flannery -- along with FutureChurch executive director Deborah Rose-Milavec, St. Joseph Sr. Christine Schenk and Fr. Gerry Bechard -- discussed examples of laypeople working with priests to push church reform.

Flannery's presentations were among dozens that took place during the conference. Former President Jimmy Carter gave a video welcome to Call to Action members during the opening program Nov. 7.

Carter said that attendees faced "a church that models our society in marginalizing many of its women, its people of color and, in fact, all those who question any interpretation by male leaders of Jesus' mission."

"I urge you to give witness to the possibilities that society will change. You are agents of that change. And I stand with you in the valued struggle to move our faith, our country and our planet forward," Carter said.

"People have to get angry before they'll create change," Kennedy said. "That's something to harness and use as a positive force for change."

"From my perspective, there is no way to struggle for justice, except through the practice, the theory, the action, the sacrifice and the vision of nonviolent struggle," Lawson said. He emphasized Mahatma Gandhi's true definition of nonviolence. "Gandhi didn't mean antiviolence. Gandhi ... coined the term to mean love in action," Lawson said.

Call to Action presented its final keynote speaker, theologian St. Joseph Sr. Elizabeth Johnson, with its 2014 Leadership Award Nov. 9. Johnson reflected about "the natural world now being ruined, ecologically ravaged," by human behavior, and what that means in a religious framework.

A version of this story appeared in the Nov 21-Dec 4, 2014 print issue under the headline: Censured priest, Carter support CTA.