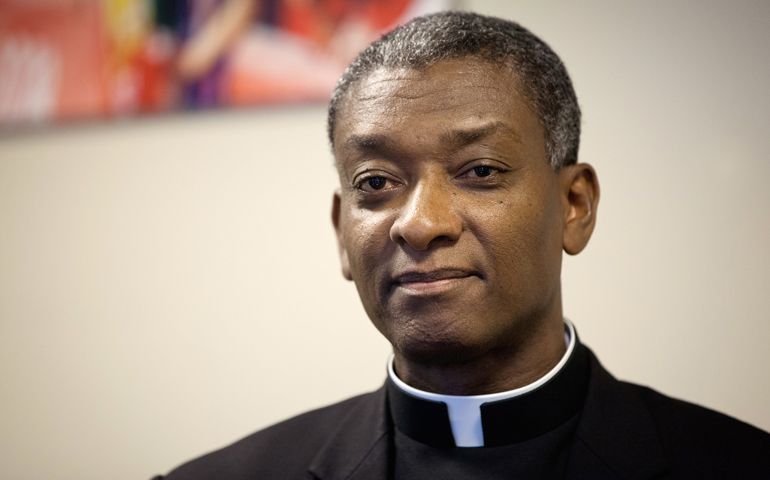 Santo Domingo, Dominican Republic — Haiti's new cardinal is known as a tireless worker, an advocate for the people and someone who never forgot his impoverished childhood.

Haitian Catholic leaders see the choice seen as recognition of the church's work following a devastating earthquake that struck four years ago to the day of the papal announcement. The quake killed an estimated 220,000 people and left 1.5 million homeless. It killed the archbishop of the capital, Port-au-Prince, and toppled the city's iconic cathedral.

People who know Langlois told Catholic News Service that he worked tirelessly after the January 2010 earthquake and that he represents the face of new Haitian church dedicated to working with the country's most vulnerable residents.

"This is historic news for Haiti. It's recognition of the work the church has been undertaking with the people in very difficult circumstances since the 2010 earthquake," Msgr. Wilnes Tilus, general manager of Caritas in Les Cayes, told Catholic News Service in a phone interview. "Bishop Langlois has been dedicated to working with the people, and the pope recognized that."

Since the earthquake, Langlois has advocated for the church to take a leading role in providing schooling for impoverished children, said Fr. Jean Herve Francois, pastor at the Our Lady of Lourdes Parish in Laborde, just north of Les Cayes.

"He has dedicated himself to creating opportunities for the youth and to the importance of education," Francois told Catholic News Service in a telephone interview. "He clearly has a touch with ordinary people."

The news that Langlois was among the 19 new cardinals who will be elevated in a consistory at the Vatican Feb. 22 also brought praise from the United States.

"The appointment of Cardinal Chibly Langlois, the youngest of those named, will bring much-needed attention to Haiti and the plight of its people who still struggle to recover from the aftermath of the earthquake as well from the endemic poverty of this island nation of some 9 million people," Miami Archbishop Thomas Wenski said in a statement.

In a country where the church has been marked by its involvement in politics, the naming of Langlois was seen as acknowledgment of the church's work, rather than its politics.

Haiti's political struggles have been marked by the Duvalier family regime, a father-son dictatorship that lasted three decades before Jean-Claude Duvalier was overthrown in 1986. Political instability followed, including the tenure of President Jean-Bertrand Aristide, a popular former Salesian priest who was twice removed in coups.

Alexander called Langlois the "head of a young church" seeking a new direction.

Langlois was not immediately available for comment on his appointment.

Born in La Vallee in southeast Haiti, Langlois was raised in a poor family, which influenced his work in the church, Francois said.

"He has not forgotten the fact that he came from poverty," he said. "That has been an important factor that has been a factor in how he has approached his work."

Langlois entered Port-au-Prince's major seminary in 1985. Six years later, he was ordained. In 2004, Blessed Pope John Paul II appointed him bishop of Fort-Liberte, the most northeastern area of the country, near the border with the Dominican Republic.

"He was tireless in his work with the youth and for better opportunities for children in Fort-Liberte," Tilus said.

Langlois was appointed bishop in Les Cayes in 2011, the same year he took over as president of the bishops' conference.

Cupich: Catholics are not scandalized by Pope Francis

Pope’s quotes: Go beyond the ordinary