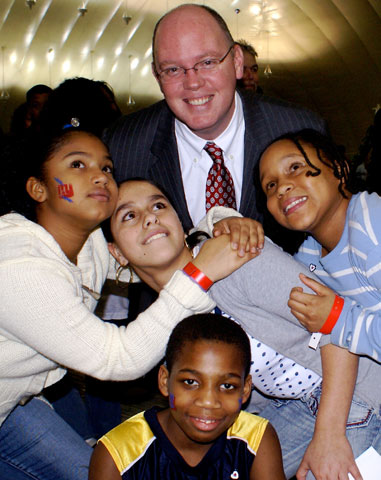 Kevin Ryan is president of Covenant House, which serves homeless and runaway kids between the ages of 17 and 22 in 15 U.S. cities and six countries. With Tina Kelley, who was a New York Times staff writer for 10 years, he has authored a new book titled Almost Home: Helping Kids Move From Homelessness to Hope. Ryan recently spoke with NCR about the new book and the work of Covenant House.

NCR: At the heart of the book are six homeless youth -- Paulie, Muriel, Benjamin, Creionna, Keith and Meagan -- whose lives are filled with extraordinary hardship, abuse and despondency. What is your aim in breaking open their remarkable lives for the reader?

Ryan: As I got to know these young people over the last three years, I was gripped by their climb out of darkness. I was struck by their resilience, by their ability to put the sadness and violence of their childhoods behind them and to defy just about everyone's expectations of them, against huge odds. Their lives inspired me.

Take Benjamin, for example. His life was a puzzle to me. How does a kid face down physical torture from a mother who deformed his hands with boiling water, bounce through 35 loveless foster care placements, endure bouts of violence and abuse, but still believe in love, still find an enduring faith and go on to become a college football player? The truth is, these transformations don't happen in isolation. I was struck by the acts of kindness from total strangers who helped lift these kids off the streets and out of homelessness.

Paulie suffered terrible physical and emotional abuse at home, eventual homelessness and drug abuse. Yet, after more than eight stays at Covenant House Alaska, Paulie begins a remarkable transformation. Covenant House staff member Mildred Mack proved to be a pivotal influence in Paulie's life. What stands out for you in Paulie's story?

He hated [Mildred] for a long while. Paulie was homeless for most of his teen years and he just hated Mildred because she wouldn't tolerate all the excuses he created for himself to use drugs, avoid school and surf the streets. Mildred had no time for Paulie's self-pity. This kid had been abandoned by his family and savagely beaten. It was enough to make just about everyone feel sorry for him. But Mildred understood Paulie better than most others. Pitying a homeless young person so much that we stop expecting anything of them is its own form of abandonment. Her own life was coming apart at the time -- her husband left her and she had two children to raise. But she didn't give up on Paulie. One of my favorite moments in the book is when Paulie is dragging his feet getting the paperwork needed to enroll in school. He complains that she is overbearing and he needs a break. And Mildred replies, "Covenant House is your break."

Muriel's story is stunning. She became addicted to drugs at 12, suffered depression and then homelessness. By the time she was 19, three different pimps were selling her body over the Internet. Muriel had the good fortune to meet Charity Sr. Nancy Brown at Covenant House Vancouver.

Sister Nancy has taken on some of the most violent trafficking rings in Canada. We can't forget there are thousands of religious women like her -- spitfires, humanitarians, icons of Christ's love in the world. They are among the very best of the church today, lifting Christ's message of hope from the pews to the pavement.

Sister Nancy believed in Muriel, kept urging her to get off the drugs, to leave the loveless, self-absorbed johns behind. She threw her a life raft. Well, she had to throw it a few times, but eventually Muriel grabbed it.

Sister Nancy is pushing Canada to improve its anti-trafficking laws. The Swedish legal system actively prosecutes and punishes johns; offenders can face fines based on their income, and a john can go to jail if they buy someone through organized prostitution. It seems to be working. In the law's first year, arrests increased 300 percent. Now, fewer johns are trying to buy sex, the number of women working on the streets has decreased up to 50 percent, recruitment has nearly stopped, and the estimated number of women in prostitution dropped from 2,500 to 1,500 in three years. North America has been slower to understand that children who sell their bodies for the financial gain of others and anyone forced into prostitution are trafficking victims. In the United States, we too often arrest a prostituted person without assessing whether she or he is being coerced or is in physical danger.

You write that Benjamin lived in the "parentless netherworld, removed from his birth family and not connected to other kin or a loving adoptive family." Did Covenant House become a family to him? Is that what you want Covenant House to be for homeless young people?

Absolutely. Covenant House has to be love in the world. ... From the moment a young person comes through our doors our goal is to be the absolute respect and unconditional love that all kids need and deserve.

That is why we try to make the house feel as much like home as a shelter possibly can. We sit down as a family for meals. We celebrate birthdays, holidays. We celebrate the individual accomplishments of our kids -- first jobs, first apartments. We team our kids up with volunteer mentors, who become part of their family as well.

What should the federal and state governments do legislatively to address the issue of aging out of foster care?

Government is never going to love a child the way a family must, so the first order of business is stronger families. But for kids who get ensnared in the foster care system, especially teenagers, we have to do a better job of connecting them with a forever family, either safely reuniting them with their own kin or helping them find a new family. The country needs more extraordinary families to foster and adopt children who have been abandoned. Eleven percent of the children leaving foster care age out of the system with no place to go. That's nearly 28,000 teenagers a year. ...

Some initiatives have been helping. Wendy's Wonderful Kids, a program of the Dave Thomas Foundation for Adoption, awards grants to public and private adoption agencies to hire adoption professionals to recruit adoptive families aggressively, and has paved the way for almost 3,000 adoptions in the United States. In New Jersey in 2007, the child welfare system I led devoted its most experienced staff members to find permanent homes for the 100 foster children who had been waiting the longest. We placed half of the children within 18 months, so youth who had waited as long as 12 years were finally connected to families. In St. Louis, a program called Extreme Recruitment has used retired detectives and child welfare workers to locate dozens of relatives for young people stuck in foster care, finding permanent homes for 70 percent of them, compared to 40 percent under standard procedures.

Young moms and babies come to us with no place to take care of themselves and their children. Often they have been thrown out of their own homes and find themselves on the streets, with no job, no money and nowhere to turn. Worse yet, they often have no idea how to be good parents.

Our New Orleans shelter helps young mothers by providing Head Start classes that allow enrollment year-round, which is ideal for transient young parents. Our Orlando [Fla.] shelter uses the Nurturing Touch curriculum, including infant massage, to stimulate healthy development and a strong attachment between mother and child. Our Fort Lauderdale [Fla.] shelter staff work closely with the Healthy Start Coalition of Broward County, with two staff members instructing pregnant and parenting young people in proper prenatal care, breastfeeding, parenting techniques, and how to take care of themselves as well.

On a typical day, after breakfast many of the mothers leave for work at full-time jobs. Others work toward their high school equivalency diplomas. Some take workshops in resumé writing, job search and interviewing skills. While mothers are working or learning, our nursery staff and volunteers care for their children and assess their developmental, emotional and social needs. When the mothers return, they attend classes in health care, nutrition and positive discipline, learning the skills so critical to good parenting. We want to be the bridge for young mothers from poverty to opportunity, but crossing that bridge with an infant in tow is daunting.

How vital are one-on-one relationships, mentors, for homeless teens?

At Covenant House, we're only as effective as what goes on face to face between our kids and our staff. Once a kid decides to stay with us, our staff begins the hard, day-to-day work of building a plan for the future with each young person. Sometimes the result is the absolute heartache of losing a kid back to the street. I've been to my share of funerals -- believe me, it's grueling. But more times than not, the result is the rebirth of a young life that society had long left for dead.

Your last profile is of Meagan, a gay teen who was rejected by her own family because of her sexual orientation and kicked out to the streets. You point out that sexual minority youth become homeless at a disproportionately high rate and that each year some 240,000 to 400,000 lesbian, gay, bisexual or transgender youth become homeless. Moreover, some 60 percent of sexual minority homeless youth attempt suicide at least once, twice the rate of straight homeless youth. What is Covenant House's approach to caring for LGBT youth?

We are each made in the image and likeness of a loving God. Many sexual minority youth come to us feeling broken and defective. Their heads are filled with messages of hate and rejection. They are alone on the streets, sometimes desperate for food and shelter. We have to remind them over and over again that they are beautiful in our eyes and in the eyes of God. For some kids, it's like speaking a different language to them because they haven't heard anything positive about themselves.

If this book does nothing else, I hope it shows the goodness, the courage, the beauty that lives within each of these kids. And I hope that by telling these stories, we can introduce people to our kids and our mission, and show people we can change the world, one bold kindness at a time.

[Tom Gallagher writes the Mission Management column and can be contacted at tom@tomgallagheronline.com.]