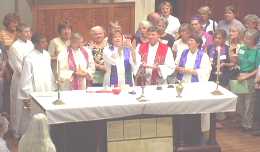 Altar scene from Pink Smoke over the Vatican

The Pope told the Scottish people in his homily at Bellahouston Park on Sept. 16, that "Just as the Eucharist makes the Church, so the priesthood is central to the life of the Church."

That same week, the Women's Ordination Conference (WOC) celebrated its 35th anniversary --- 35 years of witnessing to the Church that there is no need for ordinations to be declining worldwide because there is no shortage of vocations to the priesthood among women.

As part of its anniversary celebration in Chicago on Sept. 18, 2010, WOC had the first public showing of "Pink Smoke Over the Vatican," a one-hour documentary on the women priest movement made by Jules Hart for her company, Eyegoddess Films.

Hart, who is not Catholic, said she was moved to make this film after she met some of the women priests and their supporters because "it is not every day that you meet people who give up everything for what they believe in."

The story of the first modern woman priest, the Czech woman Ludmila Javorova, is also told by Sister Miriam Therese Winter, who presented Ludmila to the world in Winter's 2001 book, "Out of the Depths."

Father Roy Bourgeois's observations on the women priest movement and the sacrifices he made for supporting it are a uniting commentary throughout the film.

The film is dedicated to the late Don Cordero, who also speaks in the film as a former Jesuit and husband of one of the womenpriests. Scenes from the various recent ordinations of women provide a visual richness to the film

The personal stories and observations of the women priests are moving. Until she was ordered to recant or leave the Order, Bishop Patricia Fresen was a Dominican nun for 45 years in South Africa, where she fought apartheid and was briefly jailed for running a school with both black and white girls as students. Her decision to be ordained was inspired by this experience, which taught her that, if an unjust law cannot be changed, it must be broken.

Victoria Rue's testimony of being called to the priesthood as a young child is punctuated by old home movies showing her saying "Mass" for her friends using Necco wafers for communion, a childhood experience familiar to many Catholic women.

Ludmila Javorova was ordained to minister to women prisoners by Bishop Felix Davidek who himself had been imprisoned by the Communists for 16 years. Yet, the Vatican's response when they learned about Ludmila's ordination years later was to say that Davidek had been insane.

Janice Sevré-Duszynska prostrated herself in a white alb before her bishop during an ordination in 1998, telling him that she came before him in the name of Sarah, Hannah, Elizabeth, and the woman who touched the hem of Jesus's garment to ask the bishop to ordain her along with the male candidate.

Alta Jacko, the first African-American woman ordained in RCWP, recounts the inspiration she received from Harriet Tubman and Sojourner Truth to take this step. Bishop Bridget Mary Meehan's statement, "My faith is in my DNA," captures the reason all these women choose ordination as women priests but do not leave the Church whose hierarchy has rejected their vocation.

The official position of the hierarchy on women's ordination is presented in interviews with Father Ronald Lengwin, the spokesperson for the Pittsburgh diocese.

Pink Smoke will be shown again at the annual Call to Action meeting in Milwaukee on Nov. 6 and during the annual School of the Americas march in Columbus Georgia the same month. A DVD will then be available for purchase for $20 from Jules Hart at www.eyegoddess.com.

[Marjorie Reiley Maguire is a Catholic theologian and attorney in Milwaukee, WI.]