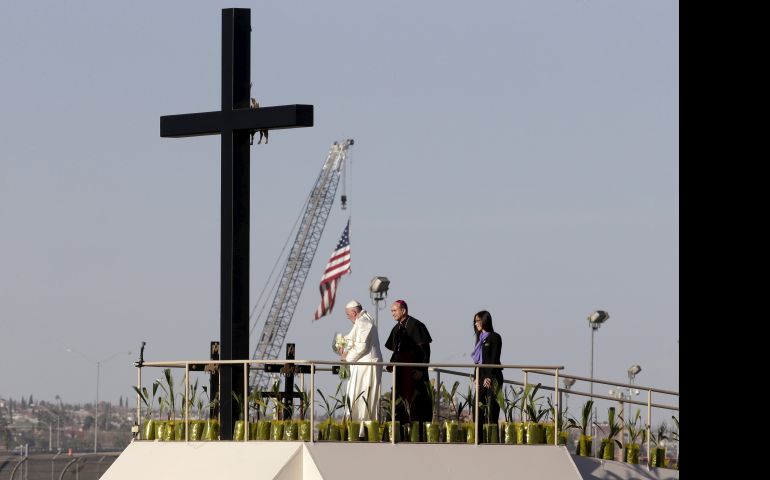 Pope Francis places flowers at a wooden cross at the border between Mexico and the U.S. in Ciudad Juarez, Mexico, Feb. 17. (CNS/Reuters/Max Rossi)
This article appears in the Francis in Mexico feature series. View the full series.

Aboard the papal plane from Mexico — Pope Francis has questioned U.S. Republican presidential frontrunner Donald Trump's Christianity, saying that his plan to build a wall across the entire Mexican border has no basis in the Gospel.

In a press conference aboard the papal flight to Rome following his six-day trip to Mexico, the pontiff was asked to respond to Trump's allegation last week that his decision to celebrate Mass in Ciudad Juarez near the border made him a political pawn of the Mexican state.

"Thank God that he said I am political because Aristotle defines the human person as animal politicus (political animal)," the pope quipped. "At least I am human!"

"A person who thinks only about building walls, wherever they may be, and not building bridges is not Christian," said the pontiff. "This is not in the Gospel."

Francis was asked in the press conference for his reaction to Trump's proposal of a border wall, and what he might say to U.S. Catholics supporting Trump. The pope said he was "not going to get involved" in giving advice about voting.

"I'll only say that this man is not Christian if he says this," said the pontiff. "We have to see if he said these things. And ... I give the benefit of the doubt."

Francis was speaking Wednesday in an hour-long press conference aboard the papal plane travelling home from Mexico, where he visited six cities in six days. The pope spoke as the plane flew over Texas and other parts of the southern U.S.

On his last day in Mexico, Francis celebrated a richly symbolic Mass less than a football field's length away from the southern side of the U.S.-Mexico border, where he pleaded for mercy and conversion of hearts towards migrants.

Last week, Trump told Fox Business Network that he did not believe Francis understood what he called "the danger of the open border we have with Mexico" and suggested the pontiff was being used politically by the U.S.' southern neighbor.

Trump responded to Francis' comments on the papal plane with a three paragraph statement in which he claimed the Vatican would be attacked by the so-called Islamic State and said: "For a religious leader to question a person’s faith is disgraceful."​*

Francis response to the presidential frontrunner was only one part of a press conference that touched on a wide range of other subjects, including: Whether the Catholic church should change its ban on contraception because of the Zika virus, treatment of bishops who inappropriately handle clergy sexual abuse, and the pope's impressions of Mexico.

Francis spoke about bishops who inappropriately handle clergy sexual abuse in relation to a question about Marcial Maciel Degollado, the disgraced founder of the Legionaries of Christ who raped boys with impunity for decades.

The pontiff was asked what should be done to bishops who move abusive priests from parish to parish instead of alerting authorities.

"A bishop who changes a priest of a parish when a case of pedophilia is discovered is a man without a conscience and the best thing he can do is to present his resignation," said the pope. "Is that clear?"

Francis was also asked his opinion on a bill in the Italian Parliament that would legalize same-sex unions in the country.

"The pope cannot get mixed up into Italian politics," he responded. "The pope is for everybody and he cannot insert himself in the specific internal politics of a country. This is not the role of the pope, right?"

"What I think is what the church thinks and has said so often, because this is not the first country to have this experience," he continued. "I think what the church has always said about this."

The pontiff also told the press he would not be attending the landmark Pan-Orthodox Synod in June. The Synod, being held in Crete, is the first such gathering of the many Orthodox churches since the ninth century.

"I will be present spiritually," said Francis. "I would like to go greet them ... they are brothers. But I must respect them."

"Behind the Catholic observers I will be praying with my best wishes that the Orthodox move ahead because they are brothers," he said. "Their bishops are bishops like us."

Francis ended the press conference with a reflection on his time in Mexico.

"I would like to say something about the Mexican people," said the pontiff. "It is a population that has a wealth, such great wealth, a people that surprises."

The pope also revealed some of what he prayed for on Saturday when he visited the Basilica of Our Lady of Guadalupe, the church which houses the famous image of the Mexican apparition of Mary.

"I asked for the world, for peace," said Francis.

"I asked pardon," he said. "I asked that the church grows healthily. I asked for the Mexican people."

"And also something I've asked many times," he continued. "That priests may be true priests, sisters true sisters, bishops true bishops as the Lord wants. I've asked this many times."

*This story has been updated to include a response from Donald Trump.

At US border, Francis pleas for mercy, conversion toward migrants

Looking for a true Latino in the presidential race