Salvadoran town finds a space for healing in art center 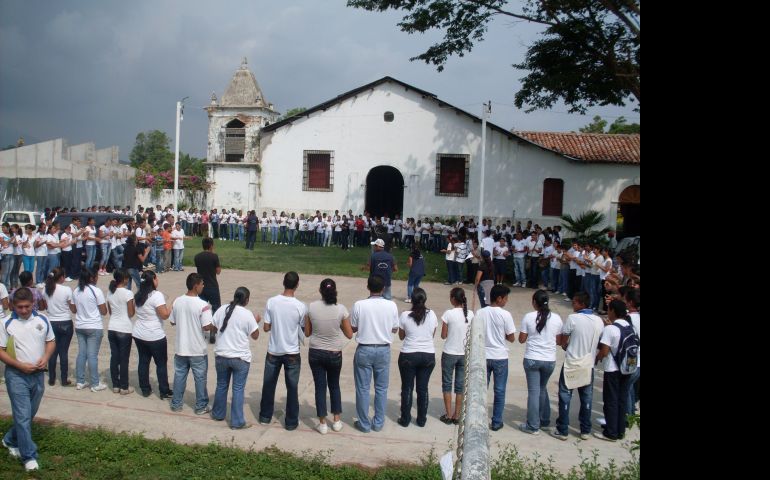 The tiny town of Suchitoto, El Salvador, is made up of 82 rural communities and an urban center, a cobblestoned town filled with colonial architecture. It is also the birthplace of the seven-year-old Centro Arte para la Paz (Art Center for Peace). The Centro began when two U.S. women religious living in El Salvador -- Charity Sr. Peggy O'Neill and Franciscan Sr. Pat Farrell -- came across an abandoned, war-torn building built in 1840, and saw its potential.

El Salvador continues to rank among the most violent countries in the world, and peace-building work is ever vital. In 2011 alone, nearly 33,000 people visited the a Centro. NCR recently spoke with O'Neill, New Jersey native who for the past 55 years has been a Sister of Charity, and for the past 25 a Suchitoto resident.

NCR: Can you tell me about the history and present work of the Centro Arte para la Paz?

O'Neill: This is healing space. ... We set out with a passion to use this place to build a culture of peace in Suchitoto, where we survived a war with all its trauma and fear, knowing how heinous it is and how long healing takes.

We offer classes and programs on alternatives to violence, art classes, a community museum. We also run a hostel and apartments for our visiting volunteer teachers, and the money we raise through that supports the classes and programs, which are free because our local youth couldn't pay for them. The rest happens through grant-writing, volunteers and donations. We have purchased the building, and we have formed an ownership association made up of only Suchitoto locals.

This place is a physical sign of hope: It was abandoned for 25 years, and now the ruins are restored, the gardens are blooming, the facilities are full of activities. And the community handles it with care. Young people do not mar this place -- there is no graffiti here. ...

It's widening the community members' horizons, giving them self-esteem, challenging in every way, whether we're doing classes on photography or music or yoga. It's teaching peace within, and peace in community. ... We're not only dealing with violence left over from the war, [but] also the violence that's presently challenging youth -- gangs, immigration, etc. So we also seek to give the young people marketable skills, through projects like a community museum that has taught them research, graphic design and knowing their own story. ...

What has been the significance of the presence in Suchitoto of the Catholic nuns from the U.S.?

What really made the women's movement gel here was the church, because we had Catholic sisters who were in the feminist model already, and we realized that [local] women were ready. ... The sisters would call women's meetings in the church, and husbands would let them go because it was a religious thing. We were talking with the women about the pain of burying their children, about abuse, about the fact that women didn't have rights to own land or animals.

We began to talk about God in new ways, about Mary as a strong woman, about how motherly God was to us, to ask questions like, "Why have we never had a church with a big image of Mary nursing?" That's a truly a eucharistic symbol. Isn't that what Jesus wanted -- to satisfy our deepest hunger always? We began to discuss these new things with unschooled but truly wide-awake women, who were longing. ...

I want to emphasize what a privilege it was for us sisters to walk alongside the people during the war. The people took away our fear. We learned a sense of communal hope from them. We learned to lean into the scriptures differently. During this time, we too had to say, "From whence do I draw my strength?" We cast our lot with them, and we drew our strength from them. None of us sisters could have done it alone here.

The same was true about each other. We cast our lot with each other, as sisters, and drew our strength from each other. We were lucky because we had a double community -- the women of Suchitoto, and each other. I'm so grateful for my order. I've never wanted to be more than a sister to anybody, and I first learned that by belonging to a community of women that call themselves sisters. And even now, we're intimately connected, even from far away. Sometimes it's hard, because I miss out on big life events and meetings, being so far away. But I can only be here because of the sisters back home -- their support financially, spiritually. They support my work at every step.

I believe so strongly in creativity because I think it's a wonderful metaphor for the "G word" -- for God. All of this creative impulse flaring forth -- that loving impulse to share -- from that, creation emerges. And when people create, when they say yo puedo ["I can"] -- sing a song, play a guitar, research my history -- that is empowering. ...

Can you talk about your relationship with El Salvador as someone who grew up in the United States?

I want to share what has grasped me, but it is always bigger than my words can convey. I mean, when you're served a plate that has rice, beans, toasted tortillas -- but it's shared out of somebody's substance, not their excess -- you are grasped by that gesture. And I think that people all over the world need to have more experiences of being grasped.

Right now, in the United States, we live under the myth of scarcity. ... We live under this notion that we don't have enough -- time, money -- we're convinced there's scarcity, and that really does keep us buying more, wanting more, having more. So we live under the impression that there isn't enough for everybody -- not enough oil, not enough food, not enough etc. -- and we know that 5 billion people -- billion with a "b" -- go to bed hungry every day. We know that. But we also know that there is enough food to feed the world twice over with just the grains that we have right now. But they want to keep us living under this myth, because it means we really don't change anything.

I really saw scarcity here. I watched a little boy eat the skin of a banana after he gave the banana fruit to an old man. I mean, I never knew you could eat the skin of a banana. So the question is: Why is there scarcity? The thing about this myth is that it covers up our perception of scandals. If I am not scandalized by the fact that there are 5 billion people going hungry, if I am not scandalized by the planned lack of education, or by the planned corruption in government or courts ... if I believe the myth, I won't act against the scandals. ...

What do you think keeps us from seeing the scandal?

Fear. Laziness. I can make a whole list. Individualism. Waking sleep. Protection, protecting my turf. ... We are afraid because most of us are comfortable, and we're afraid to lose our creature comforts. We don't want to wake up, because it will mean we must live differently. ...

There's got to be movements of people who actually engage in this "great turning" from empire to the power of Earth community. What we have to recognize again that everything is holy. Everything is sacred. We must pronounce this again: The land is sacred; you cannot rape it. Women are holy; they cannot be playthings during wartime. Human lives are holy; we can't make all the money we make from gun sales. Cultures are holy. So we can't say ours is better; we can only say, how do yours and mine match, how do they help each other grow?

| Salvadoran town finds a space for healing in art center