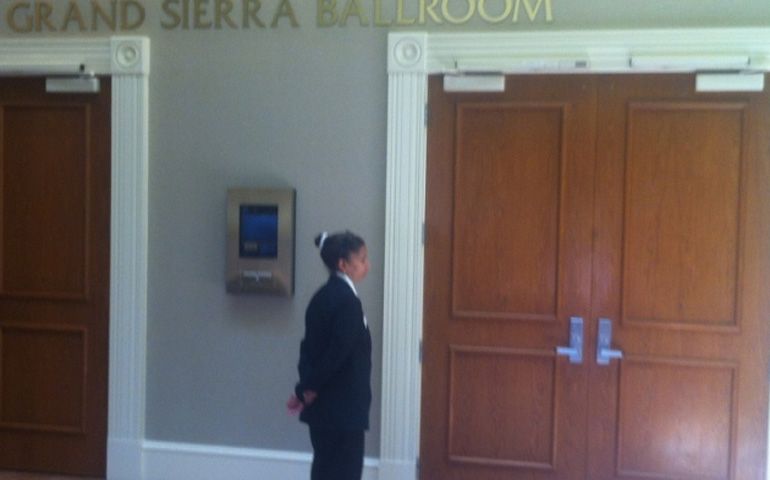 Orlando, Fla. — In his first address to representatives of U.S. Catholic sisters since his appointment in April 2012, the archbishop tasked by the Vatican to oversee their leadership group reportedly had little to offer regarding the reason for Vatican concern or how the process goes forward.

Leaving Thursday’s closed-door meeting between Seattle Archbishop J. Peter Sartain and the Leadership Conference of Women Religious (LCWR), several sisters said they felt frustration at the lack of detail given by the prelate nearly 19 months into his mandate.

Sartain met Thursday afternoon with some 825 LCWR members, who are representatives of orders of Catholic sisters around the country. The Vatican’s Congregation for the Doctrine of the Faith has named the prelate the group’s “apostolic delegate” and given him wide power to revise its statutes and programs.

LCWR members were asked by the group’s leaders not to discuss Thursday’s meetings with members of the press. The doors into the convention hall where Sartain was speaking were locked with uniformed guards placed near them to prevent unauthorized entry.

Several LCWR members, while not giving specifics of Sartain’s remarks or the questions asked of the archbishop, told NCR afterwards of their general feeling of the meeting. A few of the members expressed appreciation that Sartain spent time at their assembly; others said there was a general sense of frustration, fatigue, and disappointment with the direction of the afternoon.

“This is just more of the same,” said one. Another, asked to express a general feeling, would only make a so-so gesture with her hands.

One member said Sartain did not respond in any detailed way to questions about the specific allegations made in the Vatican doctrinal assessment of LCWR, preferring instead to talk about his general sense of the role of religious life in the church. Most of his talk, this person said, focused on Jesus.

At one point during his talk, one LCWR member said, Sartain told the sisters their role “is to be thinking with the church and fidelity to the magisterium of the church.”

Standing outside the assembly hall where Sartain was speaking Thursday, the prelate’s voice could be heard faintly for about 37 minutes. Afterwards, there was about a minute of clapping before voices of individual sisters could be heard intermittently until a scheduled break 90 minutes into the meeting.

According to an assembly member who had been in the hall, the prelate’s talk was followed by a brief pause during which the sisters, seated at more than 100 tables, came up with questions for the archbishop.

Each table was then invited to send a representative forward to ask questions, with Sartain answering questions selectively from six of the representatives at a time.

In all, the LCWR member said, Sartain fielded questions from about 50 women. While the archbishop listened, the member said, he rarely answered questions with specific details and spoke more generally about the role of religious life.

While Sartain and LCWR leaders have said they will not be talking to press during the assembly about their relationship, the archbishop had at least one meal with the sisters’ group’s board and was seen speaking in a friendly manner with a number of sisters over the past week.

Several LCWR members told NCR they felt torn between their leaders’ request for them to stay silent on the shape of discussions with Sartain and a desire to be open and transparent about the proceedings.

According to one member, common themes in the questions asked of Sartain by LCWR members Thursday included:

• Frustration of the sisters’ congregations on the slowness of receiving information regarding how Sartain’s role at LCWR would continue;
• A feeling that the reputation of U.S. sisters had been unfairly tarnished;
• Sharp disagreement with allegations by Vatican officials that LCWR does not adequately communicate with bishops in Rome.
To the last point, Sartain reportedly said that Vatican officials “going forward hope to have better communication with LCWR.”
“But that’s not on our part,” a sister reportedly replied, mentioning that LCWR leaders visit the Vatican congregations in Rome each year and extend invitations to bishops to attend its assemblies.
“That’s what we do,” the sister reportedly continued.
To the second point, one sister reportedly told Sartain that the Vatican had “without question … done injustice to our reputation.”
On his part, one sister said, the archbishop began his remarks by saying he wanted to speak to the sisters “from the heart” and as their “brother and friend.”
Sartain, that sister said, also expressed support for the sisters’ various ministries, which include education, health care, and social justice advocacy.
“We support your ministries over all these years,” Sartain said, according to that sister. “There is no critique of your social mission.”
One suggestion Sartain made to LCWR in his remarks, one sister said, was to alter the way the group selects speakers for its annual assemblies. Instead of choosing only one speaker to address its members, Sartain suggested they select respondents as well, including at least one who would put in a positive light the official teachings of the church.
Sartain’s address to LCWR came on the third day of the group’s annual assembly, which is being held in Orlando through Friday evening. LCWR represents about 80 percent of the some 57,000 U.S. sisters.
Leaders of LCWR and the individual institutes of U.S. sisters have long expressed pain and confusion over the Vatican's move against their group, made in a "doctrinal assessment" published by the Vatican congregation that gave Sartain a mandate of "up to five years, as deemed necessary” to revise the group.
Before Sartain’s talk Thursday, LCWR leaders hosted an earlier three-hour closed-door meeting with their members. According to several sisters, that meeting was the first opportunity of this year’s assembly for LCWR members to ask the organization’s three presidents how discussions with Sartain over the mandate have been going since April 2012.
Meetings between Sartain and LCWR leaders in the 18 months since publishing of the mandate have taken place outside public scrutiny, and neither Sartain nor the sisters have publicly detailed the number or content of their meetings.
According to knowledgable sources, LCWR members were told Thursday that their leadership had met with Sartain four times over the past year: Once following last year’s LCWR assembly in St. Louis, once in November in Baltimore during the annual U.S. bishops’ meeting, once in May during the group’s annual visit to Rome, and once more this summer.
Each time, the LCWR leaders told their members Thursday, Sartain did not detail the Vatican’s specific concerns with LCWR.
In their first meeting last August, Sartain also reportedly said he had not been sufficiently educated on the renewal of religious life that followed the Second Vatican Council (1962-65). Those renewal efforts, which lasted for decades, are widely viewed by women religious as momentous achievements.
In their closed session with members Thursday, the LCWR board also shared a report of its May meeting in Rome with members of the Congregation for the Doctrine of the Faith. Several sisters said they were told that the LCWR’s response to the doctrinal assessment had contained “deficiencies,” but these were not spelled out.
When meeting in the closed-door session with Sartain Thursday, several sisters reportedly asked the archbishop to spell out the alleged deficiencies, but he did not do so.
Following their meeting with Sartain Thursday, LCWR held another closed session at which it announced the results of its annual election for leadership of the group.
LCWR’s leadership is composed of a president-elect, president and past president, who govern group collaboratively. Each year at its annual assembly, the group elects a new president-elect, who transitions to the role of president the following year.
According to several sisters, Immaculate Heart of Mary Sr. Sharon Holland was elected as the group’s new president-elect.
A noted canon lawyer, Holland previously worked for 21 years at the Vatican as a staff member of the Congregation for Religious and was considered one of the highest ranking women in the church’s command structure.
LCWR’s current president is Franciscan Sr. Florence Deacon. Following an address to the group’s members Friday, Deacon will become the group’s past-president as St. Joseph Sr. Carol Zinn, elected as president-elect at last year’s assembly, becomes president.
LCWR leaders have not said when or whether they will give details of Thursday’s meeting with Sartain. Members of the group's board are to meet at an area retreat center over the weekend to continue deliberations on the mandate.
Some LCWR members have said there is a plan to release a statement following the weekend meeting, but others said no decision has yet been made on that matter.
[Joshua J. McElwee is NCR national correspondent. His email address is jmcelwee@ncronline.org. Follow him on Twitter: @joshjmac.]

LCWR meets with Vatican overseer under lock, with guards

Vatican overseer preaches to LCWR on Mary's submission to God