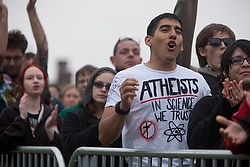 Alberto Valdez from Del Rio, Texas, joins others March 24 for the Reason Rally, a gathering of atheists and nonbelievers held on the National Mall in Washington. (CNS/Religion News Service/Tyrone Turner)

The pride she has in her atheist status is part of what inspired her to travel from the Philadelphia area, where she is enrolled at Villanova University, to Washington in March to join thousands of other atheists, agnostics and other nonbelievers for the "Reason Rally," an event that was billed as an assembly to unify secular people nationwide.

Carrying a sign that reads, "This is what an atheist looks like," Gasser is part of a growing segment of Americans under the age of 30 who identify themselves as atheists or agnostics.

It's a movement that concerns Catholic leaders worldwide, including Pope Benedict XVI.

"We have morals and we have beliefs and we have these values," said Gasser, as she walked along the National Mall and marveled at how many people turned out for the rally. "People just think that we're evil, God-hating. We're just people. We just don't believe that something happens to us after we die."

A survey released in 2009 by the Pew Research Center found that a quarter of Americans between the ages of 18 and 29 surveyed said they were atheists, agnostics or had no religion.

"Radical secularism" threatens the core values of American culture, the pope warned a group of U.S. bishops visiting the Vatican in January. He called on the church in the U.S., as well as politicians and other laypeople, to render "public moral witness" on crucial social issues.

"The larger concern with secularism is that it damages people, and that it actually keeps people from being reasonable with one another," said Chad C. Pecknold, assistant professor of systematic theology in the School of Theology and Religious Studies at The Catholic University of America in Washington.

"It creates a great level of intolerance for people of faith. I think secularism for Pope Benedict is a feature of this growing bifurcation between faith and reason," he told Catholic News Service.

Pecknold, who also is the author of the 2010 book "Christianity and Politics: A Brief Guide to the History," said secularism is a greater threat to humanity than to the Catholic Church because it could lead to great social unrest and fragmentation.

Vilification of Muslims in the United States following the 9/11 terrorist attacks in New York, Washington and Pennsylvania can be viewed as an example of secularists' intolerance.

Richard Dawkins, vice president of the British Humanist Association and author of the 2006 book "The God Delusion," was quoted as saying religion is dangerous "because it gives people unshakeable confidence in their own righteousness. Dangerous because it gives them false courage to kill themselves, which automatically removes normal barriers to killing others."

His remarks are an illustration of hostilities toward people of faith, Pecknold said.

"These are all examples of an attempt to cause civil unrest, which I don't think are sustainable," he said. "It could actually lead to greater and greater social unrest, and could potentially give so much power to culture wars that we become an increasingly fragmented society."

Gasser and many of the atheists and agnostics who gathered at the "Reason Rally" said they don't see the secular movement as a threat to society. They just want people to respect their right to shun organized religion and to have their voices heard by politicians and policymakers.

Others carried signs or wore shirts that had more provocative messages, such as "If you really believe prayer worked, you'd stop voting," "Freedom is the distance between church and state," and "No God, No Devil, Just Us."

Gasser said she just wants her voice to be heard with the same volume as Christians, Muslims and Jews.

"I'm not really into politics, but I do think that secular beliefs need to be treated equally with people who are believers," she told CNS. "I don't think we're recognized in the government policies and the way people cover campaigns. It's just all appealing to religious people, but there are so many of us who want to have a say in how our country is run."

The poll numbers revealing growing atheist numbers and events like the "Reason Rally" have theology scholars focusing on what they believe is driving the secularism movement.

"The cultural conditions have become more conducive to atheism. We can see that in economic ways in that we are encouraged to think of ourselves as economic individuals," Pecknold said.

"We see that in the Tea Party, a libertarian approach to economic good in which economics is something that is merely representing my own self-interests," he said. "That kind of radical individualism in economic terms or philosophical terms is itself kind of a practical atheism, in which you detach yourself from any sort of transcendent notion of the good, any sort of sense of a common good that you would participate in.

"A kind of view in which I can participate in something bigger than myself is kind of eroded from our economic practice as human beings."

The Holy Spirit's disruptions of wind, noise and fire

All in the family