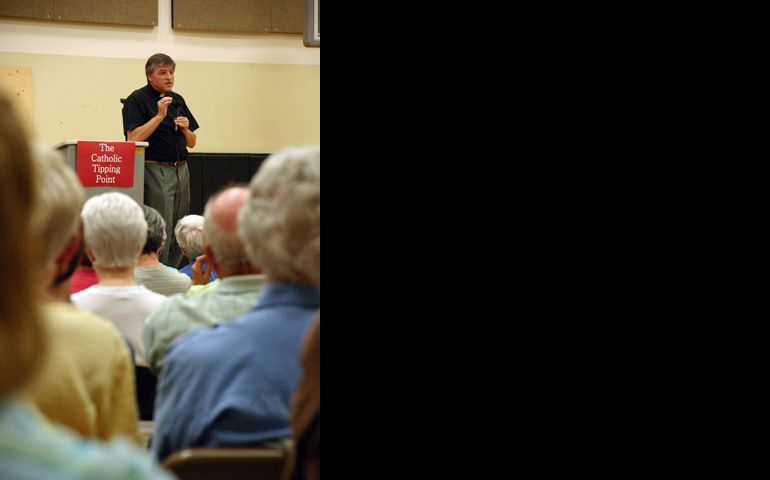 Cincinnati — During his U.S. speaking tour, Austrian priest Fr. Helmut Schüller learned an expression that was new to him: "elephant in the living room."

In Detroit, where he spoke before arriving here Saturday, he met with a group of reform-minded priests who have adopted the expression as their name.

"I like this so much," Schüller said, "that I will bring it back to Europe to help articulate what the problem is."

One problem of which Schüller is well aware is that U.S. priests face a different situation than those in his country. There, in 2006, he and fellow clergy members founded the Austrian Priests' Initiative to spur open discussions about problems in the Catholic church and later gained international attention with their "Call to Disobedience."

Schüller, who holds a variety of leadership positions and is former vicar general of Vienna, has run into conflicts during his 15-city "Catholic Tipping Point" tour: Church authorities in several cities have prohibited him from speaking at any parish or diocesan-related facility. The tour is sponsored nationally by progressive Catholic organizations.

In Cincinnati, the ninth city of his tour, Schüller spoke to almost 400 people gathered in the gymnasium of Fairview-Clifton German Language School near the University of Cincinnati campus.

The crowd, which was made of mostly older people and many nuns, represented those whose anger and frustration with the church have found expression in local organizations such as Voices Speaking, the Greater Cincinnati Catholic church reform group that sponsored Schüller's visit here.

"The hierarchy often casts us as childlike or easily confused who should just continue to pay, pray and obey," said Deb Rose-Milavec, a leader in Voices Speaking. "But we are here because we no longer accept that role."

Among other activities, Voices Speaking members meet regularly with the Archdiocese of Cincinnati’s Bishop Joseph R. Binzer to talk about women’s leadership in the church and the next generation of churchgoers, Rose-Milavec said.

"My question is, Why would you allow the church to shrink in a day and age when we need it more than ever?" she said. "Where does the next generation of young people go to feed on the dream of how justice works in the world?"

It was the shrinking of the church -- the merger of parishes and the dramatic decline in priests -- along with anger over sex abuse scandals, suppression of lay leadership, abuse of power and secrecy in church governance that led to the "Call to Disobedience," Schüller told the Cincinnati crowd.

"The sorrow concerning the future of our church brought us to the point of saying we have to organize ourselves as priests, as pastors, because we were silent for too long," he said.

It all started "politely, as we were educated to be," in meetings with Austrian bishops, Schüller said. "They put tea in our cups and they wrote something on their papers. What is the fate of these papers, no one knows. I suspect there are a lot of such papers around the world."

Such tactics are an affront to the realities of parish life, where there is an urgent need to develop lay leadership and to open the priesthood to anyone with the gifts to lead and inspire, including women and married men, Schüller said to applause.

In Austria, many parishes are breaking church order and law by, among other practices, permitting those who are divorced and remarried outside the church to receive Communion, by reaching out to same-sex couples, and by inviting non-Cathoic Christians to share the Eucharist, Schüller said.

"We realize that as long as we are practicing disobedience silently, [the bishops] seem to have no problem with us," Schüller said. "But what is really moving us is the question of how can we renew our church in the spirit of the Second Vatican Council? This spirit is a rediscovery of the people of God as a community with the Eucharist at the center."

As rain pounded the roof of the gymnasium, Schüller drew strong applause when he touched on two of the themes in his speaking tour: The Eucharist is a symbol of inclusion and must not serve as an instrument of punishment; and women should be priests because "both men and women are made in the image of God."

In the question-and-answer period, Schüller was asked if his organization has been in touch with Pope Francis.

No, he said, but if an invitation came, they would bring priests from all over the world, not just Austria, to show that the reform movement is worldwide, just like the church. Pope Francis has given signals of hope, he said, but it remains to be seen whether these will translate into systemic change.

"Otherwise, we will have the old system with a new, friendly face," Schüller said. "If he is interested in church reform, then our work will be very important to him."

Janice Sevré-Duszynska, a priest and member of the Association of Roman Catholic Womenpriests, told Schüller about the inclusive Catholic community in Cincinnati served by women priests and led by the laity.

Schüller praised these "prophetic steps" but said, "We are asking for the official opening of the whole church so that you must not come by the back door but by the front door."

Asked whether bishops around the world seem to be ready to call a Third Vatican Council, Schüller said he agrees a representative assembly is needed, but "I feel very strongly, only for the moment, that such an assembly could also be a danger. The steps should first be fundamental rights for the faithful. Until we have a change in church governance, all our desires and asking for church reform will be such a thing as letters to Santa Claus. The problem of the Second Vatican Council is that implementation did not happen."

In response to a question, Schüller said his meetings with U.S. priests have varied in every diocese he visited, including his stops in Cleveland, where there was a meeting at an undisclosed location, and in Chicago, where the archbishop told a pastor planning the meeting that he could not have it at his house.

In Cincinnati, he said he planned to meet with a group from the Association of U.S. Catholic Priests, a new organization with a mission to keep alive the vision of Vatican II.

Sister of Charity Louise Akers, who, in 2009, was told by then-Cincinnati Archbishop Daniel Pilarczyk that she must publicly rescind her long-held stance supporting the ordination of women, questioned Schüller about the hierarchy's fear of losing power.

It is not only that fear, Schüller said, but also fear of change "by weak persons in our bishops who are afraid of making a mistake, afraid of taking a risk. It's a question of leadership."

In an interview later, Akers said, "I think people here are energized and go away with our collective vision of an alternative way of being church. More and more people of God are saying things have got to change, and I want to be a part of it. It helps accelerate that change to hear the voice of an ordained priest."

Schüller said he is often asked why he doesn't leave the Catholic church.

"I don't want to leave my church in the hands of those who would bring us back to the thinking of the First Vatican Council," he said. "I choose to struggle for change from inside the church but have a lot of respect for those who do not have the patience for it and are starting new initiatives."

Bob Butts, who came from Dayton, Ohio, to attend Schüller's talk, said he falls in the latter group.

"I'm on the national board of DignityUSA and a member of a faith community called The Living Beatitudes," he said. "I'm not waiting because I view what is happening in these intentional communities as the way the church will be 300 years from now."

Mary Kay Fleming of Crescent Spring, Ky., said she felt inspired by Schüller's commitment to a church he wants so deeply to change.

"It's very tempting to leave," she said. "It's much harder to stay and be faithful and look for the gems of truth in the ministries you support and find a home there. If the church is the people, they should not be able to drive you out. It would be like leaving your own family."

As the crowd thinned out, Rose-Milavec embraced Akers and said people told her Schüller's visit strengthened their resolve to speak out. "One man told me there is such a lack of charity in his church. People are suffering, but they are tired of being afraid."

Bible for African-American youth to be released