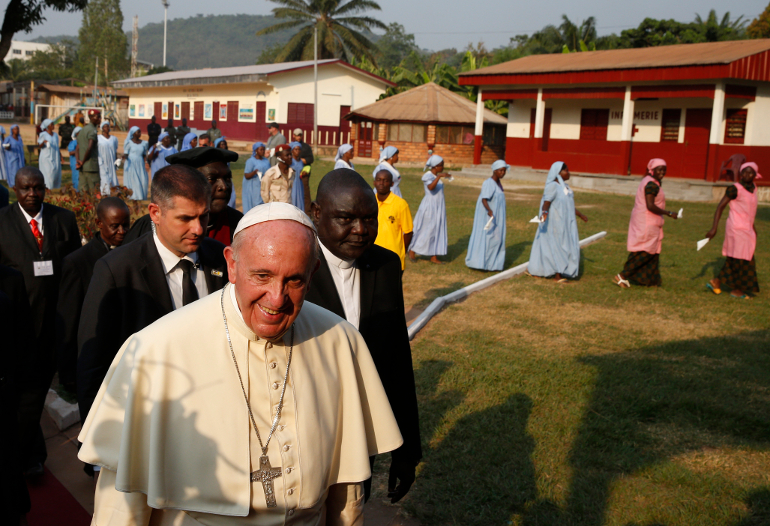 Pope Francis, the pontiff named after a saint who walked into a war zone in the name of peace, has done the same, landing Sunday amid armored tanks and bulletproof-vested guards in this war-torn country in a determined push to show the possibility of Muslim-Christian coexistence.

Touching down here after months of speculation over serious security concerns because of entrenched fighting between armed factions largely belonging to the two religions, the pontiff urged the country to find a way to work together and to “embark serenely on a new chapter of its history.”

Later Sunday, in a strikingly forceful homily during a Mass with priests and religious at the city’s cathedral, the pope cried out: “To all those who unjustly use the weapons of this world, I launch an appeal: lay down these instruments of death!”

During a formal visit with the nation’s political leaders in the morning at the simple and slightly run-down presidential palace, Francis told them: “I come as a pilgrim of peace and an apostle of hope.”

Speaking less than one month before highly anticipated elections to replace a temporary transition government here, the pope said it is his “fervent wish” that the elections would enable the opening of a new historical chapter.

In remarks to the head of the transition government, Catherine Samba-Panza, Francis called on her and her collaborators to work “ceaselessly for unity, human dignity and a peace based on justice.”

“The work of building a prosperous society must be a cooperative effort,” he said, speaking publicly in French for the first time in his pontificate.

Francis was greeted upon his arrival Sunday with an incredibly heavy security presence -- with United Nations soldiers in the traditional blue helmets carrying rifles alongside plainclothes officers, and what appeared to be members of the Vatican detail wearing heavy protective vests.

The official arrival ceremony at the airport was somewhat muted, with only a few lines of children present to greet the pope. Members of the traveling Vatican press corps were forcefully rushed out of the area into buses immediately upon arrival, with likely unprecedented ride-along escorts of rifled guards.

Despite the security, thousands of people had lined the dirt roads from the airport, their presence rows deep in places. Many had a look of clear joy on their faces, with some dancing or waving at the new arrivals.

Although the largely Muslim and Christian armed factions in the Central African Republic signed a ceasefire in 2014, violent skirmishes have continued. Whether Francis would push on with his trip was unknown even up to Saturday afternoon.

His first of six trips in an open-air pope-mobile Sunday -- from the airport to the presidential palace -- was cut short. Francis rode this first four miles of the nine-mile trip in a car before using his traditional papal vehicle.

The likely most dangerous part of the visit is set for Monday morning, when the pope is supposed to visit a mosque in the city’s largest Muslim neighborhood. Given the recent violence between religious groups in the country, the journey of a Christian leader there has raised serious concerns.

In fact, just as Francis’ visit got underway Sunday, reports emerged that two Christians had been killed that morning in the neighborhood near the mosque. Vatican spokesman Jesuit Fr. Federico Lombardi later told reporters that the UN had informed the Vatican that the two were not killed, but had disappeared for some hours before being found.

Even the pontiff’s visit to the Catholic cathedral Sunday -- where he launched his appeal to Central Africans to lay down weapons -- carried significant risks, as the church was subject to a terrorist attack just last year, when 15 people were killed by jihadists who threw grenades inside the building before entering and opening fire.

Lombardi told reporters Saturday evening that planners are taking the trip a day at a time, and would plan to go forward on Monday barring “extraordinary surprises.”

During his visit to the cathedral, Francis made a special sign of reconciliation by opening a holy door there for the upcoming Jubilee Year of Mercy.

It was the first time in the centuries of celebration of Jubilee years that a pontiff opened a holy door in any city other than Rome, and he did so a full eight days before the official start of the year of mercy on Dec. 8.

“Today, Bangui becomes the spiritual capital of the world,” the pontiff told those gathered outside the cathedral to watch him open the door. “The Holy Year of Mercy comes early to this land, a land that has suffered for many years.”

Asking those present to pray for their country and all countries suffering from war, the pope said: "This prayer begins the Holy Year here in this spiritual capital of the world today.” He then pushed the door open with both hands, walking through slowly before pausing in the newly open threshold.

In the homily for the Mass, Francis said one of the “essential characteristics” of being Christian is love of enemies, “which protects us from the temptation to seek revenge and from the spiral of endless retaliation.”

“Those who evangelize must therefore be first and foremost practitioners of forgiveness, specialists in reconciliation, experts in mercy,” said the pontiff. “This is how we can help our brothers and sisters.”

“To all those who unjustly use the weapons of this world, I launch this appeal: lay down these instruments of death!” he cried out later in the homily. “Arm yourselves instead with justice, love, and mercy, the authentic guarantors of peace.”

Francis also visited a camp of some 3,700 persons who have been displaced by the violence in their country on Sunday. Standing amid simple homes made of corrugated cardboard and aluminum, the pontiff gave a short but impassioned plea for peace to people shouting in joy at seeing him.

“We must work and pray and do everything for peace,” he told those in the camp, speaking in Italian but being translated into the local Sango language. “But peace without love, without friendship, without tolerance, without forgiveness, is not possible.”

“Every one of us must do something,” the pope said. “I wish for you, you and all Central Africans, a great peace, a great peace among you -- that you can live in peace, whatever your ethnicity, your religion, your social status may be.”

According to the latest U.N. estimates, some 447,500 Central Africans are internally displaced because of the continuing violence in the country.

Francis is making the visit to the Central African Republic as the last part of a three-country tour of the African continent that began Wednesday. He first visited Kenya and then Uganda before arriving in Bangui.

Samba-Panza is leading a temporary government that is supposed to facilitate new elections for a permanent government in December. In a potential sign of hope, all of the presidential candidates met for the first time Saturday to issue a joint statement welcoming the pontiff to their country.

The current political situation in the country stems from the 2013 seizure of Bangui by a largely Muslims anti-government rebel group known as Seleka. They have been opposed by a largely Christian militia known as the anti-Balaka.

The pope also met with the Central African Catholic bishops on Sunday and took park in an ecumenical meeting with the local evangelical community, and was to lead a prayer vigil with young people.

The meeting at the mosque, intended to be an opportunity of dialogue with the country’s Muslim community, is to occur Monday morning before the pope celebrates a Mass in Bangui’s sports stadium.

Francis’ namesake, 13th-century St. Francis of Assisi, made a pilgrimage to Egypt during the fifth crusade, meeting with Sultan al-Kamil despite an ongoing religious holy war called by the pontiff of his time.

While stories of that encounter have been embellished over time to include accounts of miracles performed by the saint to convince the sultan to convert to Christianity, many modern scholars think the former Italian soldier made the dangerous journey as an attempt at dialogue and encounter, rather than proselytism.

Security in the Central African Republic has largely been provided since 2014 by a some-10,000-strong United Nations force.

Asked Saturday who would be assuming ultimate responsibility for the pope’s safety during the time in the country, Lombardi said the situation involves various components and declined to name a specific security force or person.

The pontiff is scheduled to leave for Rome just after mid-day on Monday.