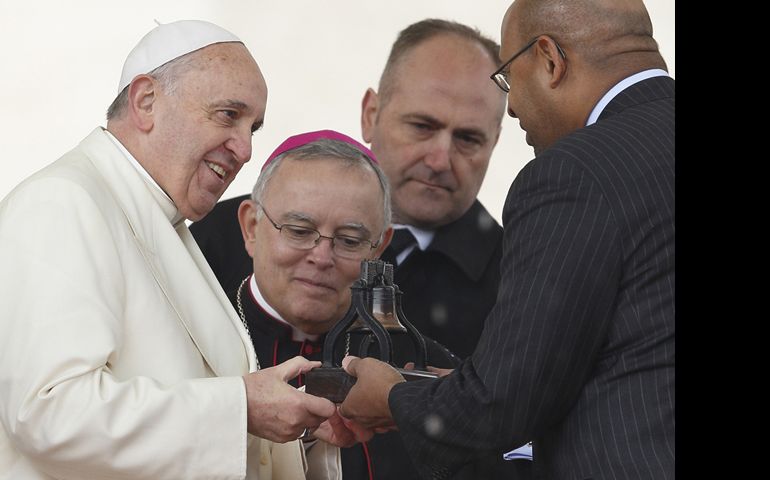 Pope Francis accepts a replica of the Liberty Bell from Philadelphia Mayor Michael Nutter as Philadelphia Archbishop Charles Chaput looks on during the pope's general audience March 26 in St. Peter's Square at the Vatican. (CNS/Paul Haring)

Fargo, N.D. — Philadelphia Archbishop Charles Chaput said Pope Francis has accepted his invitation to attend the World Meeting of Families in the U.S. next year, even though the Philadelphia archdiocese still has not received official confirmation from the Vatican.

Chaput made the announcement Thursday before giving his homily during the opening Mass of the Tekakwitha Conference in Fargo.

"Pope Francis has told me that he is coming," said the archbishop as he invited his fellow Native Americans to the 2015 celebration being held in Philadelphia Sept. 22-27.

"The pope will be with us the Friday, Saturday and Sunday of that week," he said.

Jesuit Fr. Federico Lombardi, Vatican spokesman, said Friday that Pope Francis has expressed "his willingness to participate in the World Meeting of Families" in Philadelphia, and has received invitations to visit other cities as well, which he is considering. Those invitations include New York, the United Nations and Washington.

"There has been no official confirmation by the Vatican or the Holy See of Pope Francis' attendance at the 2015 World Meeting of Families in Philadelphia," the archdiocese said in a statement. "We still expect that any official confirmation will come approximately six months prior to the event."

It said Chaput "has frequently shared his confidence in Pope Francis' attendance at the World Meeting and his personal conversations with the Holy Father are the foundation for that confidence."

"We are further heartened and excited" by Lombardi's comments, it added. "While Archbishop Chaput's comments do not serve as official confirmation, they do serve to bolster our sincere hope that Philadelphia will welcome Pope Francis next September."

Some Mexican media have cited government officials saying a September trip to North America also could include stops in Mexico, but Lombardi said at this moment, "nothing operational has begun relative to a plan or program for a visit to the United States or Mexico. Keep in mind, there is still more than a year to go before the meeting in Philadelphia."

How will Obama's visit with Pope Francis go?

Summer is over, but midsummer madness continues in the church