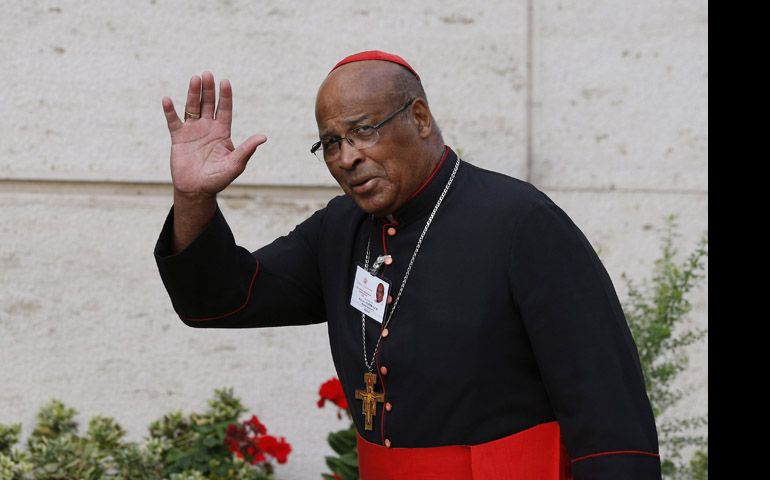 Cardinal Wilfrid F. Napier of Durban, South Africa, greets media as he arrives for a session of the Synod of Bishops on the family at the Vatican Oct. 16. (CNS/Paul Haring)
This article appears in the Family Synod 2015 feature series. View the full series.

Vatican City — One of the 13 cardinals said to have signed a letter to Pope Francis sharply criticizing the ongoing Synod of Bishops has said he no longer has concerns about the gathering and is even optimistic about its outcome.

South African Cardinal Wilfrid Napier told reporters at a briefing Tuesday that Francis' response to the letter -- addressing the entire bishops' gathering on its second day of work Oct. 6 -- "made a huge difference … in the scale of confidence and of trust" in the pope and the synod process.

After hearing the pontiff that day, Napier said he felt "that the concerns had registered, they were being taken care of and therefore, from there on, everyone was going to work at the synod with all they've got."

"I think that's what I've experienced and that has been why I feel that this synod takes up where that first week of the last one had left off, when we were all optimistic and looking forward to really looking together on the issues as a team," said the cardinal, referring to an earlier synod held in 2014.

Intrigue surrounding this year's gathering reached a high last week with publication of the letter from the cardinals to the pope, which had been delivered to the pontiff privately Oct. 5 but was made public by an Italian journalist Oct. 12.

One American cardinal, New York's Timothy Dolan, has confirmed signing the letter. Another, Galveston-Houston's Daniel DiNardo, is said to have signed the letter but has not offered comment on the matter.

Napier, who heads the South African archdiocese of Durban, said Tuesday that the document was a "private letter" that was "written in the spirit of what Pope Francis had said at the beginning of last year's synod, when he said please speak openly and honestly but listen with humility."

The cardinal also renewed his criticism of the 2014 synod, saying that there were "certain individual items that were of concern" to him about that gathering. He mentioned in particular the mid-term report that was released by the synod last year.

That document, he said, "was already saying things which I know were only said in the hall at the most by two or three people, but was presented as if they were the reflection of the synod."

"Now, that certainly gives you the impression that the synod is being pushed in a certain direction," said the cardinal, in reference to the 2014 gathering.

Napier, who served on the drafting committee for the final document from the 2014 synod, is now serving as one of four co-presidents of the 2015 gathering.

At Tuesday's briefing the South African cardinal also fielded a question from a reporter concerned that the Synod might decide to use new language when referring to gay people.

"I think that's a detail we couldn't give you an answer on right now because the official text is going to be in Italian, first of all, so I can't tell you what they're going to write there," Napier responded.

"I think when we look at the problems that we've been studying during these three weeks, there are two possibilities," said the cardinal.

"The one is to look at it from the pastoral point of view, where you're trying to reach out to people and minister to them," he continued. "The other one, which I would say has been deemphasized during this time, even at the synod last year, is the prophetic. Where, like John the Baptist, you say you've got to repent and these are the sins and you name them, as they are."

"This has certainly been a very much more pastoral synod, looking at how can the church be as servant and minister to those people in difficult situations," he said. "There's been a lot of emphasis on using language that doesn't offend."

The some 270 prelates at the synod were to meet in open session Tuesday afternoon. Wednesday is expected to see the release of the final round of public reports from 13 different small discussion groups at the gathering.