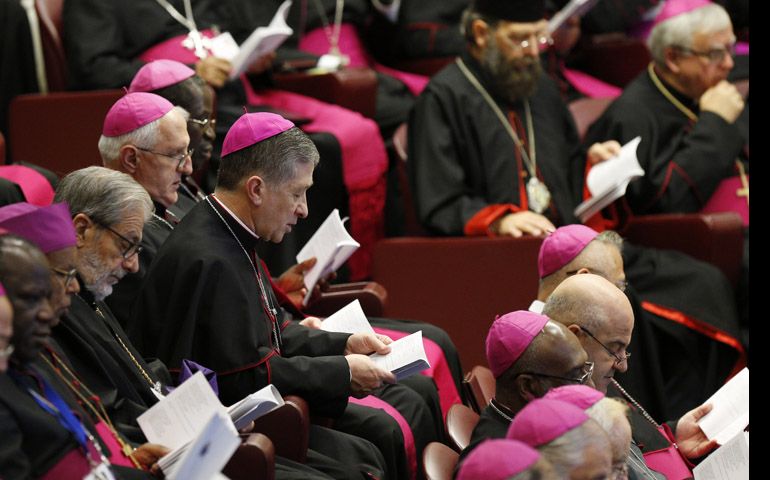 U.S. Archbishop Blase J. Cupich of Chicago participates in prayer at the start of a session of the Synod of Bishops on the family attended by Pope Francis at the Vatican Oct. 9. (CNS/Paul Haring)
This article appears in the Family Synod 2015 feature series. View the full series.

Vatican City — The Catholic church has to respect decisions divorced and remarried people make about their spiritual lives after they examine what their conscience is telling them to do, Chicago's Archbishop Blase Cupich said during a press briefing.

Cupich -- one of nine Americans attending the ongoing Oct. 4-25 Synod of Bishops and one of four personally appointed by Pope Francis -- said that when he counsels divorced and remarried persons he always tries "in some way to understand them."

Citing the Latin root for the word reconciliation -- which indicates not only forgiveness but a seeing of eye-to-eye -- the archbishop said: "If that's the case, then not only do I have to understand them but I also have to see how they understand me."

"I try to help people along the way," said Cupich. "And people come to a decision in good conscience."

"Then our job with the church is to help them move forward and respect that," he said. "The conscience is inviolable. And we have to respect that when they make decisions and I've always done that."

Cupich was speaking Friday in a small briefing with journalists at the Vatican on the progress of the synod, a worldwide meeting of Catholic prelates called by Francis to focus on issues of family life.

One of the discussions known to be taking place at the gathering, being held behind closed doors, regards the church's stance towards divorced persons who remarry without obtaining annulments of their first marriages. Such persons are currently prohibited in church teaching from receiving the Eucharist.

The Chicago archbishop was speaking about his own experience counseling such persons, and was referring to Catholic teaching on the primacy of conscience.

Asked how his experience counseling divorced and remarried persons also applies to same-sex couples, Cupich replied: "I think that gay people are human beings too, and they have a conscience."

"My role as a pastor is to help them discern what the role of God is by looking at the objective moral teaching of the church and yet at the same time helping them through a period of discernment to understand what God is calling them to at that point," said the archbishop.

"I think that it's for everybody," he said. "I think we have to make sure that we don't pigeonhole one group as though they're not part of the human family, so there's a different set of rules for them. That would be, I think, a big mistake."

Cupich's replies about ministering to divorced and remarried persons and same-sex couples were part of a briefing that saw the archbishop touch upon many of the discussions known to be taking place at the synod.

The archbishop spoke particularly about a tension the synod prelates are facing between wanting to respond to Catholics who are looking for strong and certain moral teachings and those who want the church to recognize the messiness of everyday life.

Cupich said he knew a retired archbishop who said he wants his tombstone to read: "I tried to treat you like adults."

"I think that what he means by that is we really do have to have an adult Catholic response to living the Christian life," said the Chicago archbishop. "That I think is where the Holy Father is leading us."

"We have the means by which we can help people come to important decisions about how they live their Christian life," said Cupich. "This is a moment that I think highlights the need for that kind of catechesis all the more."

"Catechesis cannot be just about giving people the fixed doctrines … but also helping them, accompanying them by showing them the way, the path that the church has outlined in terms of making prudent decisions," he said.

The Chicago archbishop also quoted a 2009 document from the International Theological Commission on the role of natural law, saying it is "a very important piece for this Synod."

That document states: "In morality pure deduction by syllogism is not adequate. The more the moralist confronts concrete situations, the more he must have recourse to the wisdom of experience, an experience that integrates the contributions of the other sciences and is nourished by contact with men and women engaged in the action."

"We can't just refer to doctrines as though they're syllogisms that we deduce a conclusion to," said Cupich. "There has to be that integration of a person's circumstances, case by case in their life."

The archbishop also said "the greatest contribution that the bishops can make to families is to act and speak like families act and speak." He said he is one of nine children and told a story of his mother being asked if she loved one of the children more.

"Only if they need it," Cupich quoted his mother.

"Syllogisms are important," he said. "General principles are important. But there's a limitation on how that allows us the freedom to address real life situations that I believe is in concert with what the church teaches."

"I would want to make sure that the full breadth of what the church teaches is brought to bear when we address these very, very delicate questions," he said.

The archbishop also spoke about a desire to change the church's language in order to make it more accessible and understandable to people.

"If we really do want to engage people, they have to recognize that we know their life in the way that we speak," he said.

Giving one example, Cupich said that the use of the word indissolubility in church teaching on marriage had been discussed several times at the synod.

"What we heard is that in different cultures, especially in the East, that word says too much for people -- or it's too hard of a word to understand," said the archbishop. "People understand life-long fidelity, but it seems to be too much of a juridical term to describe the richness and complexity of what a marriage means for people in their culture."

"I had never heard that before, but I get it," he said. "Because what it conveys is not the indissolubility of a wedding band but handcuffs."

Cupich also spoke in depth about German Cardinal Walter Kasper's proposal that there could be some sort of "penitential path" for divorced and remarried persons to be readmitted to the Eucharist in certain circumstances.

The archbishop said he had given the book in which Kasper makes the proposal, The Gospel of the Family, to all the priests of his archdiocese. "I wanted them to read that because I thought it was very rich theologically," he said.

"I think that he has reasoned this proposal well, given the theology that he offers," said Cupich. "I do think that we should look at a way in which people are not just accompanied but integrated and reconciled."

"We have to believe in the mercy of God and the grace of God to trigger conversion, rather than having it the other way around as though you're only going to get mercy if you have the conversion," said the archbishop. "The economy of salvation doesn't work that way. Christ receives people and it's because of that mercy that the conversion happens."

Cupich then told a story he said a priest had told him of celebrating a funeral for a young man who had committed suicide. The man's mother, he said, was divorced and remarried and also "very angry" at God and the church over what had happened.

When she came forward in the Communion line at the funeral Mass, she folded her arms, a common sign that she would not receive Communion but wanted a blessing. The priest said to her: "No, today you have to receive."

"She went back to her pew and wept uncontrollably," said the archbishop. "She then came back to visit with the priest and began reconciliation."

"Her heart was changed," said Cupich. "She did have her [first] marriage annulled; her [second] marriage is now in the church."

"But it was because that priest looked for mercy and grace to touch her heart," he said. "That's something we have to keep in mind. And I think the Holy Father has talked about that. It's not a straight line."