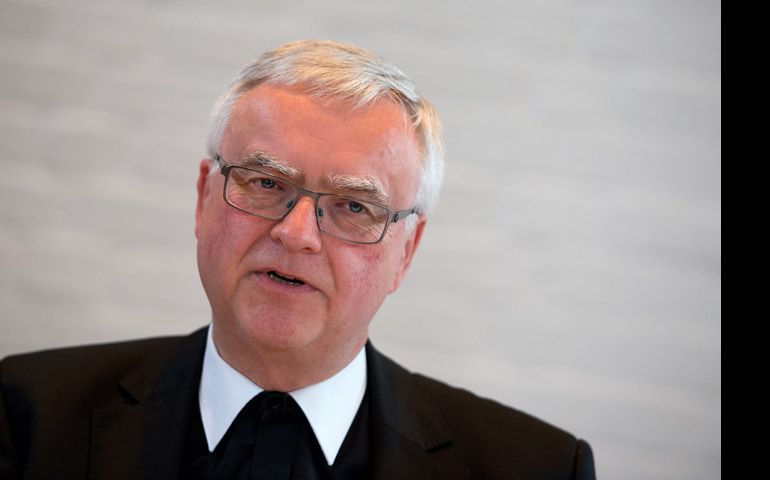 Bishop Heiner Koch of Dresden, Germany, speaks at a press conference June 8 at his office following the announcement that he will be the new archbishop of Berlin. (CNS/Arno Burgi, EPA)
This article appears in the Family Synod 2015 feature series. View the full series.

Vatican City — One of Germany’s representatives at the worldwide meeting of Catholic prelates on family has pointedly told the gathering that church teaching preventing divorced and remarried persons from receiving the Eucharist makes people “doubt God.”

Berlin Archbishop Heiner Koch has used his 3-minute address during the deliberations to directly address one of the issues known to be creating the most disagreement among the prelates, saying he is often asked why remarried couples are barred from the Eucharistic table.

The church’s theological arguments “do not silence the questions in the hearts of people,” Koch told the assembly.

“Is there no place at the Lord’s table for people who experienced and suffered an irreversible break in their lives?” he asked. “How perfect and holy must one be to be allowed to the supper of the Lord?”

“It becomes clear to me every time that the question of allowing divorced and remarried people to the Eucharist is not in the first place a question about the indissolubility of the sacrament of marriage,” said the archbishop.

“Many people question the Church and her mercy in this regard,” he said. “More than a few people concerned leave the Church with their children on the basis of what they see as rejection.”

“Ultimately and most profoundly it is much more about the Christian faith and God and His mercy,” he continued. “For many, the question of admittance to the Eucharist makes them doubt God.”

Each of the some 270 bishops participating in the Oct. 4-25 Synod is being given three minutes to address the entire assembly. While the meetings are not open, and the press is therefore not witnessing each of the statements, some of the bishops are making their remarks public.

Koch released his statement in German at the website of the country’s episcopal conference. Mark de Vries, a Dutch blogger, has released an English-language translation of the remarks.

The German archbishop’s text is notable for the way it directly confronts an issue known to be causing disagreement in the Synod.

While some bishops have expressed an openness to a proposal for some sort of “penitential path” to allow some divorced and remarried Catholics to receive communion, others have expressed concerns that such a proposal would put in doubt the church’s teaching on the indissolubility of marriage.

Divorced and remarried Catholics are currently prohibited from taking Communion unless they have received annulments of their first marriages.

In a sign of the disagreement on the issue, of the Synod’s organizers opened the event Monday by saying there could be no “graduality” on the matter.

“In the search for pastoral solutions for the difficulties of certain civilly divorced and remarried persons, it is presently held that the fidelity to the indissolubility of marriage cannot be joined to the practical recognizing of the goodness of concrete situations that stand opposed and are therefore incompatible,” said Hungarian Cardinal Peter Erdő, who is serving as the Synod’s general relator.

“Indeed, between true and false, between good and evil, there is not a graduality,” he continued. “Even if some forms of living together bring in themselves certain positive aspects, this does not mean that they can be presented as good things.”

Koch, who was appointed as the leader of the Berlin archdiocese by Francis in June, also focused his comments at the Synod on a range of other issues. He spoke in particular about the needs of interfaith marriages, struggles of single parents, of families with many children, of refugees, and a desire to protect the elderly and unborn children

“It is so important that the Holy Father, with us, sends out from this Synod the Gospel of the mystery of marriage, with a new hermeneutic, in a new language, a language of fullness, of blessing, of the richness of life, provocative and inviting for the people,” said the German archbishop.

“What grace is offered to the people, what participation in God’s order of creation and salvation, what depths of mutual love between God and people: Marriage is for us about a life in fullness and in the love of God, even in our brokenness,” said Koch.

“This must be our message in Church and society,” he said. “The Synod cannot give the impression that we mainly fought over divorce and conditions for admittance to the sacraments.”

Three popes and the power of communications

Cardinal Marx: Pope Francis has pushed open the doors of the church