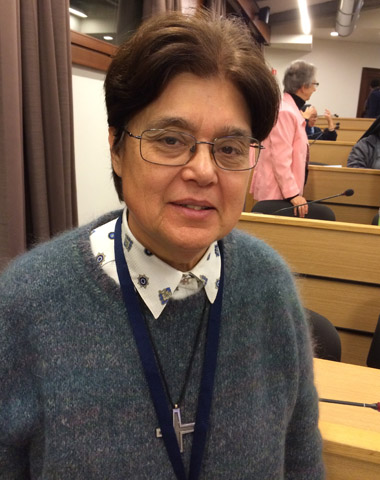 The leader of the umbrella group for some 600,000 global Catholic women religious has said that in the wake of this month's Synod of Bishops the women are called to carry forth the pastoral work that the official church is sometimes not able to do.

Maltese Sr. Carmen Sammut -- who participated in the Oct. 4-25 Synod as one of 32 women who took part in non-voting roles alongside the 270 prelate-members -- said the women religious should engage with people church institutions may not even know need help.

"I think that we should not give up our role at the frontiers of the church," said Sammut, who heads the International Union of Superiors General (UISG).

"With the people ... who are needing the pastoral care -- and get it very often not from the official church, but from us," she described their work, proposing the religious ask themselves: "How are we engaging with people the official church is not seeing?"

With publishing of the Synod's final document, Sammut said another question to ask is: "How can we make sure that this does not remain just dead letters -- to say even to bishops and priests, 'How are we carrying this forward?'"

"I think we can push some things," she said.

Sammut, who is also the general superior of the Missionary Sisters of Our Lady of Africa, was speaking Monday at a public session with UISG members to give an overview of her experience serving as an auditor at the bishops' gathering. The session was titled: "The Synod on the Family from a Back Bench."

Auditors were allowed to attend and participate in the synod discussions but not to vote on the final document. Among the auditors at this synod were 17 individuals and 17 married couples. Thirteen of the individual auditors were women, including Sammut and two other religious sisters representing UISG.

The international sisters' group is a membership organization of about 1,800 leaders of the world's congregations of Catholic sisters and nuns.

Sammut spoke first Monday about the process by which she and two other sisters were appointed as auditors, explaining that it did not come about easily. The woman religious said that her group had no official inclusion in the last Synod of Bishops, held in 2014.

"Don't think that it was automatic," Sammut told the women religious at the gathering about their participation. "We had to work for it."

A similar group representing male religious orders had 10 representatives at the 2015 synod, who were full-voting members of the gathering. For the first time in the 50 years of the synod, one of those representatives was a non-priest: Br. Herve Janson of the Little Brothers of Jesus.

Sammut mentioned Janson's role, saying: "This is the first time that there is a non-ordained person voting in a synod, so some things can change slowly."

The UISG leader also mentioned that she had an opportunity during the synod on Oct. 16 to meet privately for a moment with Pope Francis.

She said she asked the pontiff if he had received a number of letters her group had written to him that focused particularly on expressing their availability to provide input should the pope want to consider more deeply his expressed desire for greater roles for women in the church.

Francis, Sammut said, indicated he had not received the letters. The UISG leader then said she invited the pope to take part in her group's next triennial general assembly, taking place in May 2016.

Sammut said she received a hand-written note in the mail from Francis the next day, in which the pontiff promised a general audience with the some 800 women religious coming to Rome for the gathering. The letter was handwritten in Spanish, with the envelope even addressed by the pope, who gave a return address of: "F., Casa Santa Marta, Citta del Vaticano."

Throughout the rest of her presentation Monday, the UISG leader mostly recapped the three-week process of the synod for the women religious but also provided a number of anecdotal insights about what it was like behind the scenes.

Sammut said one thing that was a "bit difficult" was following along to the bishops' interventions during the open sessions of the synod when each of the prelates had one opportunity to speak for three minutes.

"The interventions were extremely different," said the woman religious. "You could hear the thing and it's opposite."

"It became a very frustrating and confused experience, and there was no way for me, who has lived all my 30 years of missionary experience outside the center of Rome in a very small and periphery church in North Africa to know who was thinking what," she said.

Sammut also said that the synod process did not allow for enough reflection or prayer time for prelates to consider the different points of view they were hearing.

"For me, the weakness for this method was that there was no real time allowed for a real discernment process," said the woman religious.

"When you have such very big differences, how do you bring all that together?" she asked.

The prelates needed "enough prayerful time to digest all that and to distinguish the movements of the Spirit and to speak not of what I desire personally ... but of what the Spirit seems to be saying to the church," she said.

The UISG leader also spoke of her experience taking part in one of the synod's 13 small discussion groups, which were broken up by language preference. The time in her group was "one of the best sharings" in the synod, she said.

"Within my group, all types of families were present, with their joys and the problems," said Sammut. "There was no ideal, perfect family out there."

"The image that came after that sharing was the Risen Christ showing us his wounds," she said. "I found it important for me to let my eyes of faith encounter the wounded and risen Christ in each of these families we were talking about."

The most difficult discussions at the synod came when the prelates were considering questions such as how the church treats divorced and remarried persons, Sammut said.

"They have to hold the doctrine of the church while attending to the pastoral needs of each person in their diocese," she continued, saying they want to "show the all-embracing face of God while still keeping to the discipline of the church."

"How do you become free enough to go beyond fear?" she asked of the bishops' considerations.

Divorced and remarried Catholics are currently prohibited from receiving Communion in the church unless they receive annulments of their first marriages.

While the final document released from the synod Saturday proposes such persons should discern decisions about their spiritual lives individually in concert with the guidance of priests, Sammut said the deliberations on the matter were difficult.

"One thing that completely shocked me is that some people were talking about not opening the sacrament of penance to divorced and remarried," she said. "One of the reasons that was sometimes given ... is that the other Catholics will be scandalized if they see them going to Communion, or they see them admitted to the sacraments."

"What type of Christians, then, are we making of the good Christians?" Sammut asked. "How can a good Christian want to deprive others of what is important and necessary for another's life?"