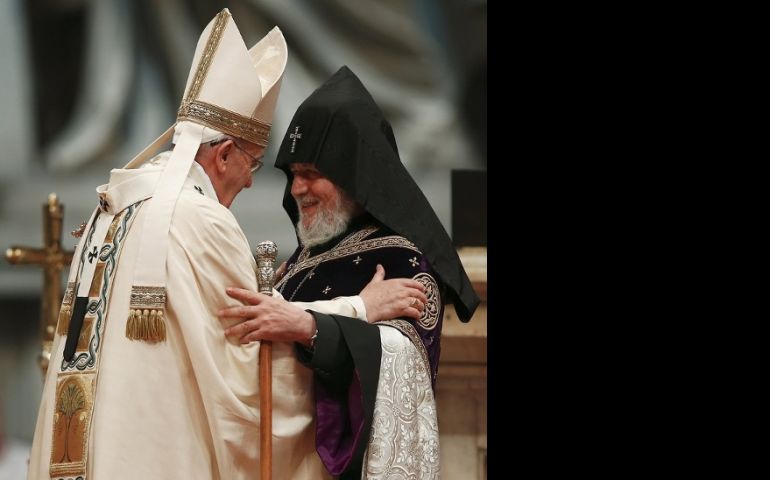 Pope Francis embraces Catholicos Karekin II, patriarch of the Armenian Apostolic Church, during a 2015 Mass in St. Peter's Basilica at the Vatican to mark the 100th anniversary of the Armenian genocide. (CNS photo/Tony Gentile, Reuters)
This article appears in the Francis in Armenia feature series. View the full series.

Editor's note: NCR's Vatican correspondent Josh McElwee will be reporting on the ground during Pope Francis' visit to Armenia, June 24-26. Catch all of McElwee's reporting at feature series page Francis in Armenia.

As Pope Francis prepares to embark on a three-day trip to Armenia this week, experts and church leaders are hoping the visit both highlights strong ties between Catholic and Orthodox Christian communities there and brings about opportunities for political rapprochement in its continent-straddling region.

One of the leaders of the Armenian Apostolic church, an Oriental Orthodox community that includes 93 percent of Armenia's population of three million, hopes that the pope might help encourage friendlier relations with neighboring countries Turkey and Azerbaijan.

"My prayer is that the Holy Father, because of his strong leadership, will help [in] creating better relationships," said Archbishop Khajag Barsamian, the primate of the Armenian church's diocese for the eastern half of the U.S.

"Sometimes, religious leaders … can play a stronger role than political leaders, whose interests are different," said Barsamian. "The interests of the Holy Father are for peace in the world, reconciliation."

Armenia, a former Soviet republic in the Caucasus region, is located between the Black and Caspian seas, with Turkey to its west and Azerbaijan to its east. Its position places the country between Europe, Asia, the Middle East and Russia.

Francis will visit the country June 24-26 for the first part of a wider tour of the Caucasus region. He will visit Azerbaijan and Georgia later in the year, Sept. 30-Oct. 2.

At the center of the Armenia visit stands a complex political relationship with Turkey. The two countries, both former members of the Ottoman Empire, do not have formal diplomatic relations, and their shared border is closed with barbed-wire fencing.

The pope also caused a diplomatic stir with Turkish leaders last year when he described the World War I-era killings of 1.5 million Armenians as the first genocide of the 20th century, a description Turkish leaders have long resisted.

The killings started in 1915, when the Ottoman government began rounding up and arresting Armenian community leaders. Turkey, the successor state to the empire, claims that the word "genocide" does not accurately describe the killings.

In one of the most anticipated moments of the Armenian visit, Francis will visit a museum dedicated to the memory of the killings on June 25. One Turkish observer and policy expert said reaction to the trip by his government will likely depend on what the pope chooses to say when he visits that museum.

"I don't think that will be a problem because any state leader who goes to Armenia visits the genocide memorial," said Aybars Görgülü, an expert at Public Policy and Democratic Studies, an Istanbul-based research and advocacy think-tank.

But, Görgülü added: "It depends on what he will say."

"If he repeats what he said last year, making another strong statement, then Turkey will have a reaction," he said, mentioning that the country temporarily withdrew its ambassador to the Vatican after the pope's words in 2015.

Barsamian, whose diocese ministers to about a million members of the Armenian church in the U.S., said Francis' visit is a "great opportunity for the Armenian people to also express their gratitude" for his description of genocide.

"It was such a very clear, very pastoral, very strong message to the world, saying that this is the first genocide of the 20th century and it's important we recognize the mistakes of the past," said the archbishop.

"This will be a great opportunity for the Armenian people to express their gratitude, their appreciation to the Holy Father for such a courageous step and for a strong spiritual leadership," he said.

Beyond the political dimension of the genocide issue, Barsamian said Francis also has an opportunity in Armenia to model ecumenical leadership and friendship during his visits with the Orthodox community.

The Armenian Apostolic church, which traces its founding to the apostles Bartholomew and Thaddeus, is one of six churches that form Oriental Orthodoxy. Those churches, which have about 84 million members together, recognize only the first three ecumenical councils, breaking off from the other Christian churches in the fifth century.

The Armenian church is led by its chief bishop, Karekin II, known as the Catholicos.

Francis will spend time with Karekin upon landing in the country June 24, host an ecumenical prayer for peace with him June 25, and participate in an Armenian Orthodox liturgy June 26 before signing a joint ecumenical declaration that day.

Roberson mentioned Pope John Paul II's visit to Armenia in 2001, when the pontiff celebrated a Mass for the local Roman Catholic community using the same altar that the Orthodox use in their celebrations.

"It's a classic example of the 'almost-perfect' communion that exists between the Catholic church and many of the eastern churches," said Roberson, adding that there is a "very high level of mutual respect."

Barsamian said he hoped meetings between Francis and Karekin would help Catholics and Orthodox at local levels around the world practice greater friendship.

"Such meetings send a great message to the people, to faithful everywhere, so that locally laypeople and clergy see that on a higher level there is such a connection and communication," said the archbishop.

“When the pastors, the faithful, see that on this level there is such a warm, brotherly relationship, then on a local level people become closer," he said.

Francis and Armenian Orthodox patriarch say churches are one in prayer, action