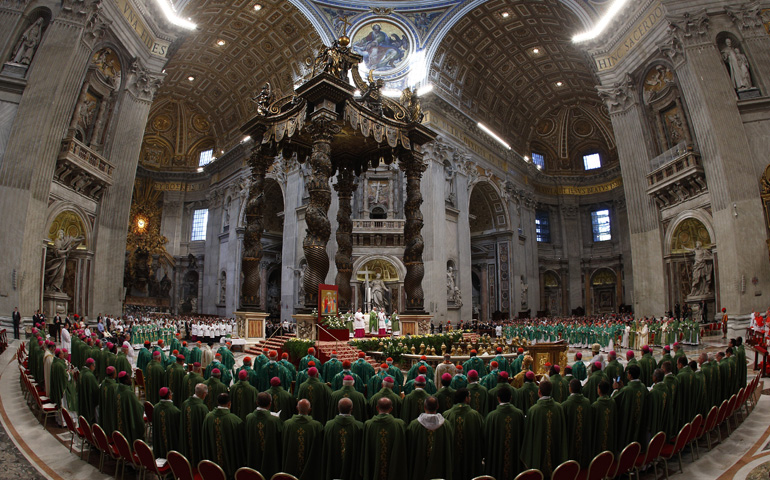 Pope Francis celebrates a Mass to open the extraordinary Synod of Bishops on the family Sunday in St. Peter's Basilica at the Vatican. (CNS/Paul Haring)

Pope Francis opened a worldwide meeting of Catholic bishops Sunday -- a possible landmark of his papacy -- by warning against "bad shepherds" who unduly burden the faithful and who "thwart" God by not being guided by the Holy Spirit.

Francis was speaking in a homily during the opening Mass for the meeting, known as a synod and focusing on modern struggles of family life, in St. Peter's Basilica.

Referring to the Mass readings for the day and to the prophet Ezekiel’s warning about shepherds who care for themselves and not their sheep, the pontiff said some shepherds become tempted by "greed for money and power."

"To satisfy this greed bad shepherds lay intolerable burdens on the shoulders of others, which they themselves do not lift a finger to move," said Francis.

The pontiff also laid out clearly what the synod is not to do.

"Synod assemblies are not meant to discuss beautiful and clever ideas, or to see who is more intelligent," said the pontiff. "They are meant to better nurture and tend the Lord's vineyard, to help realize his dream, his loving plan for his people."

Francis' words Sunday are likely to be met with much speculation over what direction the pontiff hopes the synod, in which some 190 bishops and cardinals will discuss family life topics in closed-door sessions Oct. 6-19, will take.

Preparations for the event, the first of two synods on the topic in 2014 and 2015, have raised expectations that some of the church's pastoral practices regarding family life might change, particularly about how the church cares for the divorced and remarried.

Referring to the Gospel reading Sunday -- a parable from Jesus in Matthew's Gospel about tenants who take over the owner's vineyard -- Francis said bishops can also "be tempted to 'take over' the vineyard, because of that greed which is always present in us human beings."

"God's dream always clashes with the hypocrisy of some of his servants," said Francis. "We can 'thwart' God's dream if we fail to let ourselves be guided by the Holy Spirit."

"The Spirit gives us that wisdom which surpasses knowledge, and enables us to work generously with authentic freedom and humble creativity," he continued.

Francis' words Sunday followed similar remarks the pontiff made Saturday evening in a prayer vigil in St. Peter's Square for the opening of the synod.

Addressing tens of thousands of people in the square, the pontiff called for the group to "invoke an openness toward a sincere discussion, open and fraternal, which leads us to carry with pastoral responsibility the questions that this change in epoch brings."

The bishops' work during the synod, which will take place behind closed-doors in the Vatican's Paul VI Hall, starts formally Monday morning with opening addresses from the prelates leading the event.

Monday afternoon through Thursday evening, the bishops will open each of their meetings with an announcement of the theme for that session, followed by a testimony by a married couple on the theme.

One cardinal speaking to NCR Saturday said the synod was to focus on the lived realities of people today.

"In the end, what we're talking about always are people's lives," said Cardinal Vincent Nichols, who is the archbishop of Westminster and is attending the synod as the president of the bishops' conference of England and Wales.

"We have to be dealing with these things sensitively, pastorally -- and giving ourselves the space to accompany individuals, real people, in their actual situation," he said.