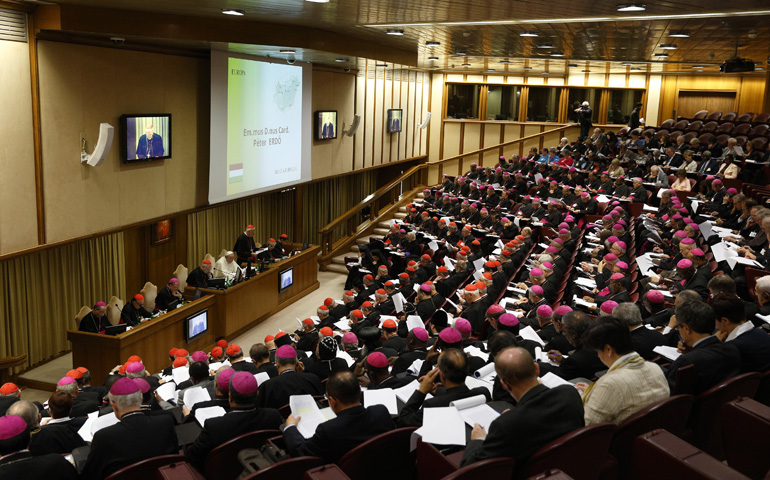 Pope Francis and prelates listen as Cardinal Peter Erdo of Esztergom-Budapest, Hungary, addresses the morning session of the extraordinary Synod of Bishops on the family Monday at the Vatican. (CNS/Paul Haring)

Several prelates responsible for helping lead the Synod of Bishops on the family have said the landmark document the synod released Monday was the result of a newfound spirit of the Second Vatican Council in the prelates' discussions.

Commenting on the document and the synod, Philippines Cardinal Luis Tagle said: "This morning in the free discussion, some of the synod fathers and participants said openly that they felt the spirit of Vatican II very much."

"I think what the participants were saying is this ... Vatican II reflected definitely on the church and its mission in the contemporary world," said Tagle, who is serving as one of three presidents for the synod.

Tagle said Pope Paul VI, who continued the 1962-65 global meeting of bishops known as the Second Vatican Council that Pope John XXIII started, "had as a vision a church that is not self-absorbed but a church that knows how to exist as a missionary church, listening and dialoguing with the contemporary world."

"I think that was what the synod fathers were affirming," Tagle said. "That the mission insight of Vatican II from John XXIII and Pope Paul VI in a way was happening to us, we who were not able to participate in Vatican II, but we had a slice of it -- some sort of a taste of it."

Tagle spoke Monday afternoon during a Vatican press conference about a 12-page document the synod released that morning. The document, which summarizes the discussions so far of the Oct. 5-19 event, calls for the church to listen more, to respect people in their various struggles, and to apply mercy more widely.

Forte echoed Tagle's assessment of the role of Vatican II in the synod's discussions, saying the whole synod "was done in the spirit of the Second Vatican Council."

The archbishop quoted the opening of the council's pastoral constitution on the church in the modern world, Gaudium et Spes, saying the synod wished to hear "the joys and the hopes, the griefs and the anxieties of the women and men of this age."

Pope Francis has called two synods for 2014 and 2015 to focus on family issues. The Second Vatican Council has been a hot point for conversation in Catholic circles over the past 40 years, with some praising its work to reform certain aspects of the church's teachings and others saying those reforms may have gone too far or have been misinterpreted.

Monday's document was released after a week of meetings by the prelates, which saw speeches given by them on the subject in the Vatican's Paul VI Hall.

Forte said at the briefing Monday that the role of the non-prelates in the synod, many of whom are couples who gave testimony to different aspects of family life today, had been "decisive."

"We hope bishops will listen and promote participation of laypeople," he said.

Tagle also touched upon the role of laypeople, saying the synod wanted them to have a greater role in the church.

"In the daily pastoral work, especially for the families and the youth and education, it has been affirmed here in the synod hall that the laity should really take their proper place," Tagle said.

"For it is part of the teaching, the sprit of Vatican II, that while the church has one mission received from Jesus Christ, that mission is formed or shared and participated in by Christians who have received different gifts from the Holy Spirit and who find themselves in different states of life," the cardinal continued.

"And conjugal, married life is one domain where the baptismal grace and the gifts of the spirit and the state of life of the laity really lend ... themselves to the participation of the laypeople," Tagle said.

"It has been affirmed a number of times in the synod that in the parishes and in the dioceses the laypeople should be heard more often," he said. "The pastors should listen to the realities of married life coming from laypeople."

Tagle is a Vatican II scholar. He studied at The Catholic University of America under Fr. Joseph Komonchak and his doctoral dissertation explored the development of episcopal collegiality at the council. He also served on the editorial board of the History of Vatican II project of Giuseppe Alberigo, the longtime director of the Institute for Religious Sciences at the University of Bologna, Italy. The work was published in English by Orbis Books as a five-volume set from 1996 to 2006.

Among the issues most mentioned at Monday's briefing was the synod document's stance toward gay people. The document states: "Homosexuals have gifts and qualities to offer to the Christian community: are we capable of welcoming these people, guaranteeing to them a fraternal space in our communities?"

Asked if that stance represented a change in understanding of sexual orientation at the highest levels of the church, Forte said Monday: "What I want to express is that we must respect the dignity of every person."

"The fact to be homosexual does not mean that this dignity does not have to be recognized and promoted," he continued.

Asked how the church would respond to same-sex unions, Forte said such unions have "rights that should be protected," and this is an "issue of civilization and respect of those people."

Tagle was asked if the synod's document did not represent the views of more conservative prelates.

Saying he had presided over the synod's general sessions twice, the cardinal said: "I tell you, the list of people who have signified to speak and the number of people called to speak is much more than what the computer screen can handle. So there is ample space for everyone to speak."

"I would be very careful in labeling people," Tagle continued. "Who is conservative? Who is progressive? That's dangerous. I always look at people -- they may differ, but they are all bound together by a common love for the church, fidelity to Christ, and a common mission."

Through the rest of this week, the synod members will meet in small groups, divided by language, to discuss and edit Monday's document in view of creating a final document for the synod for submission to Pope Francis.

That final document is expected to be released to the public and to be used as the blueprint of sorts for the 2015 synod.