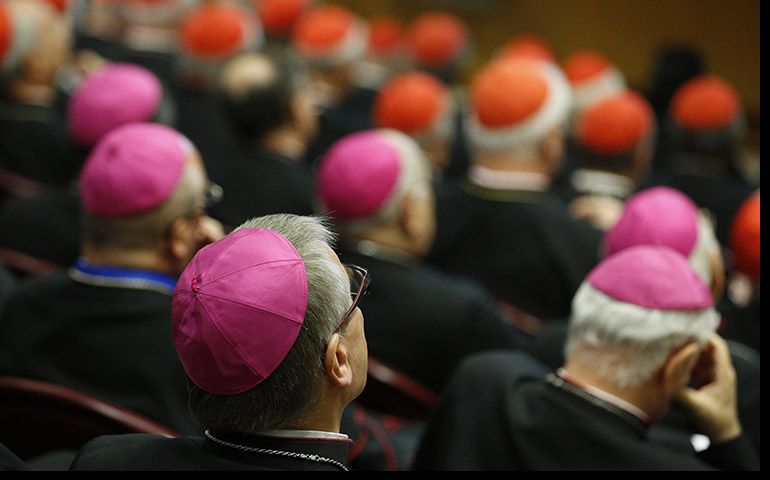 Bishops and cardinals attend a session of the Synod of Bishops on the family at the Vatican Oct. 24. (CNS/Paul Haring)
This article appears in the Family Synod 2015 feature series. View the full series.

Vatican City — A worldwide gathering of some 270 Catholic bishops has recommended softening the church’s practice towards those who have divorced and remarried, saying such persons should discern decisions about their spiritual lives individually in concert with the guidance of priests.

Pope Francis also closed the meeting with a strong renewal of his continual emphasis of the boundless nature of divine mercy, saying: “The Church’s first duty is not to hand down condemnations or anathemas, but to proclaim God’s mercy.”

Although the final document from the Oct. 4-25 Synod of Bishops says discernment for remarried persons can “never overlook the demands of truth and love in the Gospel,” it seems to significantly move decision-making for how they can participate in the church to private conversations in dioceses around the world.

Suggesting use of what is called the “internal forum,” the document says priests can help remarried Catholics “in becoming conscious of their situation before God” and then deciding how to move forward.

“The conversation with the priest, in internal forum, contributes to the formation of a correct decision on what is blocking the possibility of a fuller participation in the life of the church and on steps that might foster it and make it grow,” states the document.

“For this to happen, the necessary conditions should be guaranteed of humility, discretion, and love of the Church and its teachings in the sincere seeking of the will of God and in the wish to give a more perfect response to it,” the document continues.

While the words in the document lack specificity, they may signify a notable shift in the church’s practice that divorced and remarried persons cannot take Communion without receiving annulments of their first marriages.

Also notable is the fact that neither the words Communion or Eucharist appear in the paragraphs, allowing interpretation of their meaning and a possible opening for Francis to make more specific decisions in the future.

It is also significant that the paragraphs faced significant opposition in the voting on the document, reflecting that a group of bishops would have preferred no change in current practice towards the remarried.

Catholic teaching says that acts of governance in the church can take place either in an internal or external forum. The internal forum is the forum of conscience, where a decision is made in private counseling with a priest without a formal decree or any sort of publicity.

Saturday’s final document from the Synod of Bishops is the fruit of three weeks of intense and sometimes heated deliberations among the global prelates, who were called to Rome by the pope to consider issues of family life.

The bishops voted on the document in their last session of the meeting Saturday evening, giving each paragraph a simple yes or no vote. Each of the 94 paragraphs of the document were adopted by the assembly with the required two-thirds vote, 177 bishops of the 265 present for the voting.

The three paragraphs dealing with issues relating to divorced and remarried Catholics were closest in the voting, receiving, respectively, 187, 178, and 190 votes.

The middle paragraph, which received the most no votes of any paragraph in the document at 80, states that decisions on what action to take about divorced and remarried persons will not always be the same in every case.

“It is necessary to recognize that the responsibility with respect to determinative actions or decisions is not the same in all cases,” states that paragraph.

“The pastoral discernment, surely taking into account the righteously formed conscience of persons, must make itself aware of these situations,” it states. "The consequences of the acts done is also not necessarily the same in all cases.”

Francis concluded the synod after the voting Saturday afternoon with remarks that spoke eloquently about the journey the bishops had traversed in their days together, and emphasized anew his call for prelates to refrain from being “doctors of the law.”

“The Synod experience … made us better realize that the true defenders of doctrine are not those who uphold its letter, but its spirit; not ideas but people; not formulae but the gratuitousness of God’s love and forgiveness,” the pontiff told the bishops.

“This is in no way to detract from the importance of formulae, laws and divine commandments, but rather to exalt the greatness of the true God, who does not treat us according to our merits or even according to our works but solely according to the boundless generosity of his Mercy,” said the pope.

The contested paragraph in the final document on remarried persons that received 178 votes also quotes at length Pope John Paul II’s 1981 apostolic exhortation​* Familiaris Consortio, saying that document means it is “the work of priests to accompany interested persons in the way of discernment according to the teaching of the Church and the directions of the Bishop.”

It proposes that divorced and remarried persons make an examination of conscience, asking how they have treated any children they may have had in their first marriages, if they attempted to reconcile with their partners, and what example they are giving to young people preparing for marriage.

“A sincere reflection can reinforce the truth in the mercy of God that is not denied to anyone,” it states.

An earlier paragraph calls for the integration of divorced and remarried persons into the church community, but states such inclusion must be made "avoiding every occasion of scandal."

"They are baptized, they are brothers and sisters, the Holy Spirit pours out in them gifts and charisms for the good of all," states that paragraph of remarried persons. "Their participation can express itself in various ecclesial needs."

"This integration is necessary surely for the care and Christian education of their children, who must be considered the most important," it continues. "For the Christian community, taking care of these persons is not a weakness of our faith and of our witness regarding the indissolubility of marriage; in fact, the church expresses exactly in this care its love."

Francis said in his remarks that the three-week synod “was about bearing witness to everyone that, for the Church, the Gospel continues to be a vital source of eternal newness, against all those who would ‘indoctrinate’ it in dead stones to be hurled at others.”

“It was also about laying bare the closed hearts which frequently hide even behind the Church’s teachings or good intentions, in order to sit in the chair of Moses and judge, sometimes with superiority and superficiality, difficult cases and wounded families,” said the pope.

“It was about trying to open up broader horizons, rising above the hermeneutic of conspiracy or closed viewpoints, so as to defend and spread the freedom of the children of God, and to transmit the beauty of Christian Newness, at times encrusted in a language which is archaic or simply incomprehensible,” the pontiff continued.

The final synod document is about 66 pages in length and touches on a wide range of issues facing families around the world. It is addressed specifically to Francis, with the bishops writing that they are giving it to him and “asking humbly” that he consider writing a document of his own about the family.

While the Vatican published the pope’s remarks Saturday in four languages, the final synod document is as yet available only in Italian.

Release of the final document comes after a gathering that was unusually contentious, even seeing publishing of a private letter written by 13 cardinals to Francis who told the pontiff the meeting seemed "designed to facilitate predetermined results on important disputed questions."

Washington Cardinal Donald Wuerl strongly rebutted claims of manipulation at the synod in an NCR interview last week, saying the process for the event took "extraordinary efforts to arrive at a consensus."

"I don't know how you would be unhappy with the process if you're really looking at consensus building," Wuerl said then.

Francis seemed to refer to the contentiousness of the meeting in his closing speech Saturday, saying that during the synod different opinions were expressed freely and "at times, unfortunately, not in entirely well-meaning ways."

The synod's final document speaks about gay persons in one paragraph, repeating church statements that persons with “homosexual tendencies” should be “respected in their dignity and received with respect, with care to avoid ‘every type of unjust discrimination.’”

The document, however, also criticizes international organizations that condition financial aid to developing countries on the institution of same-sex marriage laws.

The document also touches upon church teaching on artificial contraception, quoting Pope Paul VI’s 1968 encyclical Humanae Vitae that prohibited the practice. But the Synod document also calls for a “consensual dialog” between spouses when considering children.

The document also speaks of taking decisions about having children after reflecting on what one is hearing in conscience, quoting the Second Vatican Council document Gaudium et Spes to say: “The responsible choice of procreation presumes the formation of conscience, which is ‘the most secret core and sanctuary of a man where he is alone with God, whose voice echoes in his depths.'”

The Synod document calls for development of women's roles in the church, putting that call in the context of violence against women in some countries and continuing gender inequality.

"A better appreciation of their responsibility in the church can contribute to the social recognizing of their decisive role," it states, suggesting women could participate in church decision-making, "in the governance of some institutions," and in the formation of priests.

Several synod prelates have said they expect Francis to develop themes of the gathering in his own document sometime in the future.

Canadian Cardinal Gérald Lacroix said at a press briefing Friday that the pope has been listening closely to the arguments of the bishops during the three weeks of the gathering.

"He knows the accents, the difficult points," said Lacroix. "We may not have a consensus on everything, but he knows the weight of each argument.”

"The synod is a moment," said Bonny. "We are in a process. If you see what has happened in our church in the last two years since Pope Francis has been elected, this really is an ongoing process."

"People do not expect us to resolve all questions in one moment, but they want the church to travel with them, to listen to them," he said.

*An earlier version of this story incorrectly referred to Familiaris Consortio as an encyclical.​

McCarrick renounces place in College of Cardinals after revelations of abuse