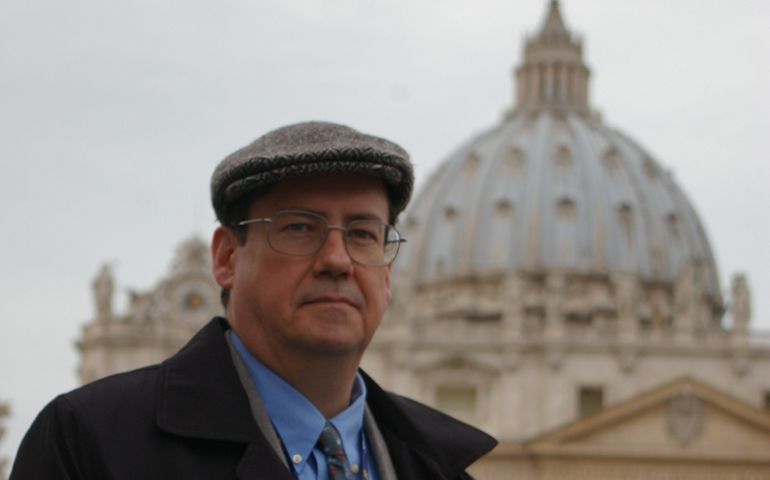 Vatican City — The square outside St. Peter's Basilica was busy the night of Feb. 26. Crews were setting up chairs, barricades, cameras and lights in anticipation of the final general audience of Pope Benedict XVI. Amid the hubbub, pilgrims and visitors milled quietly on the square, giving the scene a somber dignity. Standing in the square in the early evening, NCR staff writer Joshua McElwee and I could see lights burning brightly in the papal apartment, leading to the question: What occupiesd Benedict's mind those last nights of his pontificate?

According to Jesuit Fr. Federico Lombardi, the Vatican spokesman, Benedict's focus was on prayer. In his last Angelus meditation Feb. 24, Benedict told the crowds in St. Peter's Square that the Scripture of the day, the Transfiguration account in Luke's Gospel, was "particularly directed at me, at this point in my life. The Lord is calling me to 'climb the mountain,' to devote myself even more to prayer and meditation." The Angelus was an unremarkable event. Benedict assured the audience that his resignation "does not mean [I am] abandoning the church," but it had the feel of one more thing to check off his to-do list before that helicopter ride to Castel Gandolfo and retirement.

The general audience Feb. 27 was quite another affair entirely. The square was loosely packed with pilgrims, seminarians and religious studying or working in Rome. The crowd spilled not quite halfway down Via della Conciliazione, 150,000 people by Vatican estimates — I believe more people were at the Angelus. Benedict delivered a 20-minute tender, emotional address that was interrupted nine times with applause. The applause began politely but grew more enthusiastic as he spoke. By the end, it was clear he had moved the crowd. The English translation of his talk is touching in parts. Speaking of his eight years as pope, Benedict said, "At times I felt like St. Peter and the Apostles in the boat on the Sea of Galilee, the Lord has given us many days of sunshine and a light breeze, the days when the fishing is plentiful." These days, he said, were "moments of joy and light," but there were other "moments that were not easy."

"There were also times when the water and the wind were rough and … the Lord seemed to sleep" in the boat, Benedict said. He described the papacy as "a great weight" on his shoulders. Without referring directly to his age — he will be 86 next month — Benedict spoke of his growing awareness of diminished strength and how he turned to God to discern what to do. The answer he found was resignation of the Petrine ministry, which he did Feb. 28. McElwee and I returned to the square that night and found the papal apartment dark.

Benedict's legacy is yet to be written, but now with the apartment empty and the general congregations of cardinals meeting a few hundred yards from where I write this, there is little doubt that Benedict has left his successor a church in disarray: The church administration is tainted with rumors of financial scandal, sexual shenanigans and infighting; the church teachers are torn by how to engage the world.

Yet the big lesson for me is that life goes on. However imperfect and halting, the church does engage the world and carries the faithful through their days. The papal apartment is dark, but the poor are still tended to and the sick are healed. The ignorant are instructed and the dead are buried.

As McElwee and I made a quick tour of St. Peter's Basilica before Benedict's last Angelus, we came across an Italian family preparing to have their newborn daughter baptized in the Chapel of the Baptistery, which is to the immediate left as you enter the basilica. The chapel was designed by Carlo Fontana around 1690 and features a deep red stone basin rescued from the sarcophagus of Emperor Otto II, who died in Rome in 983.

The event was surprisingly ordinary, one repeated countless times in countless parishes throughout the world: The parents posed for photos with the swaddled baby and her older sister, a girl of about 5 or 6. (Basilica ushers kept gawking tourists and their cameras away.) Grandparents and godparents beamed. It could have been a scene from any Catholic parish anywhere in the world, a reminder, for me, of the goodness, comfort and life that the church offers.

One last sign that life goes on as the church waits for a new pope: The first morning cardinals walked into the Paul VI Hall for the general congregations, they had to run a media gauntlet. Anyone with a red zucchetto was swooped upon and engulfed by TV cameras and reporters all looking for a soundbite. The experienced cardinals put their heads down and cut through the phalanx without losing a step. Other cardinals had to be rescued by Vatican security and escorted to the gate.

At one point, three scrums of reporters surrounding cardinals were broken up by a beeping trash truck pulling into the area. It backed up to and then pulled through the very gate the cardinals entered to make their way to the hall. Monday apparently is trash day in the Vatican, and the trash collectors, too, have to carry on with their duties.