We need a pope able to think, willing to learn 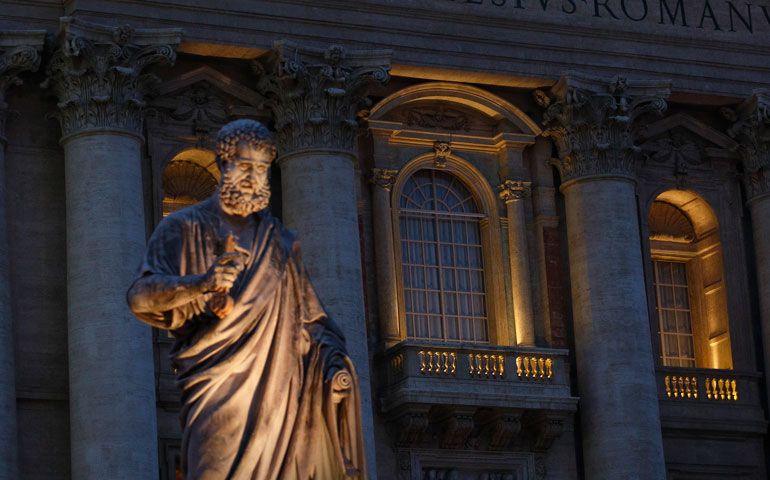 The balcony where the new pope will be introduced to the world is seen at the Vatican behind the statue of St. Peter Feb. 26. (CNS/Paul Haring)
This article appears in the Conclave 2013 feature series. View the full series.

We need a saintly pope, many people say. Perhaps. But I can't forget the advice of Teresa of Avila, doctor of the church. Given the choice between a saintly confessor and one who is a good theologian, trust the theologian, she wrote. Piety is skin without beef if it lacks understanding. That is why the recent Catholic Scholars' Declaration calls for intelligent leadership in the church, as I will explain.

I was teaching sacred Scripture in the major seminary of Hyderabad, India, when in 1968 Pope Paul VI issued his encyclical Humanae Vitae. Its condemnation of artificial means of birth control was a devastating blow to married couples and their pastors in India. I was all the more appalled when I found out that this decision had been taken in spite of the papal commission's findings. A majority had recommended allowing the responsible use of contraceptives. How could a pope be so unwise, I thought? Three months later, I understood.

As a delegate of the Indian Catholic Biblical Association, I attended a meeting in Rome. Pope Paul VI granted us an audience. I stood close to him. I saw his haggard face and read the anxiety in his eyes. The pope was riddled with fear. It dawned on me that Paul was mentally paralyzed: unable to really grasp the intellectual reasons for changing the church's traditional stand on birth control. His fear would lead to more disasters.

At the Bishops' Synod of 1971, the Canadian Conference of Catholic Bishops asked for a study of women's ministries in the church. The question also arose in India. In a research paper for the All India Consultation on New Ministries in 1975, I concluded: "It is the social 'myth' of women's inferiority that has kept women out of the ordained priesthood." Unknown to me, the Pontifical Biblical Commission had, during the same year, reported to Paul VI that there are no scriptural objections to ordaining women as priests. Other churches began to ordain women. True to form, Paul panicked.

His encyclical Inter Insigniores of 1976 tried to slam the door shut. It was accompanied by a document from the Congregation for the Doctrine of the Faith that listed the traditional arguments: Jesus did not want women; it has never been done before; women cannot represent Christ; and so on. Now what is significant in all this is that Paul made such a crucial pronouncement on women's role within just five short years: between 1971 and 1976. And he made it against the advice of his own appointed experts.

The discussion truly was a new question at the time. When I explored the issue in 1975, researching libraries I found that up-to-date publications hardly existed. It was a case of theology having to reexamine the sources.

I do not blame Paul for feeling surprised, even alarmed. Ordaining women as priests would imply major changes. He was right to hold back before committing the church to a definite course. His unforgivable mistake was to refuse to give time for more study and refuse to keep an open mind. Because he did not grasp that he might be wrong, he resorted to suppression. It was a path two of his successors would follow: overly single-minded John Paul II and medieval thinker Benedict XVI.

I am one of the 160 theologians who endorsed the recent Catholic Scholars' Declaration on Authority in the Church (see www.churchauthority.org). We represent more than 100 universities in more than 20 countries. We have come to the conclusion that at the root of today's lack of reform in the church lies an abuse of authority inspired by fear and by lack of what may be called collective intelligence.

In today's world, we have to depend on the wider intelligence of others. We submit ourselves to surgery trusting the knowledge of doctors, nurses and medical researchers. We fly from one city to the next relying on the competence of pilots, aircraft engineers and air traffic controllers. This is why Vatican II told leaders to involve the intelligence of the wider community of faith -- which has not happened. To quote the declaration: Bishops should be elected democratically; the laity should be involved in decision-making; bishops' conferences should be given more autonomy; a Synod of Bishops should exercise real authority.

The academic scene in the church is littered with cases of pioneering theologians censured and dismissed from their teaching posts. They include moral theologians, Scripture scholars, feminists, liberation theologians, church historians and ecumenists. But these are the very professionals whom we as a believing community need to map out new paths in a complex world.

The systematic persecution of our professional thinkers endangers the survival of the church.

Leaders also need flexible intelligence. They should be able to cope with what scientists call a "paradigm shift": looking at facts from a totally new perspective. When Galileo proved that the Earth moved round the sun, he was silenced. The stumbling block was the literal interpretation of Scripture: "The sun stood still in heaven for a full day" (Joshua 10:13). Darwin's theory of evolution was rejected because it contradicted the six-day creation story. The conflict was only resolved by the paradigm shift of appreciating "literary forms."

New scientific insights demand a revised approach to sexual ethics. Hanging on to medieval concepts such as a fixed "natural law" blocks new creative responses. Flexible intelligence reexamines traditional views and grasps that a fresh perspective on ancient questions may hold the answer. The last thing the church needs in our time is the dogged tenacity of closed minds.

Intelligence involves searching, reasoning, discovering unexpected relationships. Intelligence means learning. That is why, while others may call for a saint, I pray for an intelligent pope -- whose integrity and courage will make him a saint.

[John Wijngaards is a theologian and writer, professor emeritus of the Missionary Institute London, and at present director of Housetop Centre.]

Perspective | We need a pope able to think, willing to learn

Pope Francis again pleads for an end of conflict: 'Those who make war forget humanity'