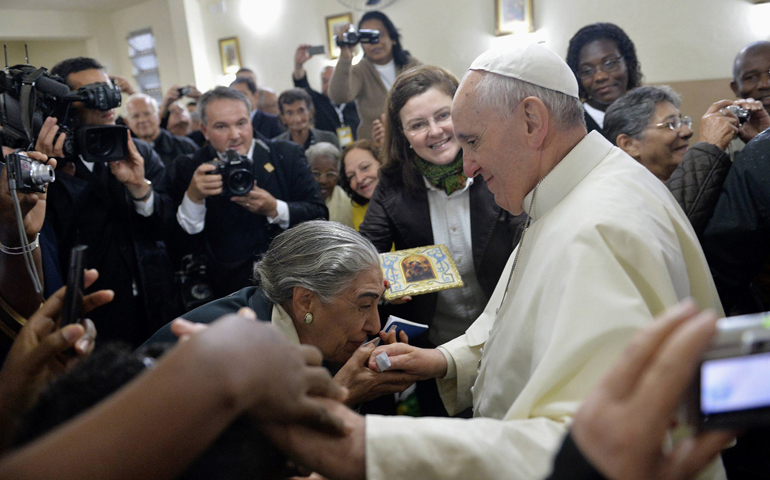 There's a Brazilian saying that in the country's favelas, the sprawling slums that form rings of misery around glittering urban cores, the only things that really work are the gangs and the Pentecostals.

Among other things, it's an indictment of the Catholic church, in tandem with the government and other social institutions, for having abandoned the favelas while others saw an opportunity and swooped in.

In many ways it's unfair, since legions of Catholics actually do heroic work among the poor in Brazil and around the world. But sometimes perception is reality, and on day four of Pope Francis' trip to Brazil, those perceptions may have begun to change.

On Thursday, in a notorious favela of Rio called Varginha, in a small community known as Manguinhos, the Catholic church was unmistakably visible. The pope came to the slum to say, "The church is with you."

Government statistics say that roughly 11 million Brazilians live in favelas such as the one Francis visited, representing 6 percent of the national population and the very poorest of the poor.

On Thursday, the pope held up these people like a mirror to the national conscience.

"The measure of the greatness of a society is found in the way it treats those most in need, those who have nothing apart from their poverty," he said.

In his native Argentina, Francis is already known as the "pope of the villas," the Argentine equivalent of the Brazilian favelas. Both substantively and symbolically, Francis on Thursday made himself the apostle of slum-dwellers everywhere.

"No one can remain insensitive to the inequalities that persist in the world," the pope said in what was by far the most pointedly political and social speech of the Brazil trip so far.

"The Brazilian people, particularly the humblest among you, can offer the world a valuable lesson in solidarity, a word that is too often forgotten or silenced because it is uncomfortable," Francis said.

"I would like to make an appeal to those in possession of greater resources, to public authorities and to all people of good will who are working for social justice: never tire of working for a more just world, marked by greater solidarity."

In context, the pope's speech is likely to be heard as an indirect blessing of the massive protest movement that erupted in Brazil in June, when millions took to the streets to demonstrate against lavish public expenditures on the 2014 World Cup and the 2016 Olympics while basic services such as education, health care, transportation and anti-poverty efforts languish.

Ironically, Francis delivered his forceful speech in the favela shortly after visiting Rio's city palace, where he blessed the Olympic flags and met with a delegation of athletes.

While in Varginha, Francis directly addressed the youth in Brazil, who were the architects and organizers of the June uprising.

"Dear young friends, you have a particular sensitivity toward injustice, but you are often disappointed by facts that speak of corruption on the part of people who put their own interests before the common good," the pope said.

"To you and to all, I repeat: Never yield to discouragement, do not lose trust, do not allow your hope to be extinguished."

The pope also issued a rebuke that, in context, is almost certain to be seen as a criticism of the Brazilian government.

Rio de Janeiro has adopted a strategy of "pacifying" its favelas, attempting to uproot organized crime and narco-traffickers. For some time, the favela Francis visited Thursday was known as Rio's "Gaza Strip," the scene of bloody clashes among the various gangs vying for control as well as between the gangs and the police.

Last year, the police and security services unleashed a massive offensive, and the city boasts that today, peace has returned.

Critics, however, insist that if pacification means dispatching phalanxes of police but not resources for education, sanitation, fighting hunger and economic development, then it's destined to be impermanent.

Francis clearly seemed to align himself with the critics.

"No amount of 'peace-building' will be able to last, nor will harmony and happiness be attained in a society that ignores, pushes to the margins or excludes a part of itself," the pope said.

"A society of that kind simply impoverishes itself, it loses something essential."

The pope also offered flashes of his homespun style. At one stage, he encouraged people to be generous, even with limited means, by quoting a Latin American proverb: "You can always add more water to the beans."

Francis also argued that in the fight against poverty, offering material assistance isn't enough. It's also critical, he suggested, to build up the moral fiber of a society by defending certain core values:

How much real-world difference the papal visit might make remains to be seen. Blessed John Paul II visited another community within the Varginha slum in 1980 saying similar things, and obviously its underlying problems hardly disappeared in the intervening 33 years.
Nonetheless, Francis is the pope who committed himself shortly after his election in March to the vision of a "poor church for the poor." At least for one riveting moment Thursday in a Brazilian slum, he seemed to deliver.