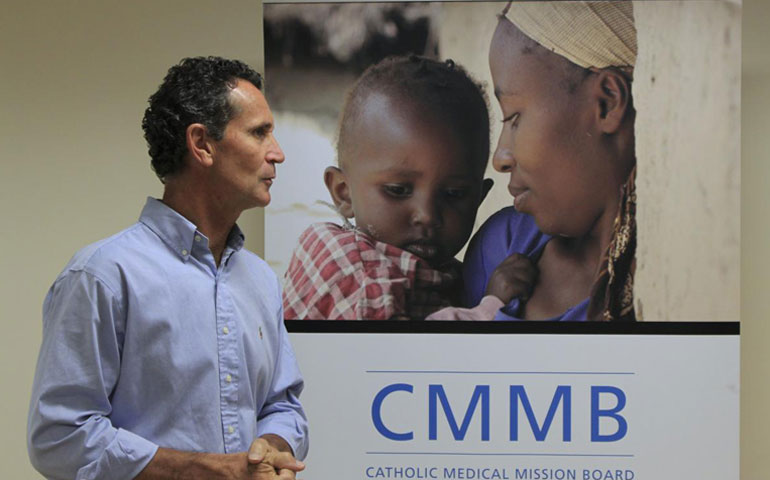 Bruce Wilkinson, president and CEO of the Catholic Medical Mission Board

For the past two years, there has been a white-hot debate about making health care available to all in the United States. President Barack Obama's signature piece of legislation, the Affordable Care Act, was passed, signed into law and upheld by the Supreme Court. The libertarian Republican Party has repudiated it. Several Republican governors have even rejected the expansion of Medicaid that is substantially paid for under the act by federal funds. Major components of the law have yet to be implemented.

Meanwhile, for more than 100 years, one organization has quietly but effectively exported the provision of U.S. health care to the poorest of the poor living in the farthest reaches in the world.

New York City-based Catholic Medical Mission Board dates its inception to 1912. Dr. Paluel Joseph Flagg, an anesthesiologist at now closed St. Vincent's Hospital, ministered to lepers in Haiti. He sent a doctor and her family to China in 1914. He expanded the medical mission of the New York archdiocese. Later the Catholic Medical Mission Board affiliated with the Society for the Propagation of the Faith. Then-Fr. (later Archbishop) Fulton Sheen, the popular radio and television preacher, joined the board in 1949 and served for 26 years.

Today, under the governance of a largely lay board of directors, the organization places medical volunteers, distributes millions of dollars in donated medicines, and implements critically important programs that make health care available to thousands of people.

The Catholic Medical Mission Board is one of the largest not-for-profits based in New York City. In 2011, its revenues were more than $315 million and 97 percent went directly to services. Support for the organization comes from more than 37,000 individuals, 47 foundations, 54 corporations, 38 trusts and estates, 190 health- and faith-affiliated organizations, and two federal grants.

"In 2012, we distributed a record $1 billion of pharmaceuticals and medical supplies to communities in the developing world," said Bruce Wilkinson, the new president and CEO (see sidebar below).

From its inception, Haiti has been a primary area of service for the organization, which has 62 staff there, including doctors, finance and human resources personnel, and those working in the field nationwide.

"We work with different partners like hospitals, clinics, schools," said Dr. Dianne Jean-Francois, country director in Haiti. "We are focused on child health [and] HIV/AIDs care, treatment and prevention.

"We are looking at life-skill training, with helping the minister of health with the health system by providing training to the university, to the Ministry of Health staff and also work at the level of the community," she said.

The Catholic Medical Mission Board has a good reputation in Haiti, Jean-Francois said. "When CMMB says it is going to do something, we achieve what we say we are going to do," she said.

One success is the Born to Live program. Forty percent of infants born to mothers with HIV will be infected. Intervention is critical. This program includes voluntary counseling and the administration of antiretroviral drug therapies during pregnancy and after birth in order to prevent mother-to-child-transmission of HIV.

Another successful program was created in response to the 2010 earthquake. The Catholic Medical Mission Board has provided 1,000 Haitian amputees with prostheses and physical therapy.

"We need to work together on sustainability so people of Haiti can take care of themselves in the future," Jean-Francois said.

A key element of the organization's success is its partnerships, such as the one with a major U.S. pharmaceutical company and its foundation, the Bristol-Myers Squibb Foundation.

In 1999, Bristol-Myers Squibb and its foundation committed $150 million for a program called Secure the Future to develop and replicate innovative and sustainable solutions for people affected by HIV/AIDS in sub-Saharan Africa.

The Catholic Medical Mission Board and the Bristol-Myers Squibb Foundation joined forces on the Secure the Future program. It has been a real success.

The partnership "was not just about more funds but it captured all key components of partnerships -- engagement, transparency and open communication, said Phangisile Mtshali, director of corporate philanthropy at Bristol-Myers Squibb. "It was a true partnership where there was alignment of needs and vision."

"Both organizations wanted to serve the hardest to reach communities and truly indigenous community-based interventions," Mtshali said. "We planned jointly, we reviewed potential grantees jointly and we co-funded regardless of who had solicited the proposal. The common theme was to support the communities truly in need and those involved in home-based care and care of orphans and vulnerable children."

Another collaboration with the foundation involved the Choose to Care initiative, supporting 100 projects in five African countries. The initiative provided palliative care, orphan care and support and HIV education and hospice care. The Catholic Medical Mission Board also collaborated with the Southern African Catholic Bishops' Conference on this program.

"It harnessed the faith-based community, especially the Catholic community, infrastructure and sentiment," Mtshali said. "Most importantly it moved away from 'charity' to capacity-building, accountability and sought for measurable effects in the benefiting communities while strengthening the institutions."

"We are collecting data downstream in places such as Honduras, Haiti, Zambia, South Africa, as part of our assurance that we are using these pharmaceuticals in the right way and at the same time they are creating impact at the end-user level and not creating any harm," he said.

To mark its centennial anniversary, the Catholic Medical Mission Board celebrated a Mass of Thanksgiving at St. Patrick's Cathedral in New York Dec. 16. At a gala dinner the next evening the group presented James M. Cornelius, chairman of Bristol-Myers Squibb, with its Global Health Care Leadership Award, and gave Cardinal Timothy Dolan of New York its International Founders' Award.

Bruce Wilkinson, appointed president and CEO of the Catholic Medical Mission Board on June 1, 2012, has spent his entire career dedicated to alleviating poverty in the developing world.

"I've seen CMMB's work through various lenses," Wilkinson said. "I ran into their work in East Africa and West Africa, seeing their pharmaceuticals and medical supplies being distributed in hospitals and clinics. While living in Zambia, I got to know CMMB's country director, Dr. Moses Sinkala."

Wilkinson brings to his new role deep experience in the primary areas of focus for the organization, namely, maternal and child health, HIV/AIDS, malaria, behavioral change and communications, volunteer deployment, and the provision of medicines and medical supplies.

In the late 1970s, Wilkinson joined the Peace Corps right out of college, serving in Ghana. Later he served with World Vision International as its West Africa regional director (in Senegal), senior vice president of international programs (in Washington, D.C.) and regional vice president for Southern Africa (in Zambia).

According to his official biography, Wilkinson also served as chief of party of RAPIDS, a USAID comprehensive HIV/AIDS program in Zambia. His leadership resulted in RAPIDS being integrated in the national HIV/AIDS development plan of Zambia, leveraging a U.S. government investment of $59 million into a public-private partnership of cash and in-kind resources totaling $250 million over five years.

Wilkinson is a graduate of Gordon College in Wenham, Mass., and has a Master of Buiness Administration from the Judge Institute of Management Studies, the University of Cambridge, England. He and his wife, Linda, have five children.

A version of this story appeared in the Feb 1-14, 2013 print issue under the headline: Exporting US health care to serve the poor around the world.