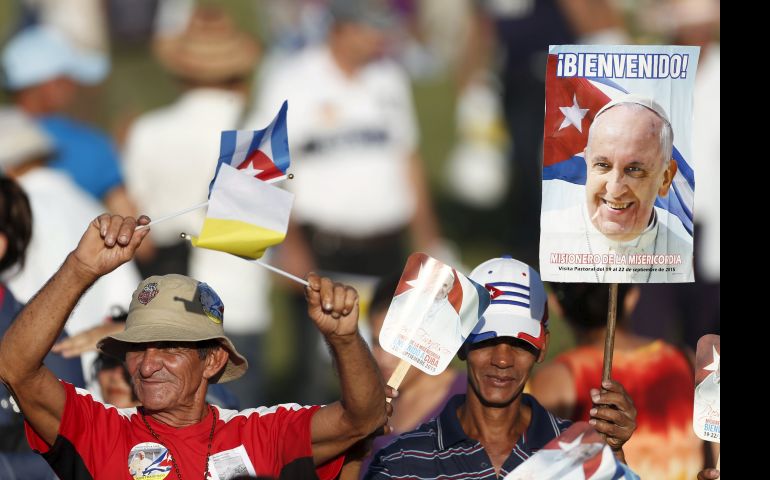 People await the arrival of Pope Francis in Revolution Square in Holguin, Cuba, Sept. 21. (CNS/Reuters/Edgard Garrido)
This article appears in the Francis in Cuba feature series. View the full series.

HAVANA, CUBA — Pope Francis strikingly touched on the core of the Christian message in a homily to hundreds of thousands in this Communist nation Monday, reflecting on the power of Jesus to transform, heal and send forth to share faith with others in love and service.

Travelling some 400 miles from Havana to the eastern Cuban city of Holguin, the pontiff celebrated his second Mass in as many days in a Square named for the island nation's Marxist revolution. And again, he spoke to the most basic roots of the Christian call.

In a reflection on Jesus' choosing of his disciple Matthew, a tax collector, the pope placed emphasis on the need to remain open to God's call and to recognize it as ultimately God who manifests transformation and service for the good of others, not humans.

"Jesus’ love goes before us, his look anticipates our needs," Francis told crowds at the Mass, explaining how Jesus looked with mercy at Matthew and chose him to join his band of followers.

Jesus, the pope said, "can see beyond appearances, beyond sin, beyond failures and unworthiness. He sees beyond our rank in society."

"He sees beyond this, to our dignity as sons and daughters, a dignity at times sullied by sin, but one which endures in the depth of our soul," said the pontiff. "He came precisely to seek out all those who feel unworthy of God, unworthy of others."

Then, in an open-ended query that may resonate with believers around the world, Francis said Jesus challenges us with a daily question: “Do you believe?"

Calling on people to turn their eyes toward Jesus, the pontiff said you can find him in Mass and prayer, or even "in our brothers and sisters, especially those who feel excluded or abandoned."

"May we learn to see them as Jesus sees us," Francis asked the crowds. "Let us share his tenderness and mercy with the sick, prisoners, the elderly and families in difficulty. Again and again we are called to learn from Jesus, who always sees what is most authentic in every person, which is precisely the image of his Father."

Francis was speaking in Holguin Monday on his second full day of a three-city tour in Cuba. He leaves the island nation Tuesday to visit the U.S. cities of Washington, New York, and Philadelphia.

The Cuban swing of the joint trip to the Americas has thus far seen the pope speak in powerful and compelling ways -- calling for continued reopening of relations between Cuba and the U.S, stressing that Christian service is "never ideological," and comprehensively outlining his vision for the global Catholic church.

In a 25-minute off-the-cuff speech to bishops, priests, and religious in Havana Sunday evening, the pontiff gave what resembled a manifesto outlining his vision for the global Catholic community.

With beads of sweat dotting his face in Havana's incredibly hot and humid Cathedral of The Virgin Mary of the Immaculate Conception, Francis begged the religious: "Love poverty like you love your mother."

"Wealth impoverishes," said the pope. "It takes away the best that we have. It makes us poor. It places our faith in something else."

At a public Mass earlier Sunday in Havana's Revolution Square, the pontiff told Cubans packed into the traditional gathering point for political rallies that service means "putting our brothers and sisters at the center" and sometimes suffering for them.

In pointed words for a nation partly founded on mid-20th-century political zeal, the pope continued: "Service is never ideological, for we do not serve ideas, we serve people."

Francis is scheduled to continue his Cuban visit Monday with a public blessing for the city of Holguin before heading about 90 miles south to the city of Santiago, where Monday night he will meet with the country's bishops and visit a shrine dedicated to a Cuban apparition of Mary named Our Lady of El Cobre.

On Tuesday, the pope will celebrate Mass at the shrine and host a meeting with families before heading on to Washington.

The Gospel story read at the Mass in Holguin Monday morning of Matthew's selection as a disciple is known to have special significance for the pontiff, who took his episcopal motto ("by having mercy and by choosing") from the story.

"We know that Matthew was a tax collector: he collected taxes from the Jews to give to the Romans," the pontiff explained in his homily.

"Tax collectors were looked down upon and considered sinners; as such, they lived apart and were despised by others," he said. "One could not eat, speak or pray with them. For the people, they were traitors: they took away from their own to give to others."

"Jesus, on the other hand, stopped; he did not quickly take his distance," said Francis. "He looked at Matthew calmly, peacefully. He looked at him with eyes of mercy."

"He looked at him as no one had ever looked at him before," said the pope. "And this look opened Matthew’s heart; it set him free, it healed him, it gave him hope, a new life."

World | In Communist Cuba, Francis asks: 'Do you believe?'