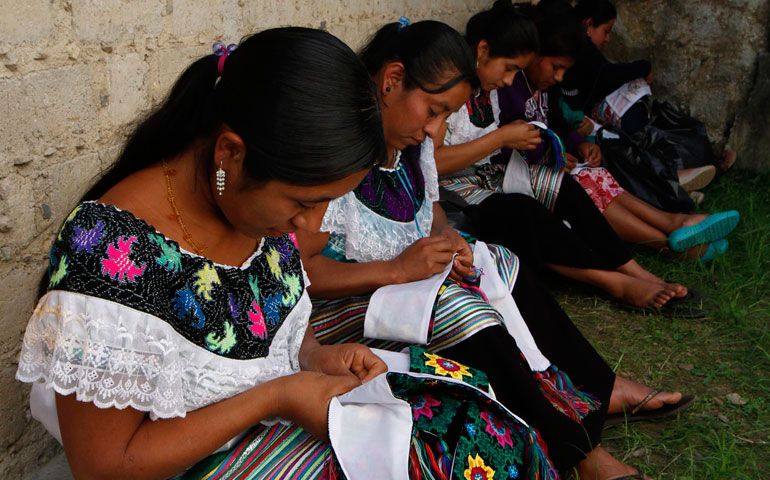 In Chilón, Chiapas, on Jan. 20 in Mexico, indigenous women embroider vestments that Pope Francis will use during his Feb. 15 visit to San Cristóbal de las Casas. (Newscom/Notimex/Javier Lira)
This article appears in the Francis in Mexico feature series. View the full series.

Mexico City — The indigenous people in Mexico's southern state of Chiapas hope that Pope Francis' trip will revive dreams of social justice represented to many here by the Zapatista movement of the mid-1990s.

The armed 1994 uprising lasted less than two weeks. A government truce ended days of bloodshed, but a tense two-decade standoff has remained in place.

Despite its short duration, the Zapatista rebellion shocked Mexico and much of the world. It drew widespread support from leftists around the globe with demands calling for indigenous rights and fierce opposition to economic globalization. But now, more than 20 years later, many activists say that little has changed for the indigenous people whose rights the Zapatistas advocated. The group itself remains secretive and rarely gives interviews or grants outsiders access to the half-dozen communities it controls.

Poverty remains an overriding problem, as much as it was in 1994 before the uprising. Critics accuse the Zapatistas of being their own worst enemy, refusing all government aid programs. In addition, in other parts of Latin America where indigenous people have gained power, events have overshadowed the ongoing economic woes of southern Mexico where the Zapatistas operate.

For instance, Evo Morales took office in 2006 as the first indigenous Bolivian president. Aymara and Quechua Indians hold positions in the presidential cabinet and host some national news shows.

"The most challenging issue is that the indigenous culture of southern Mexico is under siege," said Trinitarian Fr. Juan Molina. He is director of the Collection for the Church in Latin America and associate director in the Office of National Collections at the U.S. Conference of Catholic Bishops.

"Globalization has made the situation more acute," Molina said. "Now, many individual communities feel at a loss. We see land-grabbing and development. A way of life is under attack."

In the years since the Zapatistas first made headlines, the Chiapas town of San Cristóbal de las Casas, also known by its native Tzotzil name, Jovel, has become a tourist destination, highlighting the gap between indigenous and non-indigenous people.

"It has become a kind of hippie center, for trust-fund babies," said Sacred Heart Sr. Carlota Duarte, director of the Chiapas Photography Project, which has trained more than 200 indigenous photographers.

"It is almost a parody of excessiveness, she said. "There are dozens of sidewalk cafés, restaurants, entertainment, food and wine and designer clothes. In the context of poor indigenous women and children selling things on the street, it's really kind of repugnant. The indigenous people become subjects of curiosity and commentary."

The Zapatista uprising in Chiapas began on Jan. 1, 1994, the date that the North American Free Trade Agreement (NAFTA) took effect. The timing was not accidental. The Zapatistas -- shorthand for Zapatista National Liberation Army, also called the EZLN -- wanted to undermine the treaty's free-trade goals and embarrass Carlos Salinas de Gortari, then president of Mexico.

The Zapatistas' stated goal was greater rights for the indigenous people of Chiapas. They saw treaties such as NAFTA favoring corporate interests without any benefit for the people of Chiapas. The group also was concerned that the goods provided by local workers would be replaced with imports.

Despite the attention it garnered in the 1990s -- with protest marches, nationwide tours, jungle conventions and often caustic, wry communiqués -- the group has largely faded from view, often of its own choosing, by withdrawing into indigenous communities for long periods.

The goals of the Zapatistas were laid out in their Declaration From the Lacondon Jungle. Its 11 points call for improvements, including work, land, shelter, food, health, education, independence, freedom, democracy, justice and peace.

Many people in Chiapas say the group's most significant accomplishment was pushing the Mexican government to enact vast anti-discrimination measures in the constitution in 2001. A Zapatista caravan crossed the country to the capital, gathering support for the measure. When the caravan reached the capital, masked rebels made dramatic speeches to a shocked Congress and a nation enthralled by the movement and its members.

But lawmakers had the final say after the theatrics of the moment faded. The final piece of legislation watered down the sections expanding indigenous autonomy and control over land and natural resources. Infuriated, the Zapatistas withdrew from public view to run their own schools and health clinics without reliance on the government.

Some people see this withdrawal as a continued push for indigenous autonomy from the state. Others, however, point out the dire economic conditions of many of these communities, most of which consist of poor farmers striving to make a living by converting shrinking jungles into farmland.

"A lot of natural resources have been depleted in Chiapas," said Kathy Seib Vargas, who was a Maryknoll sister for five years and afterward a Maryknoll lay missionary for 25 years, retiring in 2010. She spent most of her time in Chiapas.

"There used to be huge mahogany forests but the trees were cut down for roads for industry and not to meet the needs of the population. The ecological degeneration of the forests is astronomical. Water sources are now drying up."

In addition to ongoing poverty, the Zapatistas have come in for criticism politically. In 2006, the Zapatistas did not endorse leftist candidate Andrés Manuel López Obrador in the presidential elections. He lost by about half a percentage point, and some accused the guerrilla movement of withdrawing so much it was hurting the very people who support its agenda.

"It is good the pope is going to Chiapas because the issues raised by the Zapatistas have not been resolved," said Ernesto Castañeda, assistant professor of sociology at American University in Washington. "Chiapas is one of the poorest states in Mexico. The Zapatistas had demanded a recognition of minority rights, but that has not really happened."

In 2014, ski-mask-clad members and supporters of the Zapatista movement gathered to mark the 20th anniversary of the uprising that garnered the world's attention. But the issues now facing the region have expanded to include problems not considered in 1994.

Last October, thousands of Mexican teachers went on strike in the southern states of Michoacan, Guerrero, Oaxaca and Chiapas, staging marches, blocking roads and taking over businesses to demand that the government resume a dialogue with them concerning their demands.

The union for more than two years has been staging mobilizations against the educational reforms of President Enrique Peña Nieto. In particular, the union rejects the obligatory evaluation of teachers without taking into account the particular characteristics of the country's regions.

Another issue facing southern Mexico that no one could have anticipated 21 years ago centers on the numbers of families fleeing gang violence from Central America. Thousands of unaccompanied children have been caught at the American border with Mexico since 2013.

Chiapas and other southern Mexican states have a heavy military presence now in part to confront the lawlessness of the border and to keep migrants out at the behest of the American government, which wants to prevent them from crossing Mexico into the U.S. That problem is one Chiapas must contend with along its border with Guatemala.

"We risk imposing a military solution on the region without looking at root causes of the instability and finding peaceful, economic solutions," said Richard Coll, a foreign policy adviser for Latin America and global trade in the Office of International Justice and Peace at the U.S. bishops' conference. "The United States is not without its degree of responsibility here. When unaccompanied migrants arrived, part of the U.S. response was, 'You all have to keep Central American migrants out of your country so they don't come to ours.' So, they've ramped up security."

In addition to Central American migrants, Chiapas is seeing its own people leave in droves.

"Since the Zapatistas, we've gone from no migration of indigenous people from here to virtually every family knowing someone who has left," said John Haviland, professor of anthropology at the University of California, San Diego. Much of his work focuses on Mayan-speaking farmers in Chiapas.

"They go because they are poor and send money back to their families," he said. "A lot of Indians have been caught up in illegal merchandise -- human trafficking, drugs. The place has been transformed by continuing poverty."

Many activists now see the pope's February visit as a way to direct the world's attention back to Chiapas, as it was more than 20 years ago.

"He has been sensitive to indigenous communities," Molina said of the pope. "He wants them to feel the church supportive of their institutions and way of life and affirm rights that all cultures have."

[J. Malcolm Garcia is a freelance writer and author of The Khaarijee: A Chronicle of Friendship and War in Kabul and What Wars Leave Behind: The Faceless and the Forgotten.]