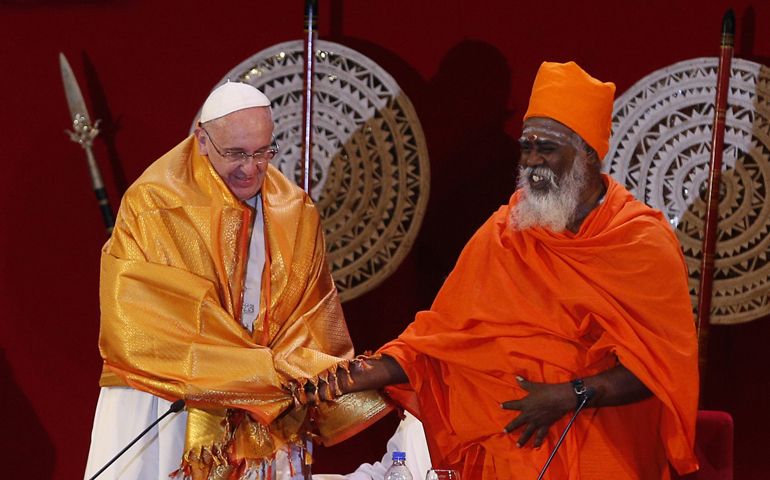 Pope Francis shakes hands with Hindu Kurukkal SivaSri T. Mahadeva after receiving a robe from him during a meeting Tuesday with religious leaders at the Bandaranaike Memorial International Conference Hall in Colombo, Sri Lanka. (CNS/Paul Haring)
This article appears in the Francis in Sri Lanka feature series. View the full series.

Colombo, Sri Lanka — Embarking on a key mission of his visit to this island nation -- shoring up efforts at interreligious dialogue to heal wounds from a 26-year civil war -- Pope Francis on Tuesday said such work should not blur the lines between different religious convictions.

In an address to leaders of Buddhist, Hindu, Muslim and other Christian denominations, Francis said he sought to reaffirm respect for each religion's beliefs but to ground such respect in "a full and forthright presentation of our respective convictions."

Citing from the Second Vatican Council document Nostra Aetate, Francis said: "For my part, I wish to reaffirm the church's sincere respect for you, your traditions and beliefs."

"It is in this spirit of respect that the Catholic church desires to cooperate with you, and with all people of good will, in seeking the welfare of all Sri Lankans," he continued.

Then, Francis followed with: "But, as experience has shown, for such dialogue and encounter to be effective, it must be grounded in a full and forthright presentation of our respective convictions."

"Certainly, such dialogue will accentuate how varied our beliefs, traditions and practices are," the pope said. "But if we are honest in presenting our convictions, we will be able to see more clearly what we hold in common. New avenues will be opened for mutual esteem, cooperation and, indeed, friendship."

Francis spoke Tuesday at the end of the first of two and a half days he is spending in Sri Lanka, located off the southern tip of India. The visit, which comes only five days after a contentious presidential election in the country, has been marked so far by several calls for peace and reconciliation between the two main ethnic groups that fought in the war.

In saying that seeking interreligious dialogue need not harm one's own religious convictions, Francis is likely trying to make dialogue seem more attractive in a country where Christianity is a small minority of the population.

Francis pointed to religious leaders as crucial elements in continuing to heal wounds and facilitate reconciliation after the civil war. He also repeated his frequent emphasis that religion cannot be used for violent purposes.

"For the sake of peace, religious beliefs must never be allowed to be abused in the cause of violence and war," the pope said. "We must be clear and unequivocal in challenging our communities to live fully the tenets of peace and coexistence found in each religion, and to denounce acts of violence when they are committed."

That message was echoed by Sri Lankan Muslim leader Ash-Sheikh M.F.M. Fazil, who in brief remarks addressed the recent murders in Paris of the staff of the magazine Charlie Hebdo.

"I will fail in my duties if I do not mention the attack, the killings, that took place in France, in Pakistan," Fazil said. "Children were massacred and killed in the name of Islam."

"As we know very well, Islam has no relationship with regard to such practices and evil conduct and deeds," he continued. "Islam promoted peace, love, and harmony.

"Terrorists, extremists -- they have used many religions as a shelter to cover their own evil deeds," he said. "Islam is used by these extremists and terrorists in harming and imposing corruption on this planet."

As a sign of the diversity of the island, the interreligious encounter Tuesday included a welcome from a Catholic bishop, a chant from a Buddhist monk, blessings from Hindu and Muslim leaders, and an ecumenical Christian prayer led by the head of Sri Lanka's Anglican church.

Many of those in attendance at the event were wearing the distinctive robes of Buddhism, some with large fans. There was also an honor guard of young men in traditional outfits lining the steps to the auditorium where the event was hosted.

Francis was one of two people who delivered talks at the encounter, along with Buddhist leader Niyangoda Vijithasiri Thero.

Before Francis' arrival at the event, one speaker briefly recounted the pope's life story and his work since his election in March 2013, calling him "an extraordinary man of interreligious dialogue, a messenger of peace and an ambassador of harmony."

Francis had come to the dialogue directly after a private state visit with Sri Lanka's newly elected president, Maithripala Sirisena, who unexpectedly ousted his predecessor with 51.2 percent of the vote on Thursday. He was sworn into office Friday.

Sirisena replaced Mahinda Rajapaksa, who had ruled the country since November 2005 but had been criticized for assuming a number of powers into his executive office.

During the state visit, Sirisena and Francis exchanged gifts and posed briefly for photos. They did not give public speeches because they had both spoken upon Francis' arrival at the Colombo airport Tuesday morning.

Francis is visiting Sri Lanka as the first trip in a two-part Asian voyage that will see him continue on to the Philippines on Thursday. The pontiff is spending Tuesday in the Sri Lankan capital, located on the southwest coast of the island, before heading north Wednesday to visit Madhu, the area that was most affected by the war's violence.

When Francis travels to Madhu, he will visit a popular Marian devotional site, Our Lady of Madhu Church. Reconciliation, dialogue, and encounter will likely be the themes again at the site, which was shelled numerous times during the war.

The terminally ill's right to die: a debate

Pope says war is senseless slaughter, can always be avoided

What happens if millennials leave religion?